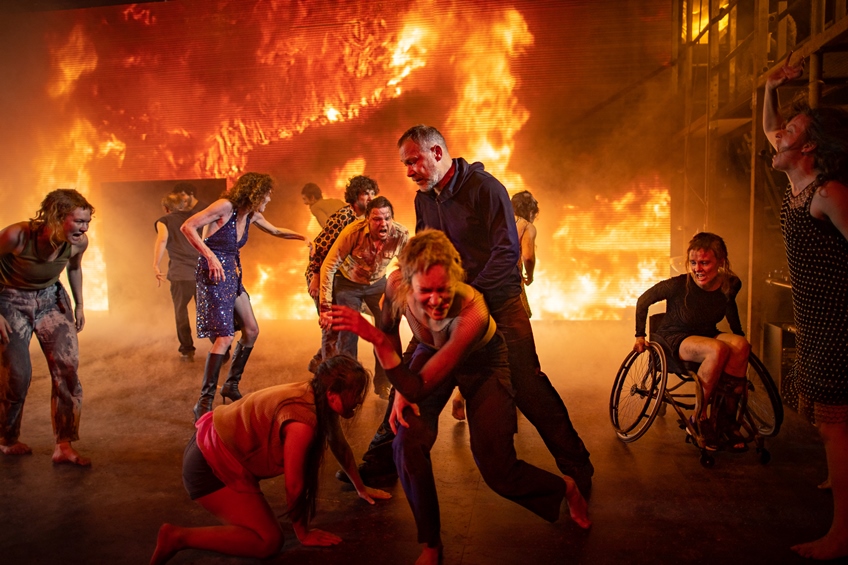 Yves van Hov’s latest epic – 3 hours 45 minutes, including the interval – for the International Theater in Amsterdam – is based on six tragedies of Euripides and one of Aeschylus. The theme of the Trojan War and the fall of the House of Atreus, the story of murder and revenge.

Senseless killings continue for generations to come. A father kills his daughter. His wife takes her lover while he is at war and they kill him on his return. Her children kill her and her lover, and the children are killed for killing them. And yes, it goes on and on, indefinitely.

Van Hove does for these ancient Greek classical plays what he did for Shakespeare’s historical plays and Roman tragedies. It’s important, he says, to play these stories these days. The actors perform in Dutch with English subtitles. It’s not 3 hours 45 minutes at all.

Seth is like a big wide stage at a rock festival. The staging, vocally, visually and physically, is fascinating. The scene is often filled with smoke. There is a soundtrack to doom metal. The drums are beating. The gating and flickering lights are intense and insane. The images projected on the huge screen are amazing. Cities are burning. The choreography is primary and created for non-professional dancers.

The second half is dedicated to Electra and Arrest. Inhumanity continues. Horror follows horror, wild, horrible, barbaric. The audience was shocked when Electra cut off Egisfu’s dead penis.

Who is to blame at the beginning of the war? Helen for escaping from Paris; but ultimately the gods are to blame. It was the goddess Artemis who insisted that Agamemnon sacrifice his young daughter Iphigenia, the price for the wind that the Greek army so desperately needed to sail to Troy.

The war lasted 10 years. Troy was completely destroyed. All the men were killed. The women were in slavery. Nothing has changed in 2,500 years. It would be impossible to watch The age of rage and not to think of Putin’s invasion of Ukraine and the enormous loss of life and destruction of the towns and villages it brought.

David Jeffrey reveals he offered to resign as Ballymena manager after...

Pregnant Sam Frost revealed that she threw up so much she...