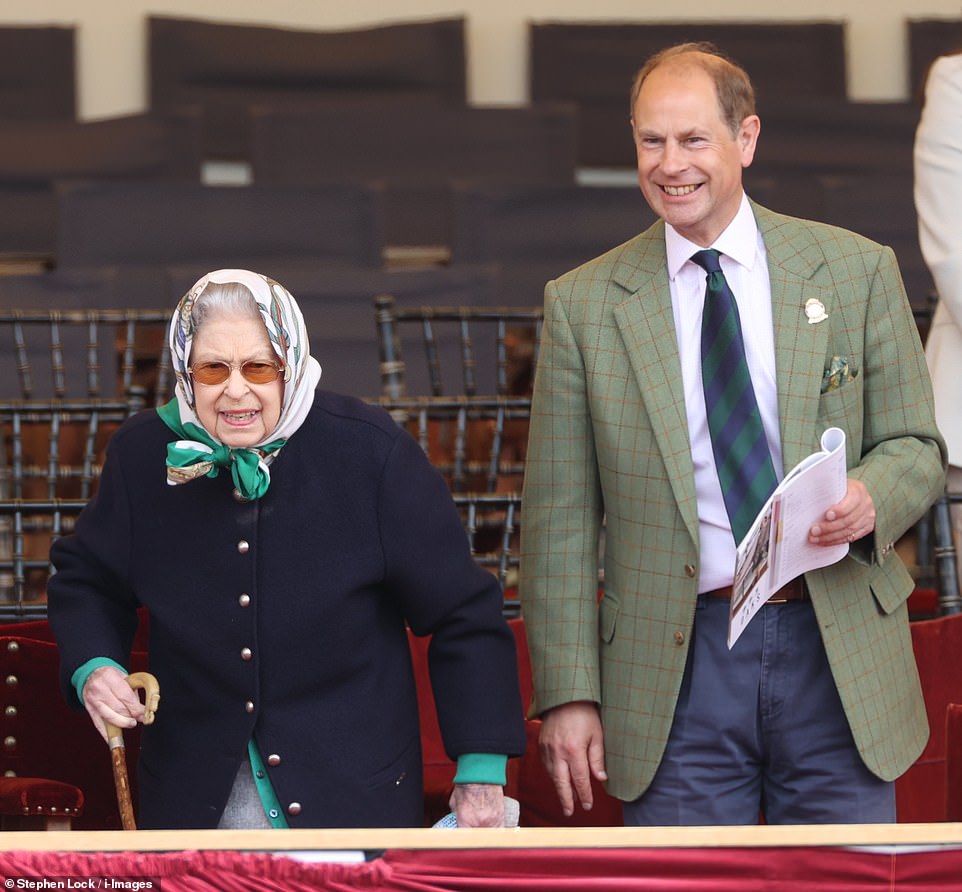 The Queen was back on her feet and brimming with excitement today as she visited the Royal Windsor Horse Show – one of her favourite events of the year – despite ongoing mobility problems forcing her to miss the State Opening of Parliament this week.

The 96-year-old monarch, wearing sunglasses, pink lipstick and dressed casually in a white blouse and dark cardigan, looked in good health and spirits as she watched her horse Balmoral Leia compete.

She wound down her window and chatted animatedly to fellow festival-goers having never missed the event in the past 79 years, and the crowds looked equally thrilled to see her, clapping and cheering her as she arrived.

After missing the Queen’s Speech on Tuesday on doctor’s orders as she struggles to walk or stand for long periods, Her Majesty chose to stay in the passenger seat of her Range Rover, where she spoke to passers-by and watched horses in the parade ring.

And after an hour or so, with the aid of a stick, she walked slowly around 30ft to her seat in the grandstand between her son Prince Edward and Penny Knatchbull, Countess Mountbatten of Burma. And looked pleased as punch to be there.

It came after made a secret trip to see her own horses this week as she missed the first day of the event yesterday. 14 of her animals will be taking part over the coming days, and the monarch was visibly delighted to see them in action.

The Royal Windsor Horse Show was also beloved of her husband, Prince Philip, who died last April at the age of 99, so attending today will be both a poignant and a happy memory of their 73-year marriage.

The Queen is back on her feet today as she attended the Royal Windsor Horse Show, walking around 30ft to her seat next to her son Prince Edward this afternoon 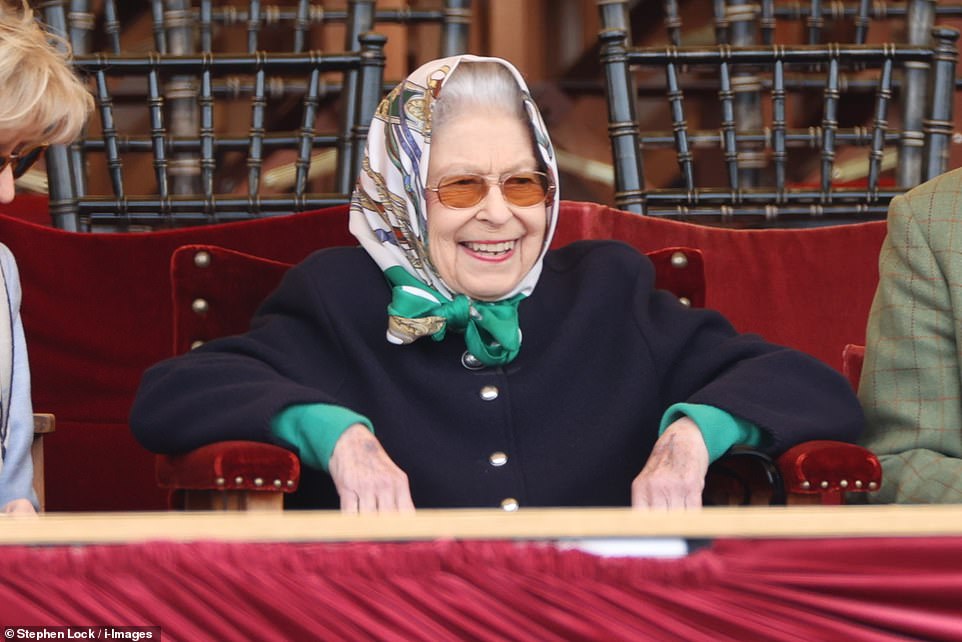 The smiling monarch, in sunglasses and a trademark headscarf, smiled as she watched 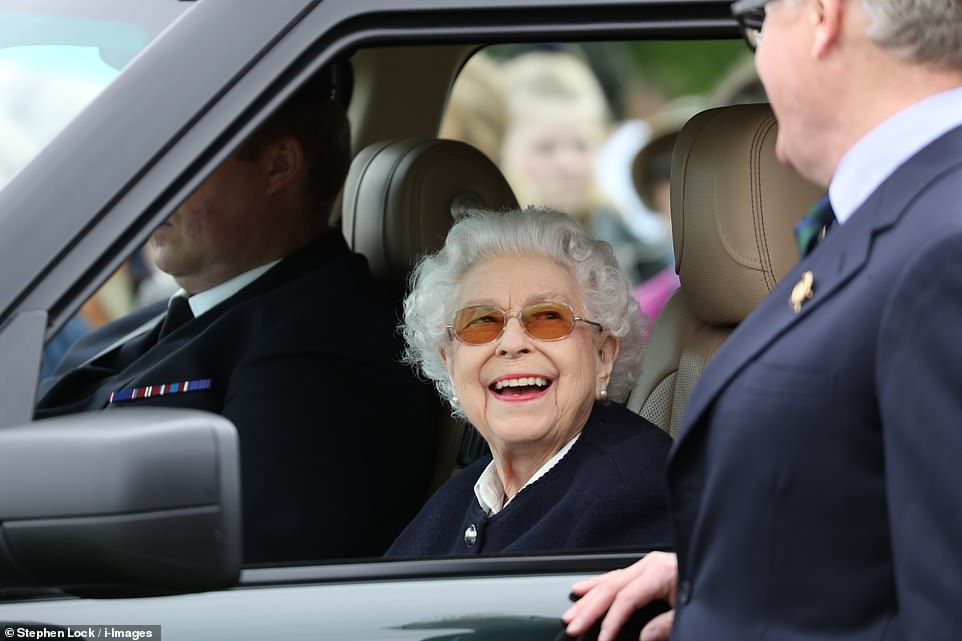 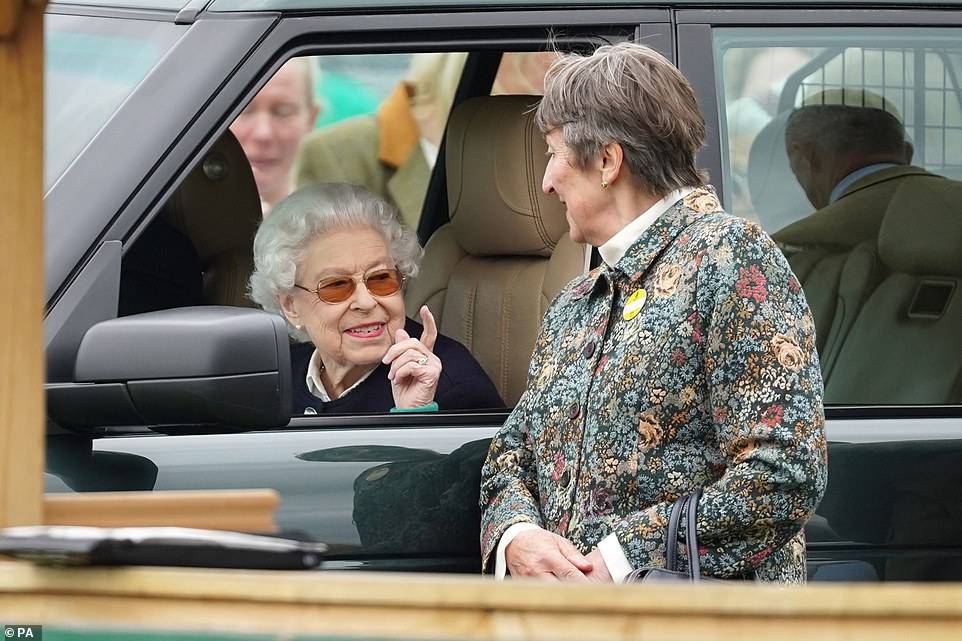 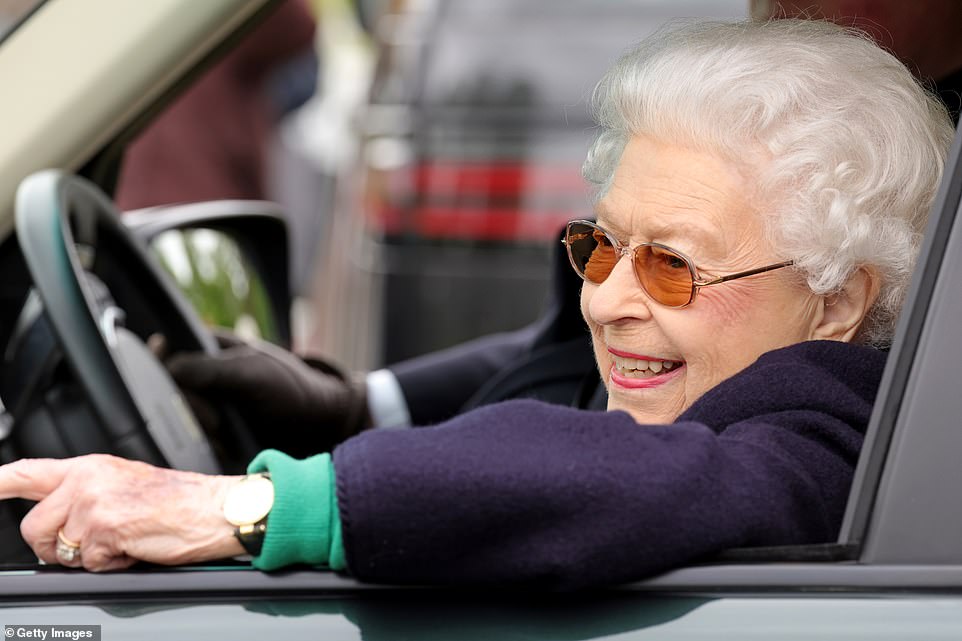 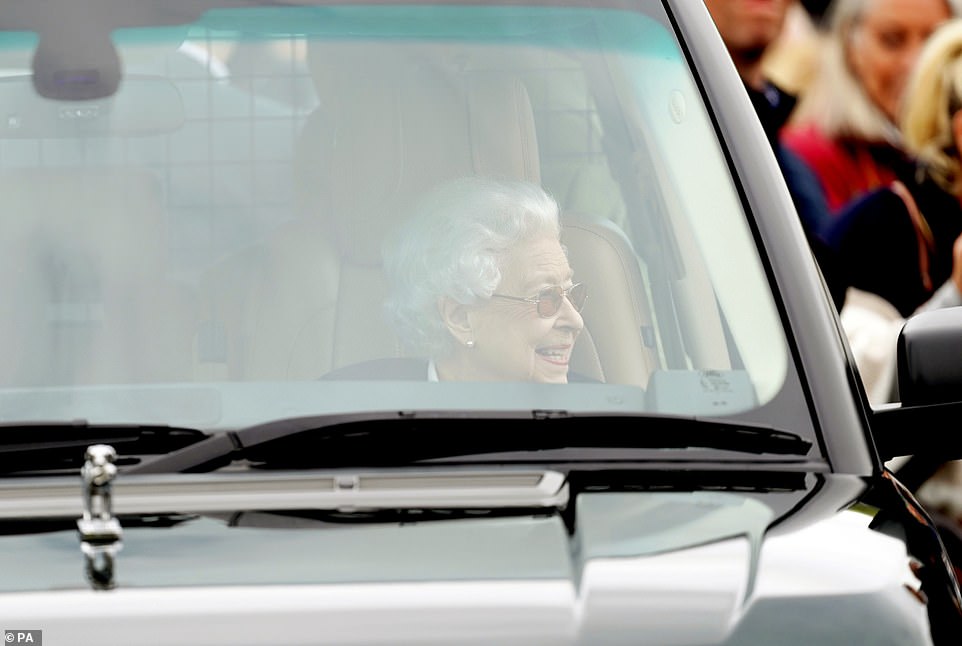 The Queen smiled to the crowds and soaked up the atmosphere from her Range Rover, but she chose to stay in the car due to mobility problems 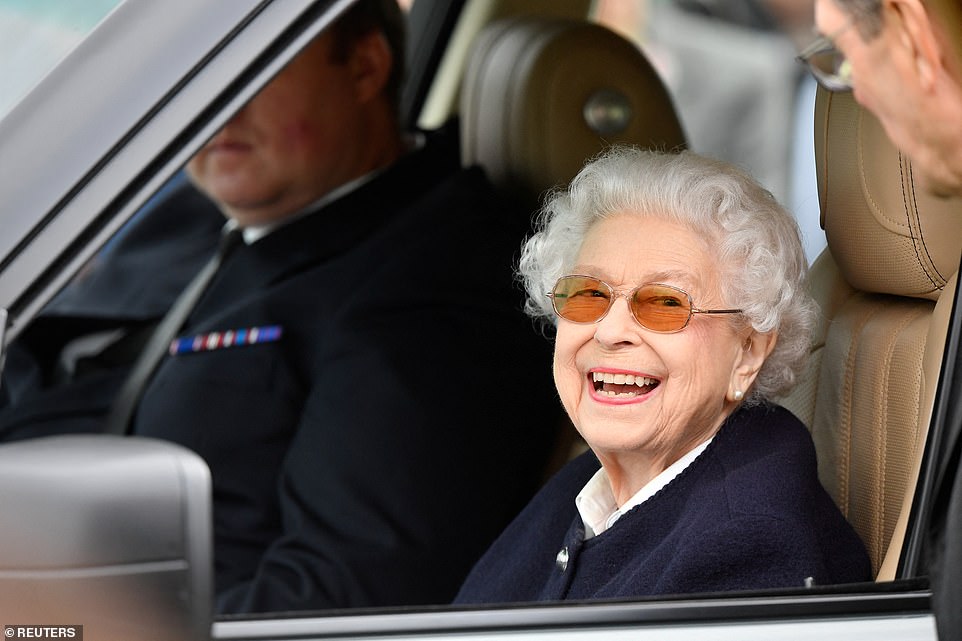 After missing the State Opening of Parliament, there had been speculation that she would not attend the annual event, which is one of the highlights of her year. Insiders said she was desperate to go, and was delighted to be there 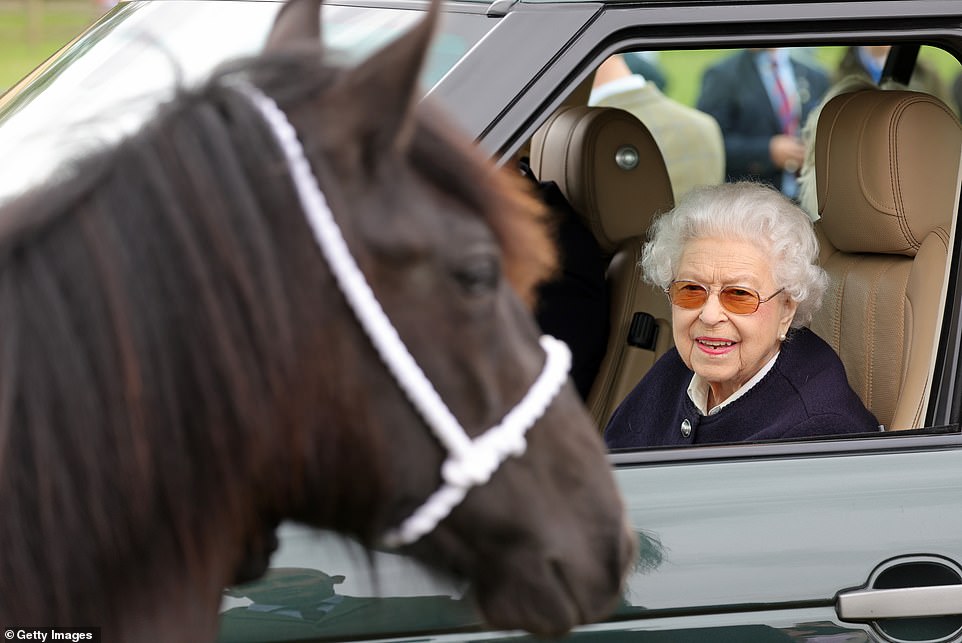 Horses are one of the Queen’s great loves, and her car was parked where she had a fantastic vantage point of the parade ring 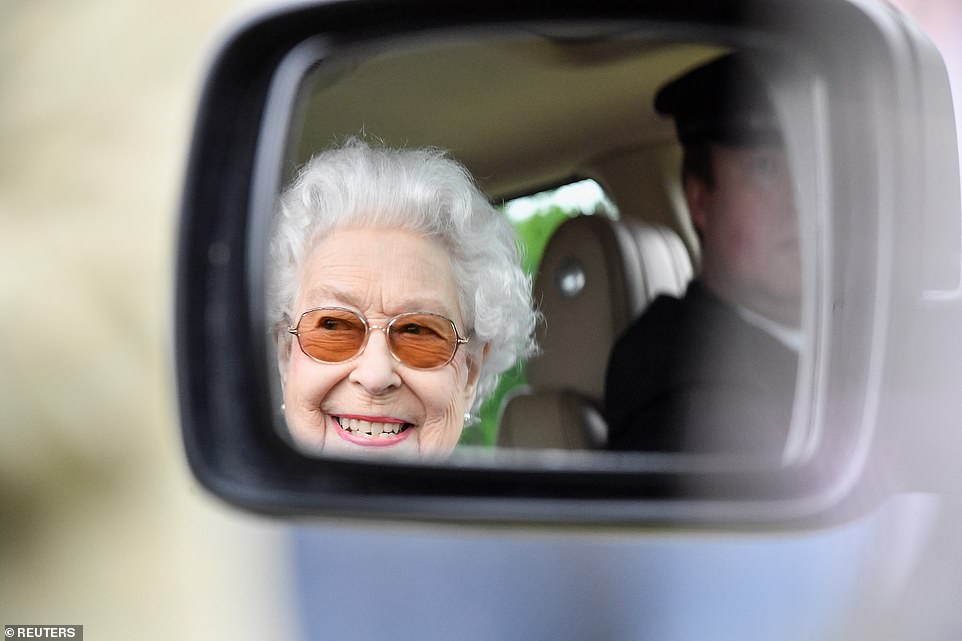 Britain’s Queen Elizabeth is reflected in the mirror of a car, as she watches horses competing on the second day of the Royal Windsor Horse Show and Platinum Jubilee Celebration in Windsor 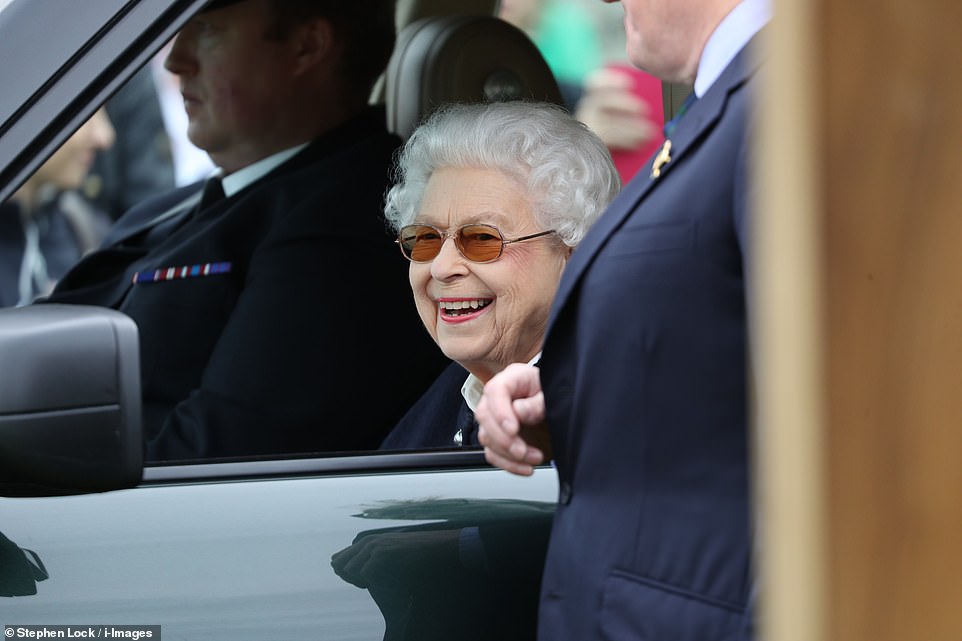 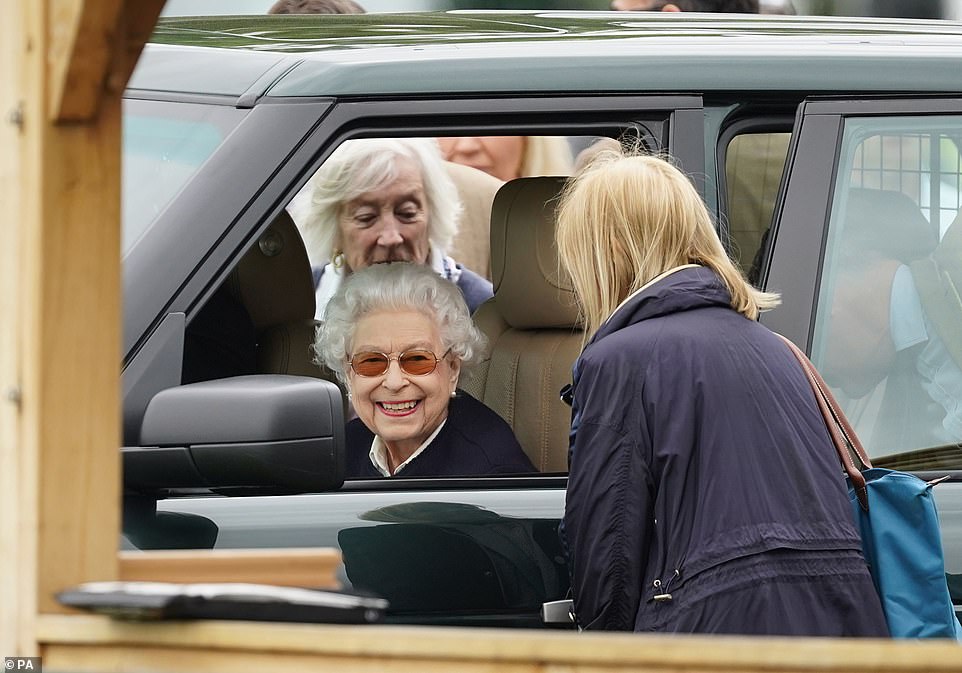 Well-wishers popped over to have a chat with the royal, who looked very happy to be passing the time of day with them at her favourite horse show 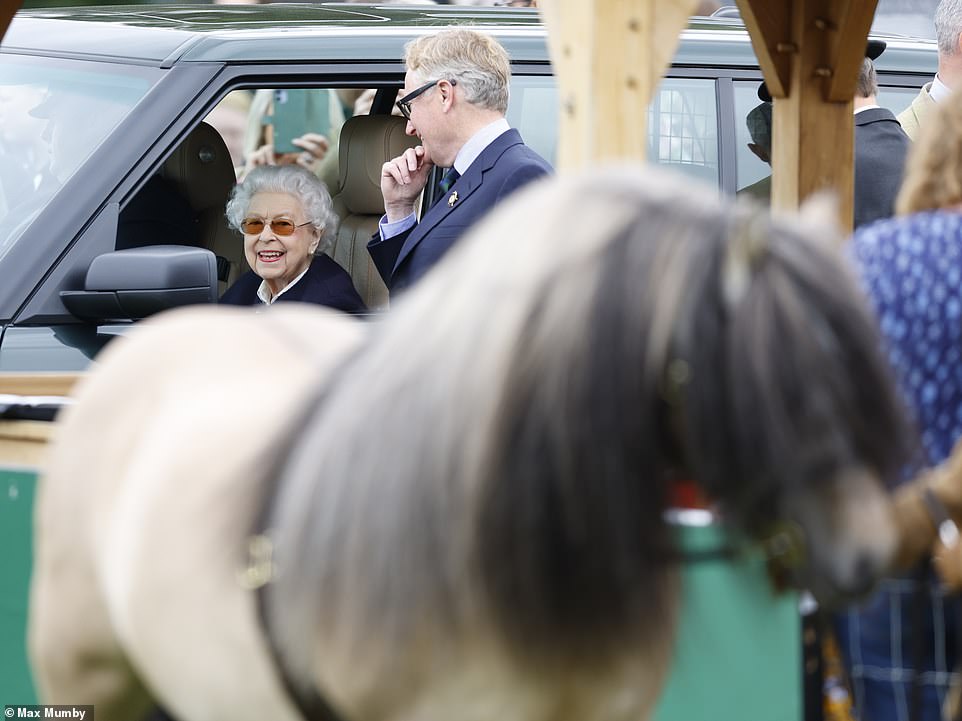 The Queen spoke to a member of the Royal Windsor Show team. The event was also beloved of her late husband Prince Philip 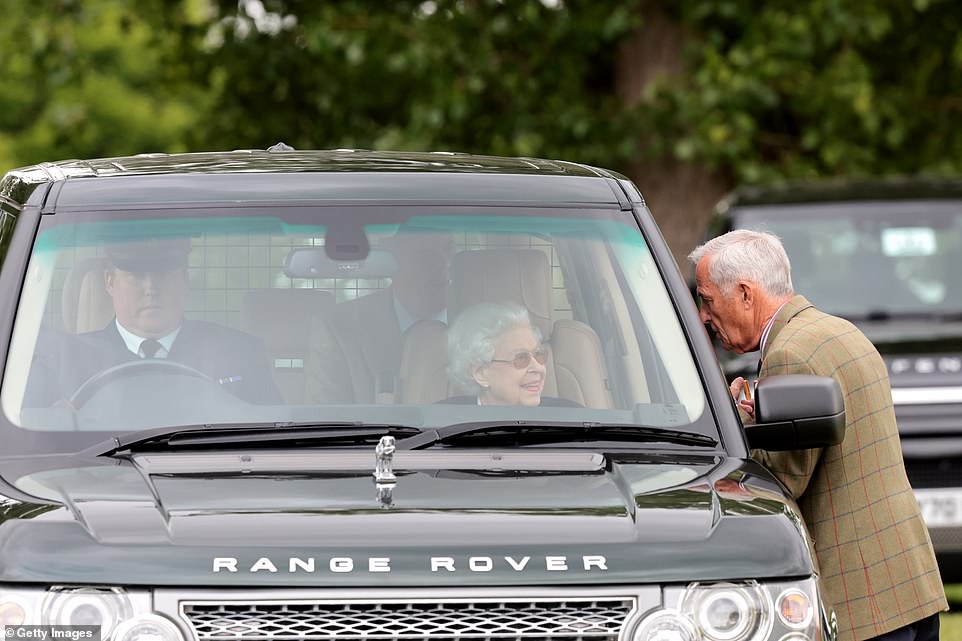 Her Majesty spoke to a three or four people through the window of her Range Rover this morning. The 4-day event will include the ‘Gallop Through History’ performance, which forms part of the official Platinum Jubilee celebrations

As the Range Rover pulled up near the parade ring, the Queen spoke to a small group, thought to be officials from the show, through the open car window.

She appeared relaxed, smiling and laughing as she chatted, while just a few feet away dozens of photographers tried to capture the moment.

Inside the parade ring, horses were put through their paces as relaxing classical music was played over the public address system.

Dozens of members of the public were also keen to have a memento of the occasion, holding up camera phones to record their glimpse of the Queen.

The monarch was last seen in public when she attended a service commemorating the life of her late husband, the Duke of Edinburgh, in March with senior royals and a congregation of hundreds.

She reached her Platinum Jubilee in February, overcame a bout of Covid after testing positive that month, and celebrated her 96th birthday on April 21 privately at her Sandringham estate.

Last October, she spent a night in hospital and over the following three months was under doctors’ orders to only conduct light duties so missed a number of prominent events.

The Queen has been using a walking stick in public since she attended a service marking the centenary of the Royal British Legion last October. 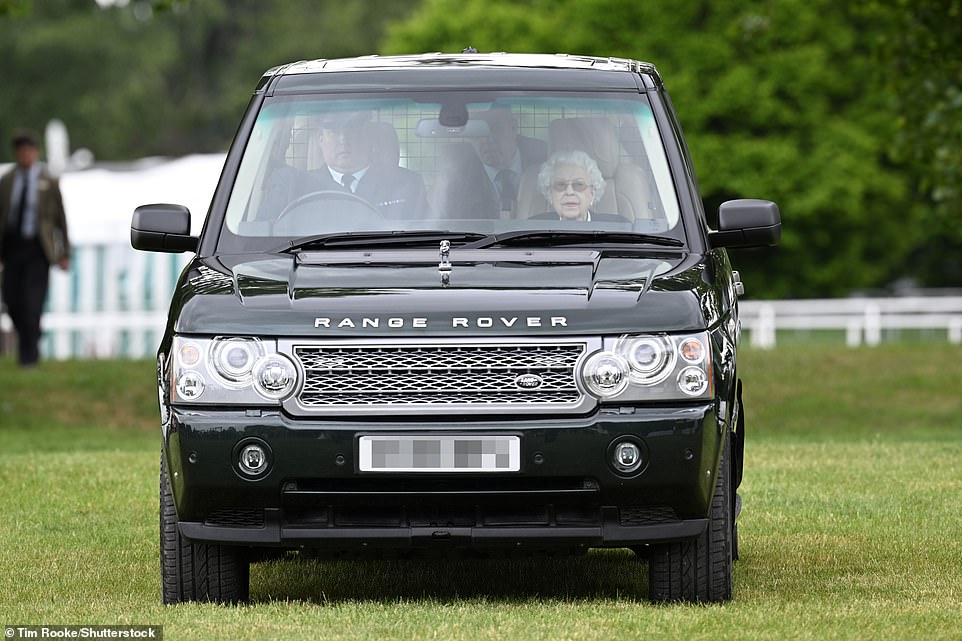 The 96-year-old was driven on to the showground in a Range Rover, parked next to the parade ring 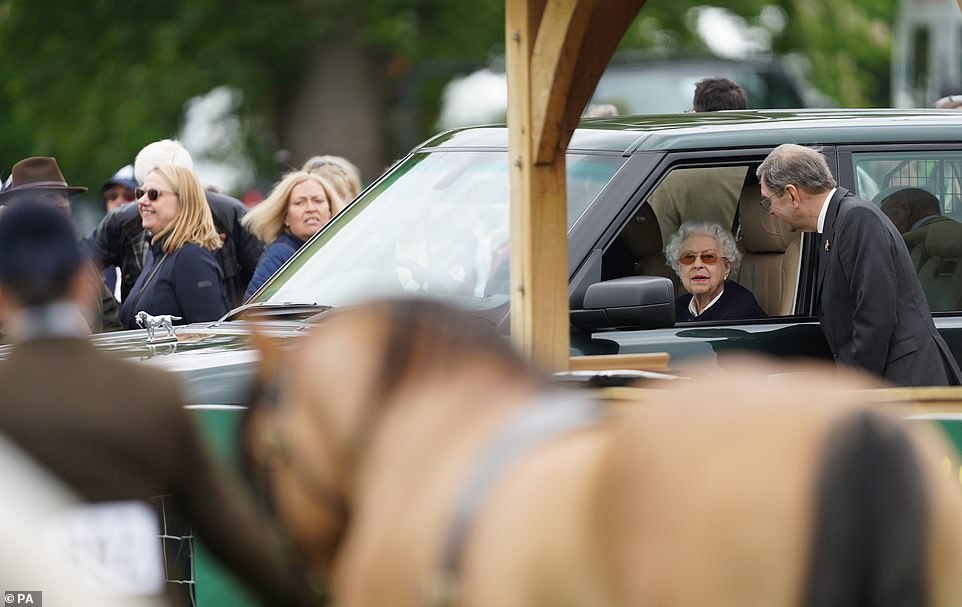 The crowds were delighted to see her sat in the front passenger seat of the vehicle, casually dressed in a white blouse and a blue cardigan-style top and wearing sunglasses 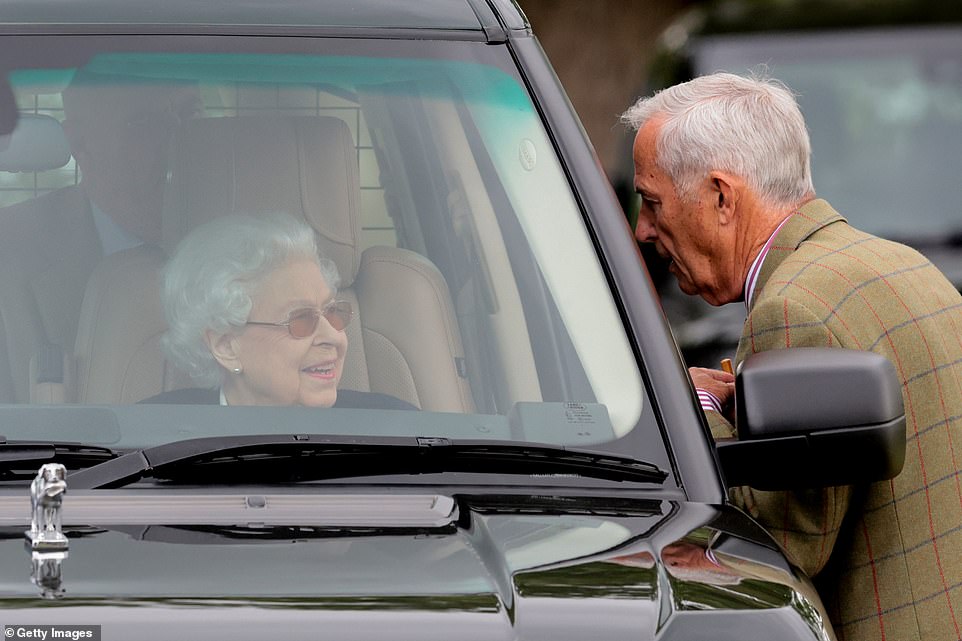 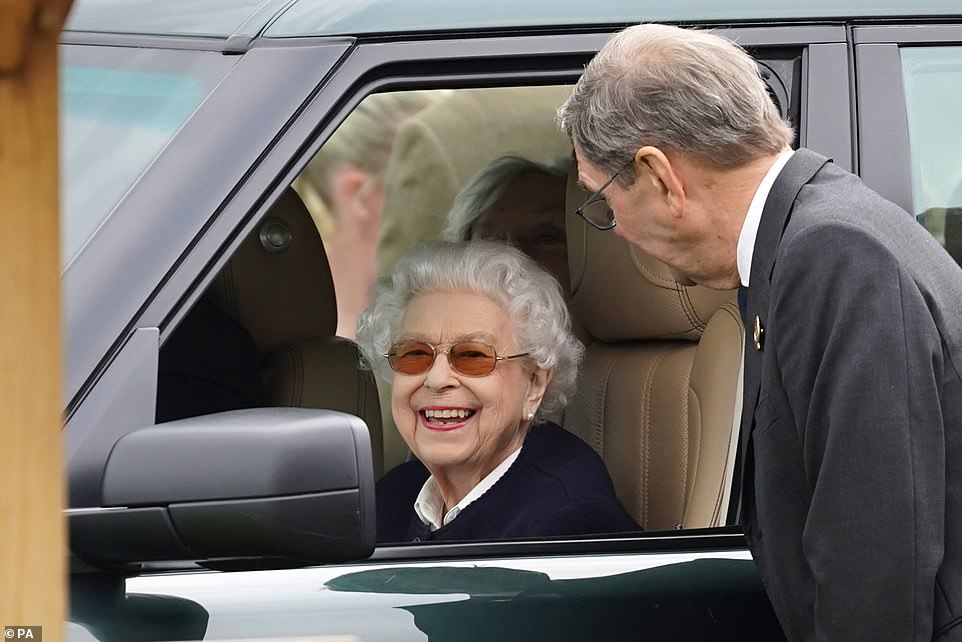 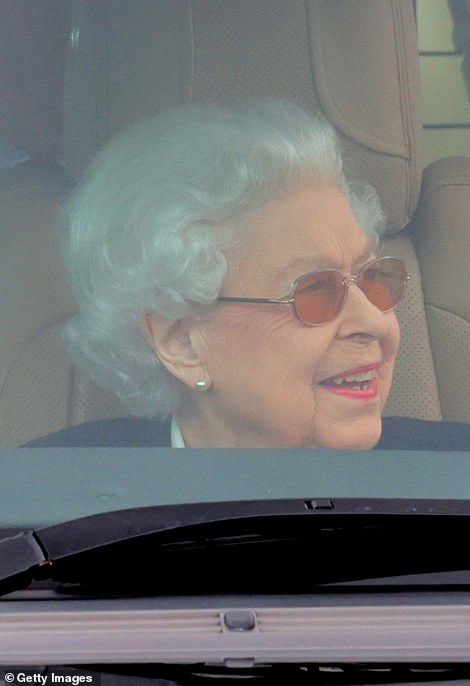 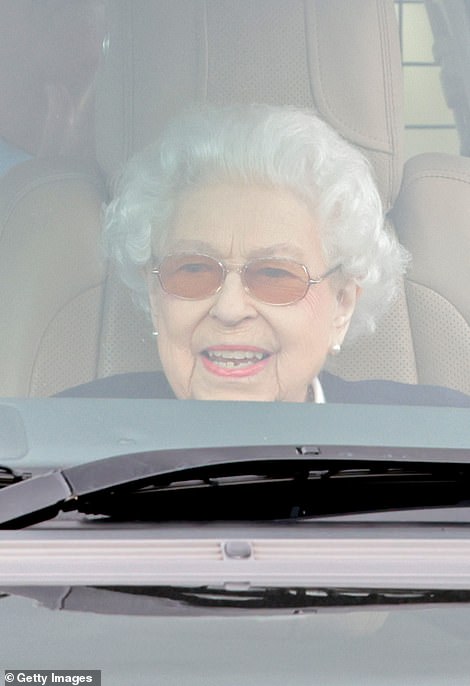 The show, which kicked off yesterday and will run until Sunday, is the Queen’s favourite event of the year but Princess Beatrice stepped in for Her Majesty in a ‘dress rehearsal’ for Sunday night’s festivities.

Beatrice was said to have ‘delighted to be asked to play the role of the Queen’ to make sure the event would go ‘without a hitch should Her Majesty wish to attend the Royal Windsor Horse Show in this way.’

Instead of attending the event, the Queen chose to visit her own horses. She has not missed the show in 79 years and this year’s event will see 14 of her horses competing.

The Queen had been set to be driven 500 yards from her Windsor Castle apartments to see her five-year-old gelding First Responder compete, but her appearance was suddenly called off minutes before the horse was due to take part.

She then privately visited her other horses entered into the contest at the Royal Mews at the castle, reports indicate.

It came as this week the Queen dramatically pulled out of the State Opening of Parliament for the first time in 59 years because of her increasing mobility issues. Prince Charles read her speech for the first time, accompanied by Prince William, who had never attended before.

And it has been revealed that Beatrice and Edo, as well as Princess Eugenie, 32, and her husband Jack Brooskbank, along with several other royals, won’t make an appearance on the balcony of Buckingham Palace during the Queen’s Jubilee celebrations.

The balcony appearance, which is often seen as the centrepiece of major royal occasions, including Trooping the Colour and weddings, usually sees the Queen’s extended family gather to watch a flypast and is a rare chance for fans to see the entire extended family together.

Following his ejection from public life, after settling a civil court case in America over allegations of sexual abuse against Virginia Giuffre (which he vehemently denies), it was inconceivable that Beatrice and Eugenie’s father Prince Andrew would be given a spot.

Despite earlier claims that the Queen offered Prince Harry and Meghan Markle a space on the platform, they too have been left off the list, although they quickly announced today that they will be in London for the celebrations with their two children.

However, in paring the list down to just 16 people to avoid potential diplomatic pitfalls, the Queen has been forced to omit a number of well-liked family members including her much-loved grandchildren and their families.

Her cousins, including Prince Michael of Kent, and their families, with whom the Queen enjoys a warm relationship are also out in the cold, with a total of at least 34 royals absent from the balcony. 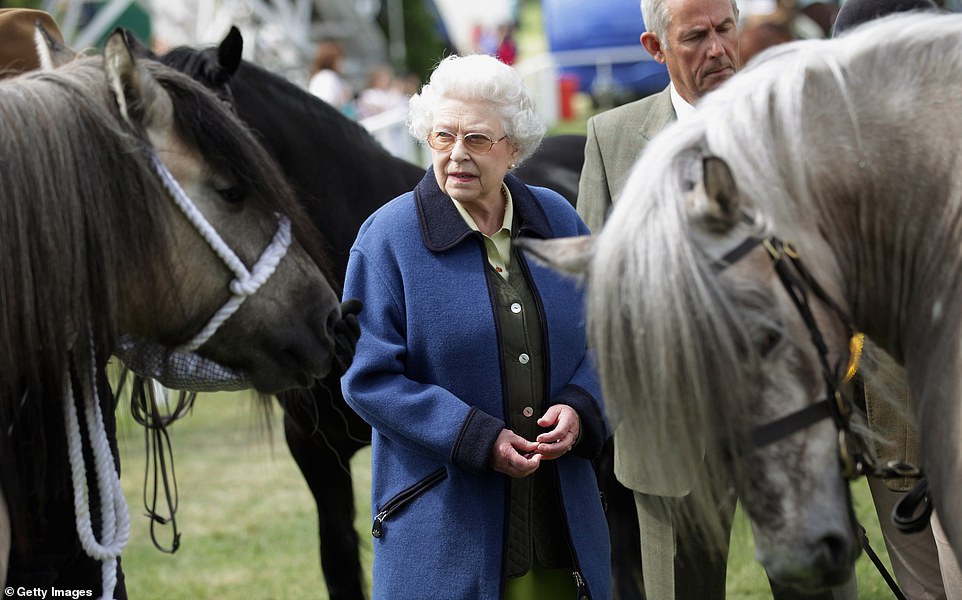 Princess Beatrice arrives during the charity preview night of A Gallop Through History Platinum Jubilee celebration at the Royal Windsor Horse Show at Windsor Castle. Picture date: Wednesday May 11 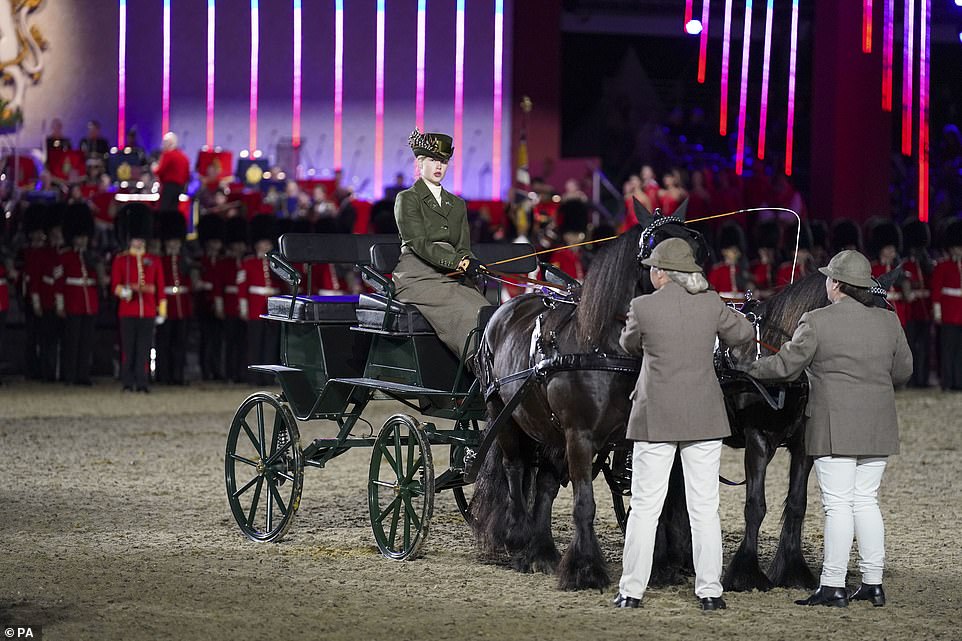 Lady Louise Windsor drives a carriage once belonging to the Duke of Edinburgh during the A Gallop Through History Platinum Jubilee celebration at the Royal Windsor Horse Show at Windsor Castle. Picture date: Thursday May 12

The Queen’s other adult grandchildren, Peter Philips and Zara Tindall have been excluded with their families, even though their mother Princess Anne and stepfather Sir Timothy Laurence will join the Queen.

In a formal statement about the decision, Buckingham Palace said: ‘After careful consideration, The Queen has decided this year’s traditional Trooping the Colour balcony appearance on Thursday 2nd June will be limited to Her Majesty and those Members of the Royal Family who are currently undertaking official public duties on behalf of The Queen.’

There are exceptions, however. Prince Anne’s husband Vice Admiral Sir Tim Laurence, who is not a working royal, and the Queen’s granchildren Lady Louise and James, Viscount Severn, and her great-grandchildren George, Charlotte and Louis are included.

The Palace spokesman added: ‘The Cambridge and Wessex children are also expected to appear as is Sir Tim Laurence, who the Queen is happy to attend as a frequent attendee and support for the Princess Royal on official engagements.’

The announcement follows reports that her Majesty herself may not appear on the balcony, due to the 96-year-old’s limited mobility.

It is believed that aides are working on a ‘plan B’, with an insider saying: ‘It could still happen but it is by no means guaranteed that we will see the Queen on the balcony during the Jubilee.’

While recent balcony appearances have been more focused on senior members of the Firm, normally, there are no restrictions on which family members are present for Trooping of the Colour, the Queen’s official birthday.

Litter collection problems in Eastleigh due to lack of staff

Blake Snell crossed his arm to open the doors

Ricky Martin ‘can move forward’ after lifting of restraining order against...