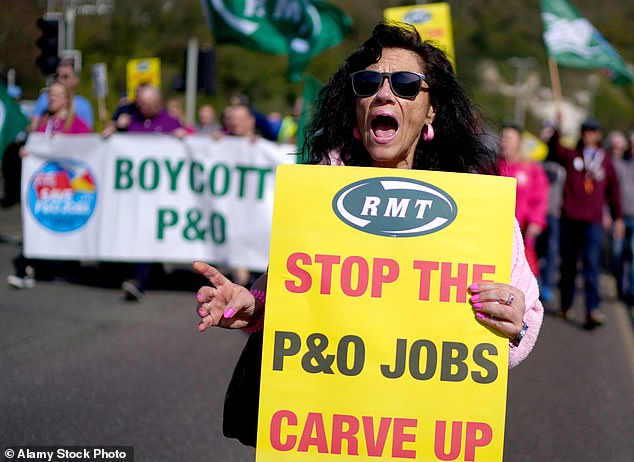 P&O Ferries owner to pay out £1bn in dividends since 2017: The revelation comes after almost 800 workers were made redundant in March, sparking a wave of anger

The Dubai-based owner of P&O Ferries has paid out £1bn in dividends since 2017, The Mail on Sunday reports.

The revelation follows the sudden sacking of nearly 800 P&O workers in March, sparking a wave of anger and political scrutiny.

Company filings for the firm’s owner, DP World, show the extent of its lucrative payouts.

Anger: The sacking of 800 P&O staff in March sparked a wave of protests

More recently, it announced a £233m jackpot for shareholders in the previous financial year. This is despite P&O Ferries boss Peter Hebblethwaite claiming just months ago that the decision to sack staff without notice was essential to “save the business”.

A tough decision to sack staff in March during an unscheduled video call led to P&O Ferries being hauled in for questioning by MPs.

It has also sparked criminal and civil investigations, although the National Insolvency Service recently said there was “no realistic prospect of a conviction”.

In March, the laid-off staff were replaced by cheaper agency workers to cut costs. The move helped DP World’s profits soar to a record £603m in the first half.

The RMT union said last week that “the exclusion of British seafarers from P&O Ferries was always intended to increase DP World’s profits”.

DP World is ultimately owned by the ruling royal family of Dubai, with Sultan Ahmed bin Sulaiman as its chairman and chief executive. Now the company is one of the largest port operators in the world. DP World bought P&O for £3.3bn in 2006 and soon sold it to a separate state-owned company. The British shipping giant, once described by Margaret Thatcher as “the very fabric of the empire”, was bought by DP World for £322m in 2019.

Frances O’Grady, general secretary of the Trade Union Congress, accused the Emirati firm of “getting away with behaving like corporate thugs”. She said: “While DP World lined the pockets of their shareholders, they showed complete disregard for hundreds of dedicated employees.”

A government spokesman said: “Not only have P&O Ferries acted callously, they have failed to maintain the high standards we expect from British business.”

The company had previously asked the government for £150m in aid in the event of the pandemic after demand for its ferries fell. But the request was rejected after it emerged that the company paid out a £270m dividend in 2020.

The company operates passenger routes between Dover and Calais, and between Hull and the Dutch port of Rotterdam, as well as services across the Irish Sea.

During a parliamentary hearing, P&O Ferries admitted it had broken the law by not announcing the redundancies, but said it was because no union would accept its new proposals. He also acknowledged that nearly 200 laid-off employees said they had lost property left on the ships on the day they were laid off.

Sultan Ahmed bin Sulaim drew criticism in May after praising Hebblethwaite for the “amazing job” he had done.

DP World said this weekend: “Over the past ten years, DP World has invested almost £3 billion without receiving a penny of UK profit.

“In addition, DP World paid more than £300m to acquire P&O Ferries and has since covered all its losses.

“The decision taken by P&O Ferries was the only way to ensure the survival of the business.”