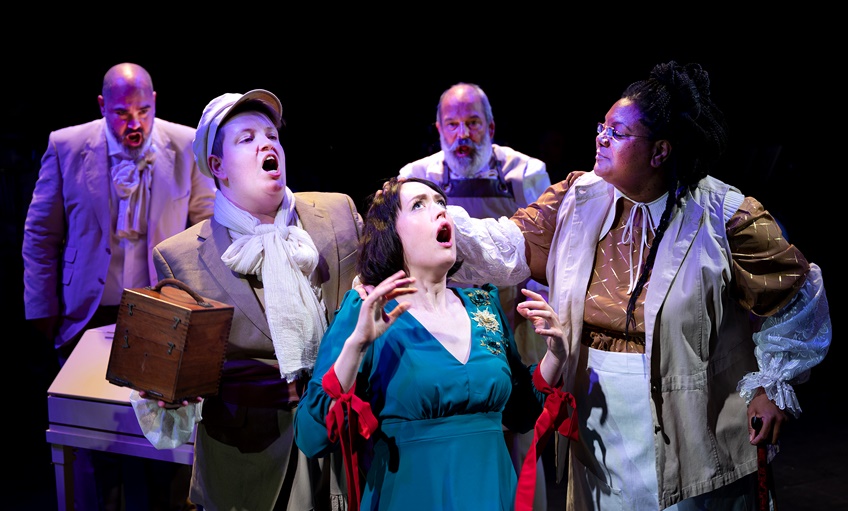 Fascinating story, super singing, intriguing music and subtle clear acting are the hallmarks of success in both musicals and operas. Telling the incredible story of the true musical genius of Maria Theresa von Paradis, known as the Blind Witch, Paradis files offers it all. In addition, this newly created chamber opera is a complex production of Graeae (in partnership with the BBC Concert Orchestra and Curve Theater), so along with clear, beautifully integrated audio descriptions and subtitles, BSL comes from two distinct translators, fully immersed in the emotions of the characters for which they subscribe.

Blind from an early age, Maria Theresa von Paradis was an extremely talented composer and virtuoso pianist, a huge star in the glittering salons of eighteenth-century Vienna and throughout Europe, where she reveled in exciting tours that gave her the freedom to have fun – including many entertainers. To the anger of her parents, she was also the mistress of one, more famous musician of the time – Herr Mozart. She later proudly founded a music school for blind students. However, despite her stunning success, despite her own belief that blindness was only part of who she was and not a embarrassment or a disadvantage, her parents belonged to a society that believed otherwise. Determined to “cure” her at all costs, they inflicted on her all the cruel, painful, traumatic, insane “treatments” that were pedaling at the time – pins, electric tongs, cutting, bleeding, freezing, tying – until she could withstand more. Not surprisingly, her relationship with her parents, especially with her mother, was particularly difficult and complicated. The fact that the obscene Salieri groped her piano teacher, and then in life gave birth to a stillborn, only added to her grief. ‘Ah, the pain!’ it is a frequent, painful refrain for both her and her mother.

With this little chamber opera lasting only seventy minutes, but it has so much to tell, everything is moving in a pretty old retrospective. For the most part this works well (although a two-act version with the ability to further develop and improve characters, relationships, and storylines would be a very exciting prospect, and a stronger finale will also give it a fuller fairness.)

Pretty great to show everyone in the picture before the story unfolds, on stage conductor Andrea Brown and joyful singers and five experienced musicians on stage presenting themselves, their roles and instruments. With humor and simple clarity, they describe the various elements of their costumes, appearance, color, flaws and gender orientation, as well as details of details and props. It’s a set that sits well on the Crucible stage, simple and appealing with its subtle Viennese touches – chandeliers, exquisite era chairs, gilded frames and a white backlit piano that serves as a pantomime keyboard, and a beautiful stage painted inside with its raised lid. However, the piano is sometimes too conspicuous, separating the singers when the interaction can be closer, especially if the signers are also involved.

Erolina Wallen’s eclectic score arouses her own interest and intrigue, from sharp to poignant, from hustle and bustle, planning and sharp jumping to beautiful harmony and Mozart’s tricks and prosperity, from piano exercises and Viennese whirlwinds to cabaret cabaret – with a smile. Special moments come from violin, accordion, double bass, drums, cymbals and piano, the music as a whole well reflects the drama of the story and emotion.

The singing is all wonderful and uplifting, several members of the cast have additional roles as doctors and in the chorus of gossip. Bethan Langford, herself with poor eyesight, is quite fond of the role of Teresa, her mezzo-soprano strong and enjoyable throughout the range. At the same time, bringing emotion to her beautiful voice and generating sympathy, Maureen Braithwaite as the alienated mother of Theresa, once stern and inflexible, who suddenly appears at the end of life to apologize to the enemy’s daughter and offer explanations if only opportunity. Brightly sonorous soprano Ella Taylor in the role of Gerda, the mediator, delivers joy, while Ben Tapa performs a lasting, imposing performance like the capricious, obscene Salieri, his rounded tenor also ringing to amuse the ear.

Excess deaths continue to rise despite a decrease in Covid deaths

MARKET REPORT: Asos falls out of favor after profit slips

Shocking cases of women wrongly refused a state pension at 66...