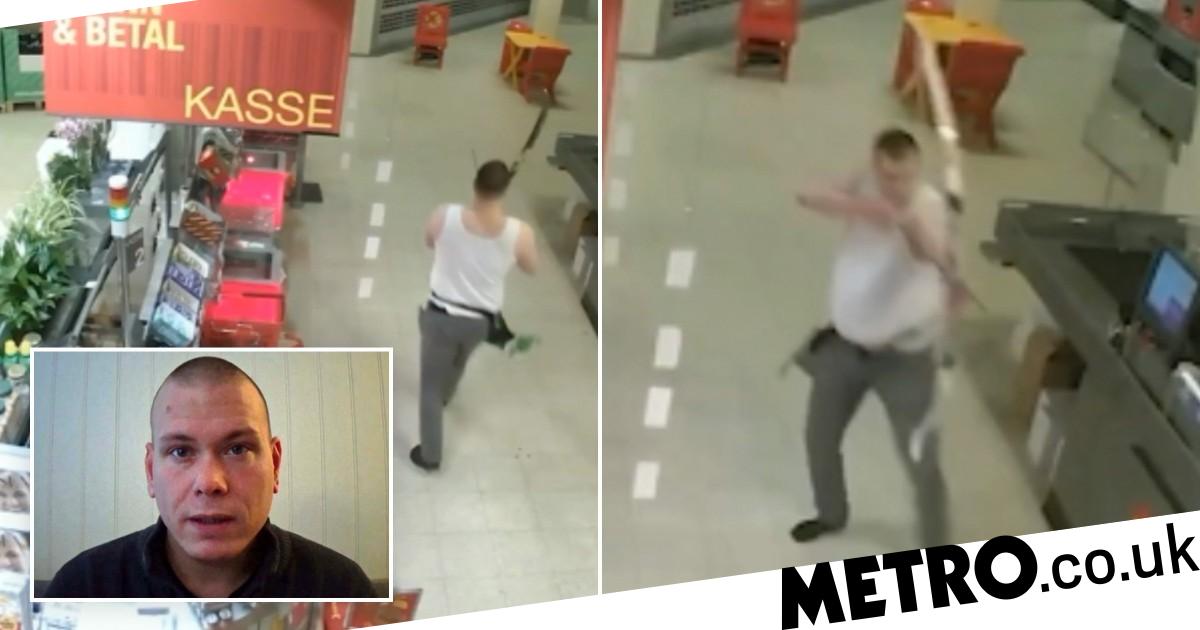 Published footage of a horrific moment when a man armed with a bow and arrow entered a Norwegian supermarket and started shooting at people.

Espen Andersen Braten yesterday began trial for the murder of five people and attempted murder of another 11 on October 13, 2021.

The 38-year-old man pleaded guilty to a judge when the court heard him walk the streets of Kongsberg with dozens of shots before attacking innocent shoppers at the Co-Op Extra supermarket.

The brother, who was listed by Norwegian security services as a person of concern, back in 2015, shot his victims before stabbing them with a hunting knife.

In all, he killed five people aged 52-78, including four women.

Video surveillance footage released by police when the trial began shows Braten entering a supermarket with a large knife strapped to his belt, armed with a bow and quiver of arrows.

In khaki pants and a white vest, he repeatedly charges a bow and shoots at his victims.

48-year-old Rigaberto Villaroel, a police officer, was with his family at the Co-Op Extra store when Braten started firing. He received a blow to the back but survived.

After firing shots at the supermarket, Bratten dropped his weapon and ran to Chittegathen, one of the most historic streets in Kongsberg.

There, he fatally stabbed Gunnar Savwe and Liv Borge, a 75-year-old couple in their apartment overlooking the Numedalslogen River, which flows through the city.

He then killed Gan Marit Madsen, a 78-year-old girl who walked with a frame, in her ground floor apartment at the end of the same street.

Neighbors said two men living in the apartment above Ms. Madsen were alarmed and rushed to the rescue but were unable to save her.

Hanna Englund, a 56-year-old ceramist, was also killed by Braten after he managed to enter her studio house in Heitegaten.

Andrea Meyer, 52, of Hamburg, was Braten’s latest victim and died in a pool of blood near Ms. Englun’s home.

Braton’s lawyers claim he is insane and should be sentenced to involuntary care in a psychiatric hospital, not sent to prison.

They said the court said he thought he would go blind and believed that killing people would lead to him being “born again”.

“It occurred to me that in order to be born again in a good place, I have to kill,” Braten told the court.

“I thought now I could go out and kill before I went blind.

“There is no danger of it happening again because now I know I will not go blind and that killing is wrong.

“I regret what I did and wish the people I killed were alive. I’m very sorry about that. “

Brathen, whom court documents and neighbors describe as an “unstable loner,” said he converted to Islam, but police deny it and say he is mentally ill.

PST – the Norwegian equivalent of MI5 – first contacted him in 2015, more than six years before his deadly attack.

In December 2017, two days after he posted a video on the Internet describing his conversion to Islam, for which he was informed by the authorities, police conducted an interview of “concern”.

At the time, the PST praised Braten: “he was not motivated by religion or ideology, but was seriously mentally ill.”

Childhood friends reportedly told police that Braten had mental health problems as a teenager and then broke away from society.

Cost of living : How can the UK government help reduce...

The EU has agreed a directive that will force Apple to...

How Liz Truss deals with severe economic challenges will determine her...