Newsheadlinesuk.com
Home Business Motoring on a budget: The right cars for the cost of living... 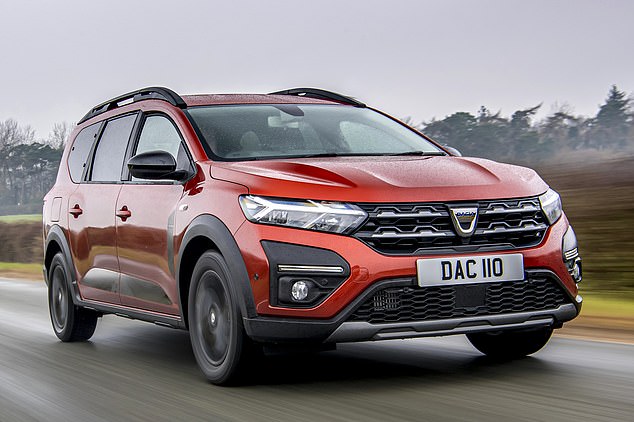 How to survive the deepening cost of living crisis is occupying the minds of millions.

As energy bills and food costs soar, and with inflation predicted to hit 10 per cent, families are looking at ways to stay afloat by cutting back on non-essential spending.

How to survive the deepening cost of living crisis is occupying the minds of millions. As energy bills and food costs soar, and with inflation predicted to hit 10 per cent, families are looking at ways to stay afloat by cutting back on non-essential spending. 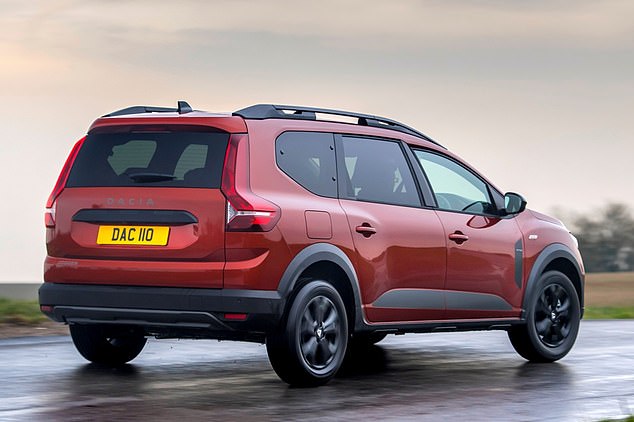 At just over 4.5 m, the Jogger is the longest model in the Dacia range with innovative modular roof rails and split-folding seats with nearly 60 possible configurations

After paying for a roof over your head, the second biggest financial outgoing for most people is their motor car.

For the vast majority, this is an essential part of their busy lives getting them and their families to work, school, the shops.

Keeping motoring costs down is, therefore, vitally important despite rocketing fuel prices at the pumps.

Changing your car right now is a challenge.

The supply of new vehicles is constrained by a perfect storm of issues which has in turn increased demand for second-hand cars, whose prices have also soared.

There are still new and used cars for tight budgets out there, though even here prices are rising as discounts disappear and finance deals become more expensive. 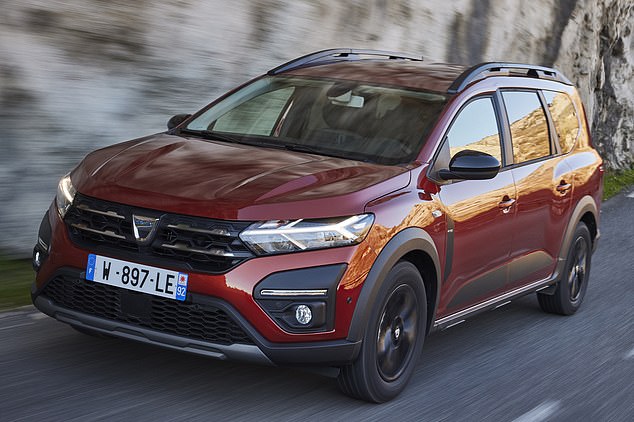 Hikes: Dacia originally priced the Jogger from £14,995 when it launched in March, but manufacturing costs have gone up and the base-level Essential has increased to £16,645 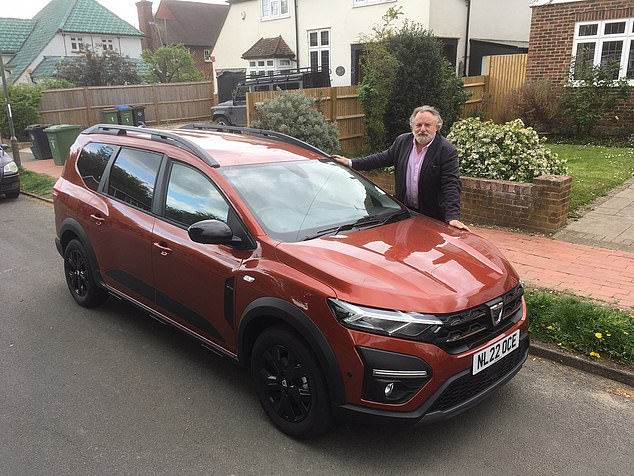 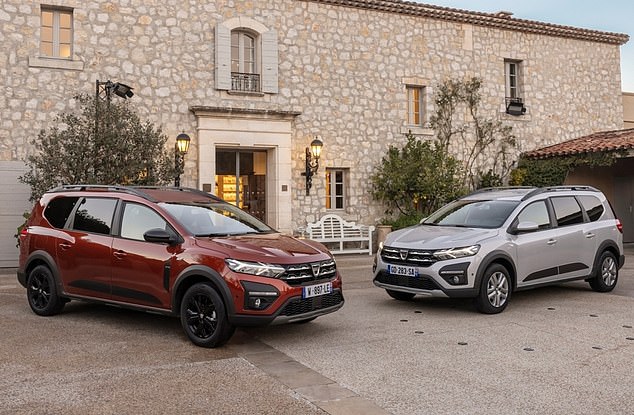 All versions are equipped with air conditioning, cruise control and rear parking sensors

The bad news is that prices here too have increased, most recently on May 6.

Dacia blamed the rising cost of raw materials, citing steel up 80 per cent and plastics up 20 per cent. It’s affecting all manufacturers.

Consumer magazine WhatCar? says new car prices generally shot-up by 6.6 per cent to an average £42,054 as the ‘price crunch’ takes hold, but said Dacia’s increases were nearer 10.1 per cent. Nevertheless, the Jogger remains a smart package with three full rows of flexible seats in a good-looking car that is simple and comfortable to drive. 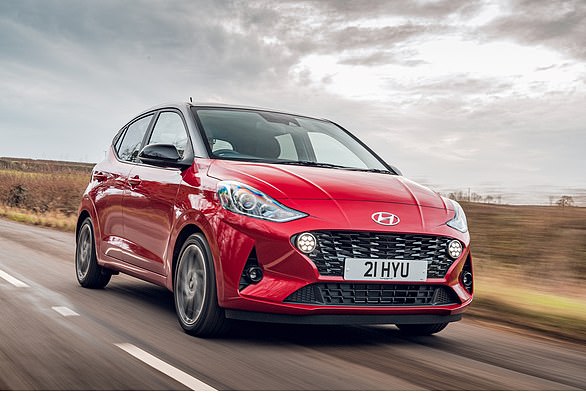 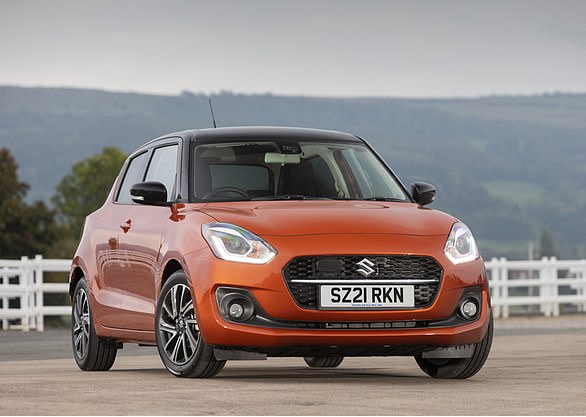 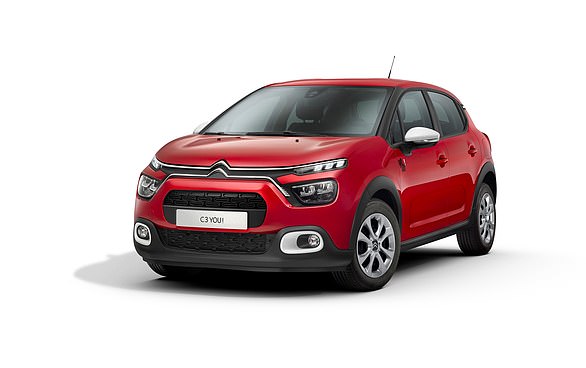 Citroen C3 You! Packed with kit and priced from £12,995 on the road, the C3 You! is the most affordable mainstream Citroen, although the Elixir Red premium metallic paint here is £695 extra 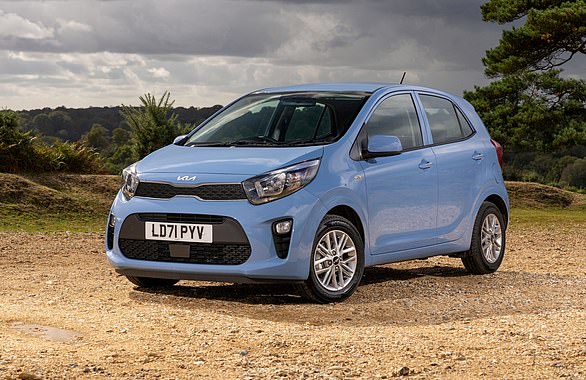 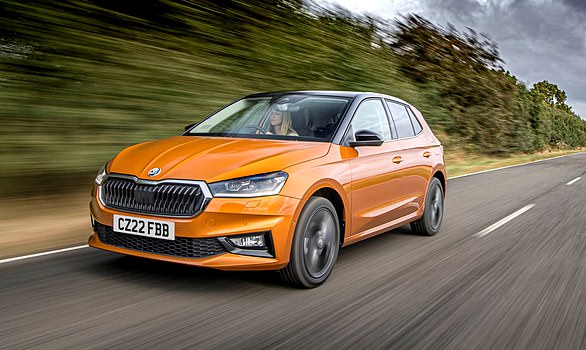 Skoda Fabia: The cheapest Skoda now to order is the Fabia Comfort SE priced at £17,800, though if quick you might bag from stock the last of the limited Fabia Hatch S from £15,910

This handy 110 hp engine keeps the SUV jogging along at a steady pace — accelerating from rest to 62 mph in a stately 11.2 seconds up to a top speed of 114 mph. It’s far from boy-racer territory but drives well and is perfectly acceptable for a busy family.

But a big bonus is fuel economy of 49 mpg. CO2 emissions are 132g/km. Dacia’s first hybrid option joins the range next year.

The car is a practical proposition with room for seven adults.

At just over 4.5 m, it’s the longest model in the Dacia range with innovative modular roof rails and split-folding seats with nearly 60 possible configurations and up to 2,085 litres of cargo space.

There are fold-down tray tables (on my Extreme SE) and cup holders for the second-row seats while those in the third row have their own armrests and tilt-opening windows.

Put the rear seats down and you’ve got a huge estate. Add to that 23 litres of cubby hole storage space spread throughout the cabin, including a 7-litre glove box, front and rear door pockets capable of holding a 1-litre bottle, a 1.3-litre lidded storage bin within the centre console and six cup-holders.

I’m not the only one impressed. WhatCar? noted that the Jogger will be ‘a winner with cost-conscious families after a no-nonsense MPV’.Autocar hailed it for ‘superb versatility, outstanding value and so likeable with it’.

It’s not perfect however. Although it did well enough on physical safety, crash test experts at Euro NCAP marked the Jogger down because it is not fitted with Isofix or a safety belt warning light for the removable third row of seats, which weigh just 10kg.

That’s because under Euro NCAP rules, a car can score only as highly as its lowest mark. Also, the test itself was on its sibling Sandero — not the actual Jogger itself. 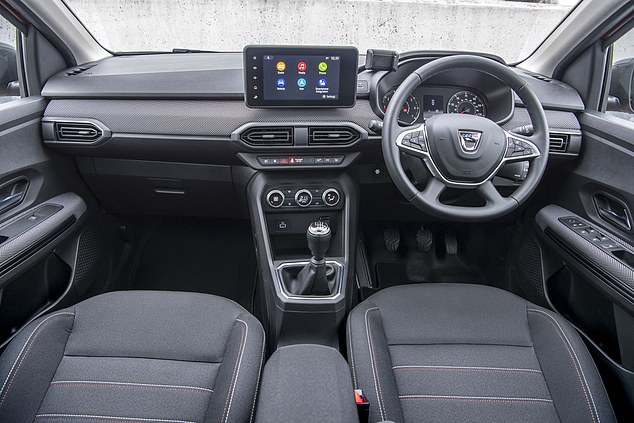 The Jogger has 23 litres of cubby hole storage space, including a 7-litre glove box, front and rear door pockets, a 1.3-litre lidded storage bin within the centre console and six cup-holders 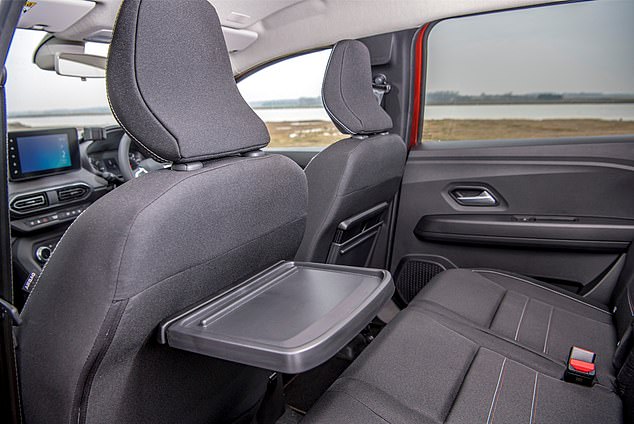 Comfort: There are fold-down tray tables (on my Extreme SE) and cup holders for the second-row seats while those in the third row have their own armrests and tilt-opening windows 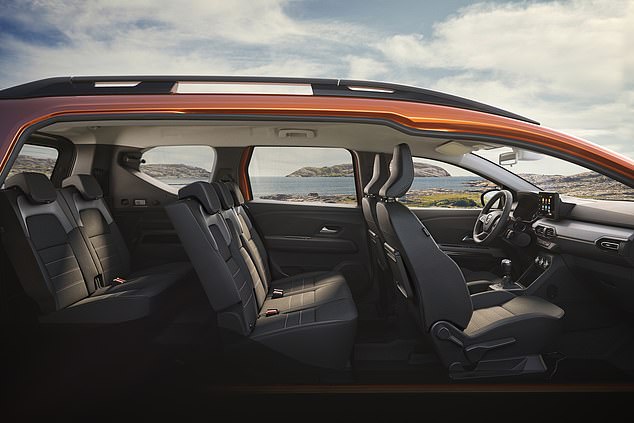 Dacia blamed the rising prices on the cost of raw materials, citing steel up 80% and plastics up 20%, something that is affecting all manufacturers 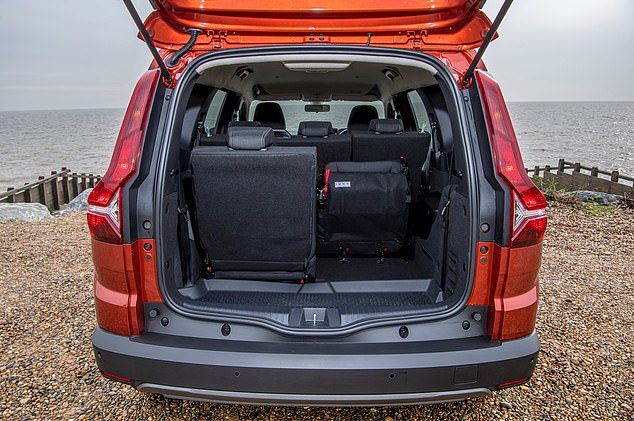 Roomy: The Jogger boasts split-folding seats with nearly 60 possible configurations and up to 2,085 litres of cargo space

Will it fit in my garage? New Dacia Jogger

Fuel efficiency: Up to 49.6mpg

Boot volume: 212 litres to 2085 litres (depending on seat configuration)

Loading length: 1100mm to 2000mm (depending on seat configuration)

Dacia’s Sandero was until this month the undisputed cheapest new car on the market costing from £7,995, but that too has seen an increase to £12,295, exacerbated by the previously lowest Access trim level being discontinued because of low demand.

Customers preferred to pay a bit more to get more spec, said Dacia.

Prices for the sportier and more rugged Dacia Stepway have risen from £11,495 to £13,795 — with a choice of 1.0-litre three-cylinder petrol engines in either turbo or LPG. So those who ordered before the rises are quids in.

Other value-for-money buys include models from Kia, Citroen, Hyundai, Skoda, MG, and SEAT, but the best bargains are to be had on models just about to be replaced.

And marques like Skoda and Kia, which were once seen as budget brands, have over time become increasingly upmarket and pricier, just as Japanese brands Honda, Nissan and Toyota did decades ago.

There are other ways to save. Few people pay for a new car outright by cash these days, and most look to a finance deal.

After a down payment, the monthly terms of a few hundred pounds a month can look tempting.

But always do your homework and look at the whole-life cost of the deal on offer. And haggle hard. All dealers have wriggle room.

Hybrids and plug-in hybrids (PHEVs) help boost fuel economy by integrating electric power with a conventional petrol engine, so are worth considering. 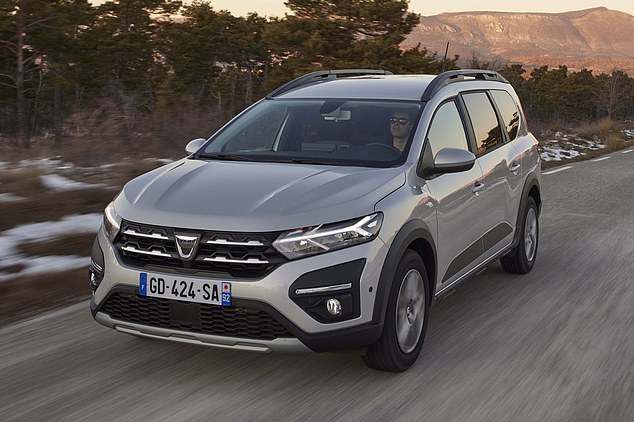 Frugal: The Jogger has an impressive fuel economy of 49 mpg. CO2 emissions are 132g/km and Dacia’s first hybrid option joins the range next year 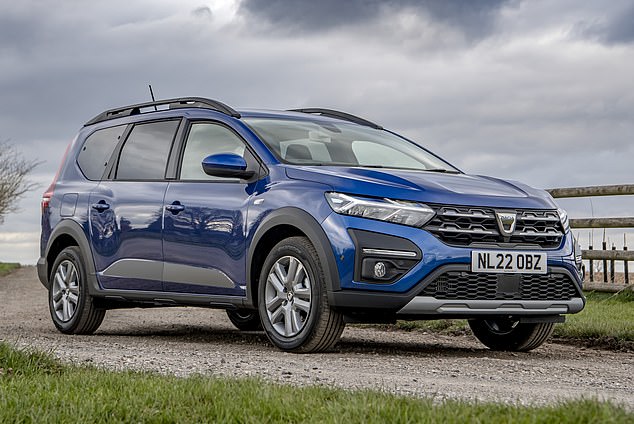 Ease off the gas

Shop around to get your insurance premium down. Sadly insurance firms too often penalise loyalty by pushing up the premiums of long-standing customers, while offering the cheapest deals to prospective new customers to hook them in.

So play the game yourself. Don’t be shy about shopping around and playing one deal off against another. But always check the small print.

And watch that right foot. If you ease off the accelerator and drive more smoothly you can boost your fuel efficiency and keep those pump bills down.

Demand up for second-hand cars

As demand continues to exceed supply — and used prices soar — second-hand car sales increased by 5.1 per cent for the first quarter of this year to more than 1.77 million, according to the latest figures from the Society of Motor Manufacturers and Traders.

Sales of used electric cars doubled to 14,586. But traditional petrol and diesel vehicles still account for 96.2 per cent of the used market. 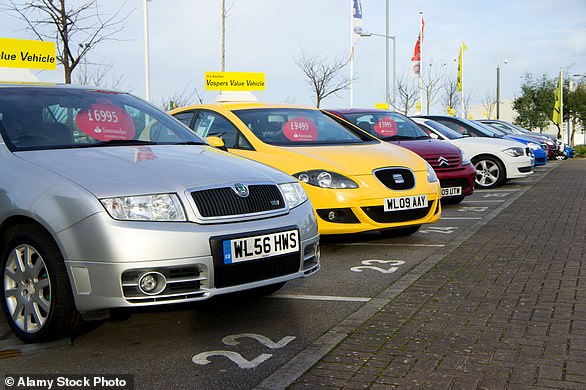 Perfect storm: Used prices have soared with second-hand car sales up by 5.1% for the first quarter of this year

Plug-in hybrid vehicles accounted for 3.6 per cent of the market share — up from 1.6 per cent in the first quarter of last year.

Mini, dual purpose and supermini segments saw the largest growth, up 13.5 per cent, 12.3 per cent and 9.1 per cent respectively.

‘The real pinch point is for cars aged less than three years old, as there are at least two million fewer available compared to pre-pandemic levels.

This is due to the massive recent shortfall in new car sales — caused by the double whammy of forecourt closures and the global shortage of semiconductors.’

Most popular used car colour was black, with one in five cars (338,418 in total) changing hands painted in the that shade. It was followed by blue, silver, grey, white, red, green, orange, yellow and beige.

At the other end of the spectrum, just 1,184 pink cars were bought by second owners.

SAVE MONEY ON MOTORING

Next Fifteen has bet on M&C

“It’s Madness”: Suppliers Stop Covid Aid for the Uninsured as a...

Eliminating the fear of investing in cryptocurrency