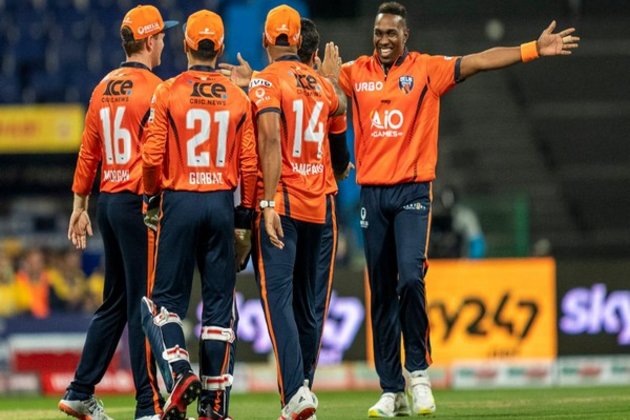 Abu Dhabi [UAE]Sep 20 (ANI): Cricket’s fastest format is set to return with a bang this winter, with Dwayne Bravo, Kieran Pollard, Chris Lynn and David Miller among the T10 players selected by Abu Dhabi this year.

Bravo have been retained by the Delhi Bulls, while Lynn is at the helm of the Abu Dhabi team’s host city franchise. Bangla Tigers have picked Shakib Al Hasan, Dasun Shanaka leads the Chennai Braves and two-time winners Northern Warriors have retained Waninda Hasaranga. As for the defending champions Deccan Gladiators, they have retained star captain Andre Russell as their signature player ahead of their trophy defence. This year will also see the introduction of two new American franchises; New York Strikers and Morrisville SAMP Army. The New York Strikers selected Pollard as their signature player, while the Morrisville SAMP Army took Miller. Pollard, one of the most destructive and successful players in the history of white-ball cricket, will play alongside England’s 2019 ODI World Cup-winning captain Eoin Morgan of New York Strikers, who clearly has his top two picks in mind. In the Morrisville SAMP Army, recent IPL winner with Gujarat Titans, Miller is joined by compatriot – and quick off the mark – Henrich Northier as a platinum player with Moeen Ali and Shimran Hetmyer also signed. Shaji Ul Mulk, Chairman of T10 Sports Management, said: “I am delighted to welcome the Morrisville Samp Army and New York Strikers from the USA to our T10 family in Abu Dhabi. Our aim – the league was to make the Abu Dhabi T10 one of the great events in the international cricket calendar and to increase the number of viewers of our global broadcasts, which currently stand at 342 million. o new teams from the Americas, we continue to build on the success of the tournament as cricket’s fastest format continues to grow rapidly across the continents.

“We are proud to have assembled this star-studded line-up of players as Iconic and Platinum players this season and look forward to seeing the fans in the stadium for the 6th tournament.” Sagar Khanna, Owner, New York Strikers: “I’m very excited to be a part of the T10 journey and I’m really looking forward to this season and beyond. New York Strikers will do their best to meet the passion of Abu Dhabi T10. We hope that the team can go all the way and that they will have the full support of management in this endeavour. Abu Dhabi T10 is one of the best events in the cricket calendar and I am sure that New York Strikers will add more colors to the tournament. “”This is the beginning of a new and exciting chapter for Samp Army. The Abu Dhabi T10 is a unique and highly competitive competition that brings together elite players from around the world. This gives us a great opportunity to compete against some of the best players in the world and test ourselves as we head into the season, and hopefully we’ll make our fans proud at home in the US,” added Ritesh Patel, owner of Morrisville Samp Army, according to the release.

Season 6 of the Abu Dhabi T10 kicks off at the magnificent Zayed Cricket Stadium on November 23 and the final will be held on the UAE National Day on December 4. Along with the six teams that participated this way, two new teams from the USA joined the bandwagon with the New York Strikers and the Morrisville SAMP Army, making it an eight-team extravaganza where they will compete in a 10-Overs side game.

The original Icon and Platinum Player picks and holdover picks resulted in eight franchises with significantly more stars. All eight squads will be finalized at the official player draft for the 2022 tournament, which will take place on September 26 in Abu Dhabi, where each team will have to select one new international player and three players from the UAE.

In the format of the tournament, each of the eight teams will play each other in a round-robin format. The top four qualified teams will advance to the playoffs, which will include two qualifiers and one eliminator to determine the two finalists. (ANI)

An American soldier serving in Germany is the first case of...

Hailey Bieber in a plaid blazer dress with a plunging neckline...