Ciara put her bikini body front and center as she attended the Sports Illustrated Swimsuit Issue launch party after landing the 2022 cover.

The songstress, 36, was a sight to behold in a sizzling black mini dress with cut-outs showcasing her toned torso and long legs as she posed up a storm at the Hard Rock Hotel Time Square in New York on Thursday.

Ciara worked a wet hair look that was slicked back into an updo with a few loose tendrils cascading in front of her face.

Ready for swimsuit season! Ciara put her swimsuit body front and center as she attended the Sports Illustrated Swimsuit Issue launch party after landing the 2022 cover

She smoldered for the camera with an edgy shade of smoky eye shadow and a slick of clear lip gloss accenting her pout.

Ciara put on a fiery display as she posed up a storm in her sexy, all-black look.

The dress hugged every inch of her fabulous body while showing off a black bra and plenty of skin.

Taking the glam to a whole new level, she accessorized the look with glittering earrings, an array of bracelets, and of course her massive wedding rings from husband Russell Wilson.

If you’ve got it! The songstress was a sight to behold in a sizzling black mini dress with cut-outs showcasing her toned torso and long legs

Taking it to the next level! The Level Up hit-maker took the red carpet by storm 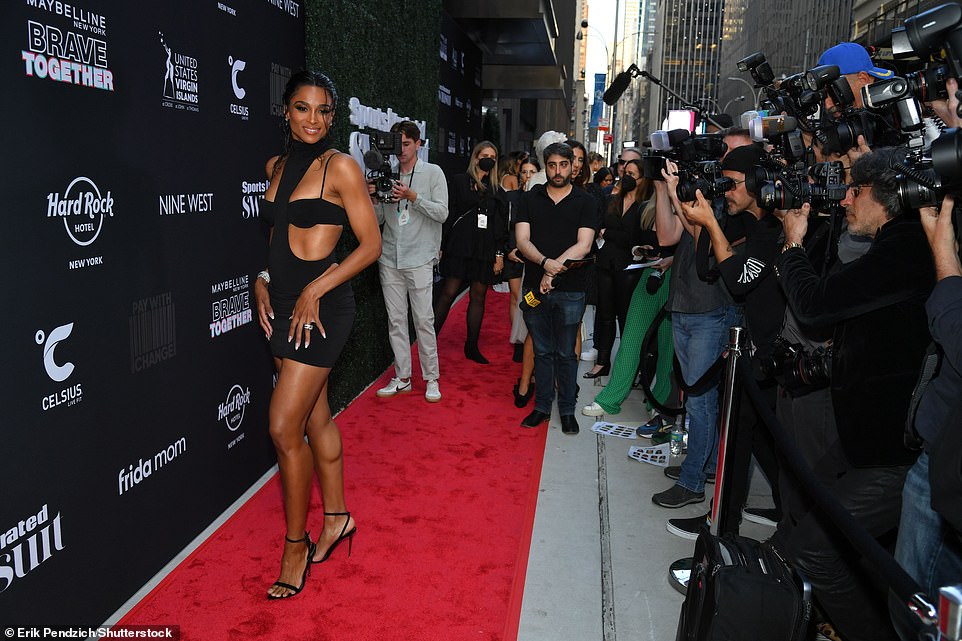 All eyes on her! Ciara soaked up the spotlight as she posed at the NYC bash 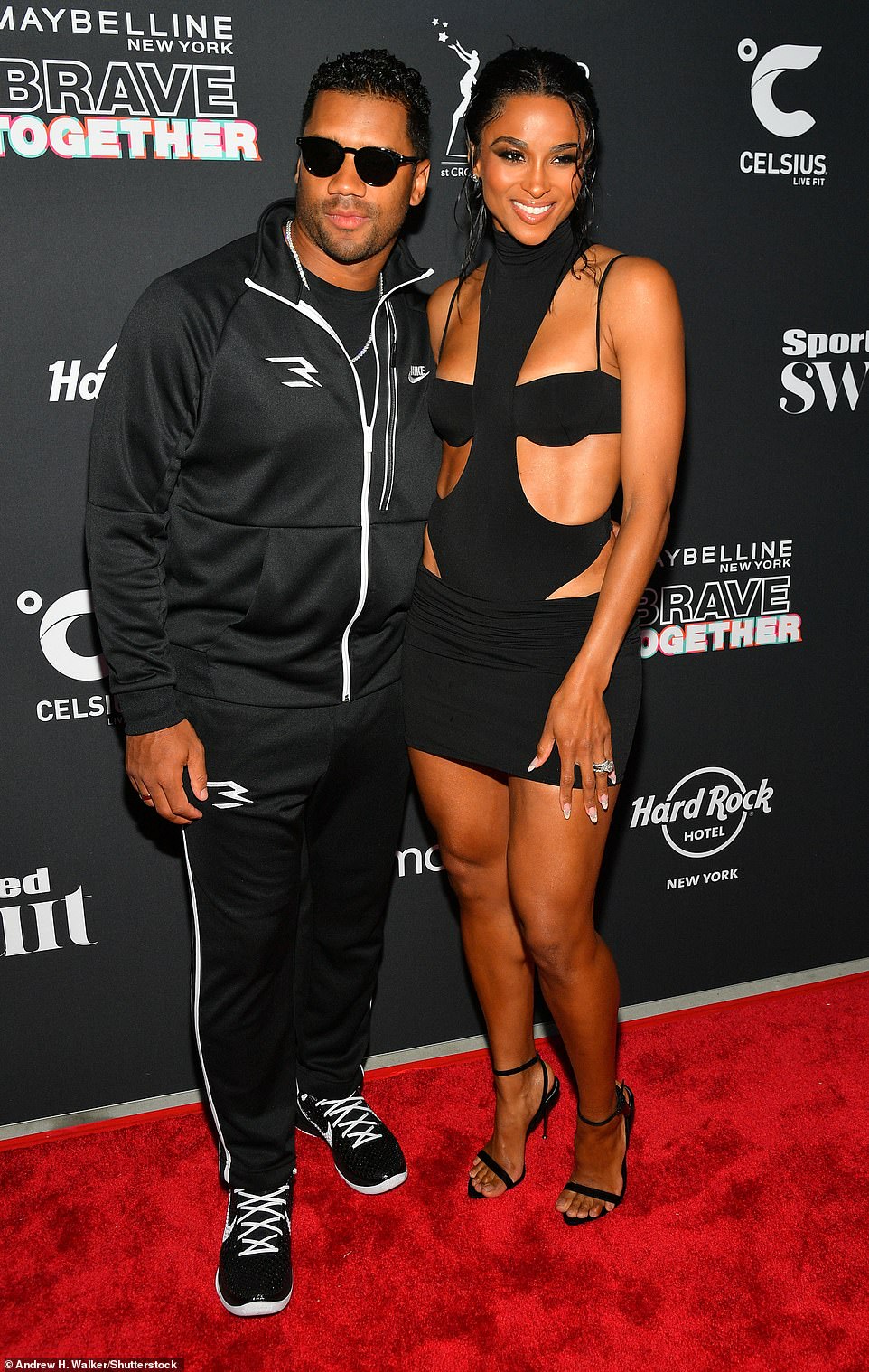 He’s a catch! The beauty was joined by her adoring husband, Denver Broncos quarterback Russell Wilson

Ciara is one of four women to have landed their very own Sports Illustrated covers – Kim Kardashian, Yumi Nu, and Elon Musk’s mother Maye Musk, 74, were the others appearing on the front of the coveted publication. 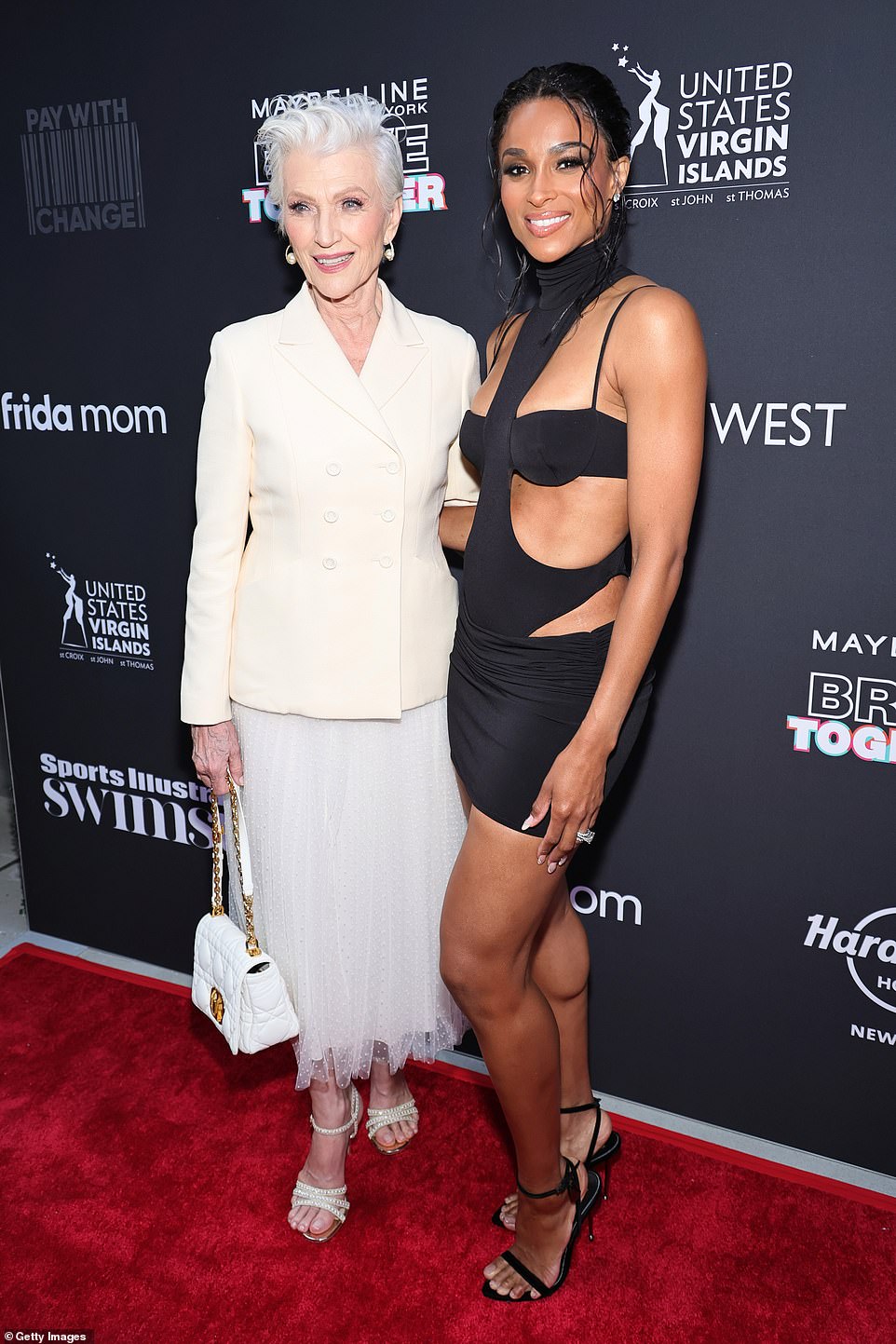 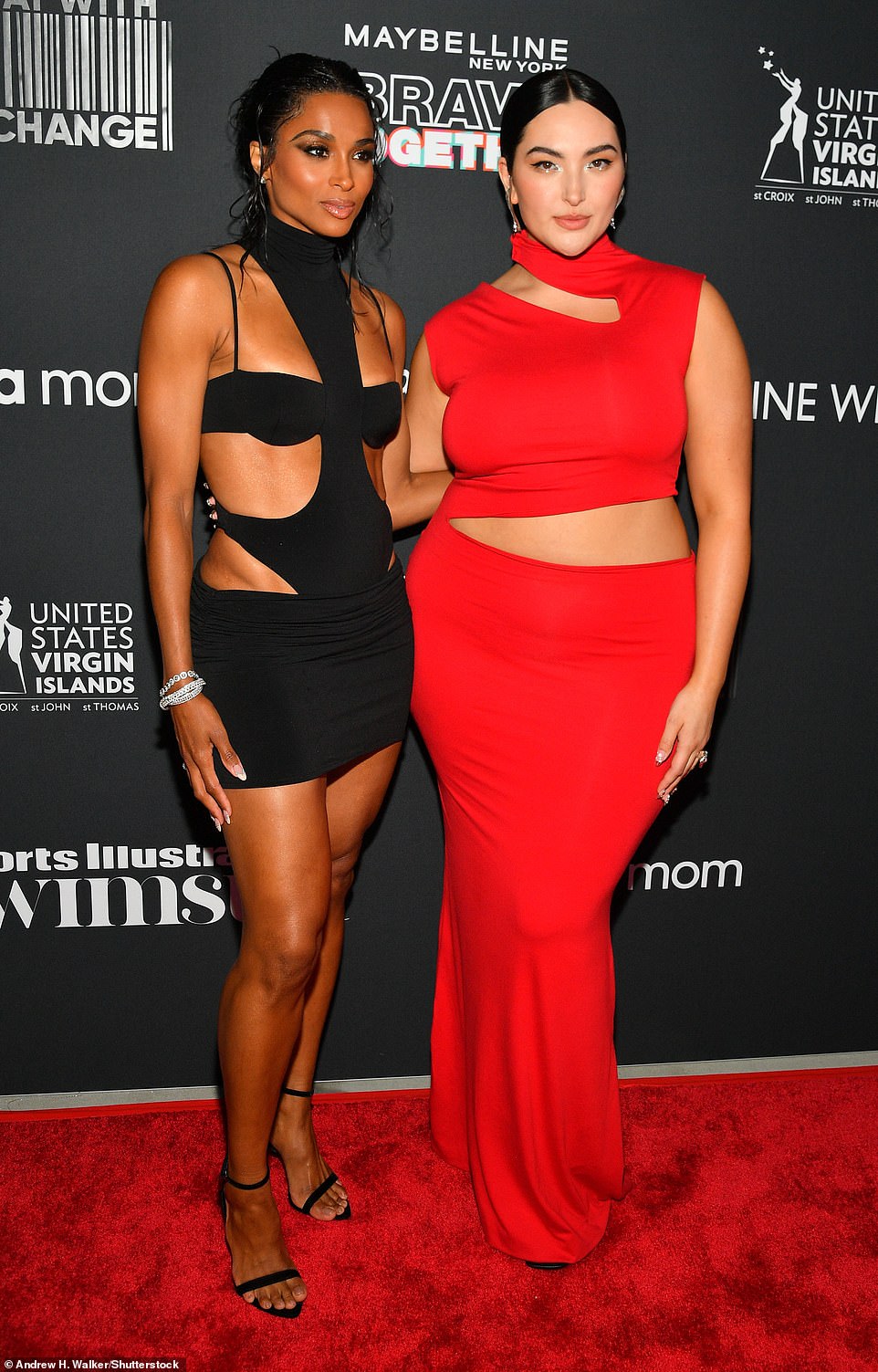 Simply stunning: The model captivated with her tresses slicked back and edgy silver earrings accessorizing the look

The beauty styled her raven locks back into a chic updo and accessorized the look with an edgy pair of silver earrings.

A slew of other SI models took the red carpet by storm in celebration of the latest issue, which officially hit newsstands today.

Heaven sent! Denise Austin’s daughter Katie Austin and Josephine Skriver, who both appear in the 2022 SI Swimsuit Issue, worked their magic in white

Kate Bock turned heads in a black crop top and jeans while Hailey Clauson stole the show in a fitted black dress with feathered wrist.

Brooks Nader looked simply sensational in an ultra-sexy black dress which put her cleavage on show.

Ciara, Kim, Yumi, and Maye were all photographed in separate locations for their SI shoot, with Kim in the Dominican Republic, Ciara in Barbados, Musk in Belize, and Nu in Montenegro.

‘The journey we’ve been on – to break out of the mold the world put us in – may sound familiar. It’s certainly familiar to the women we’ve chosen to be our cover models: Maye, Ciara, Yumi, Kim,’ MJ Day, editor in chief of SI Swimsuit, said in a statement.

All that glitters! Olivia Ponton worked her magic in a glittering sheer dress while Leyna Bloom showed some cleavage in a dazzling champagne-hued dress

Turning heads! Duckie Thot made a statement in a pink crushed velvet jumpsuit while Camille Kostek captivated in a bright blue dress

‘At course, Kim, no stranger to the world’s judgment, continues to live proudly, authentically and unapologetically through the noise.

‘Ciara has seen enormous success as a performer while simultaneously focusing on her passion for philanthropy and service. At 74, Maye continues to work every day to inspire those around her.

‘And in her first year of being in the spotlight, Yumi is coming into who she is and taking on the responsibility of what she stands for.’

1,2 Step! Ciara took the party to the next level as she performed at the bash 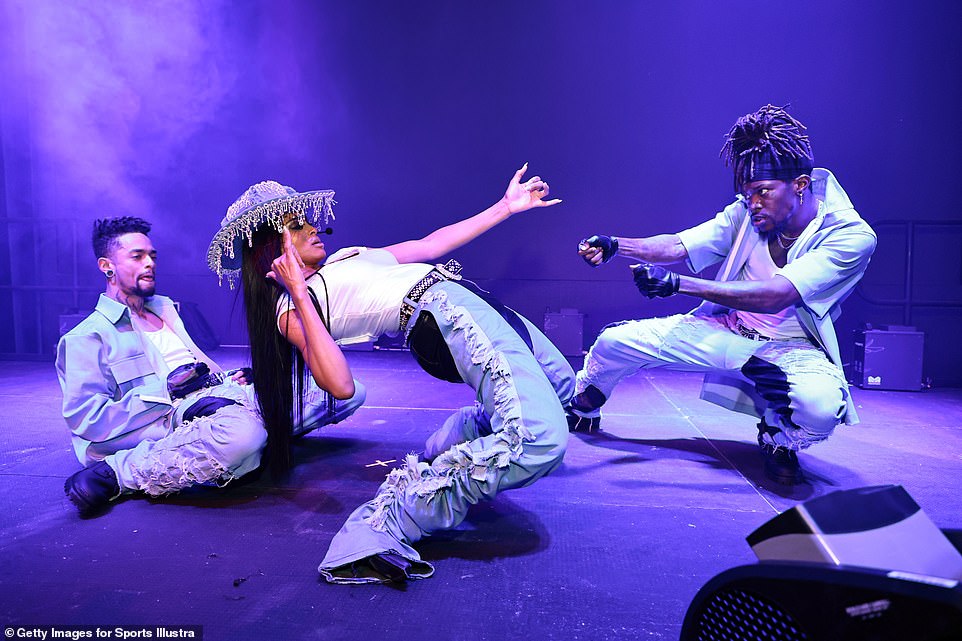 I like to move it! The songstress put her impressive dance moves on display 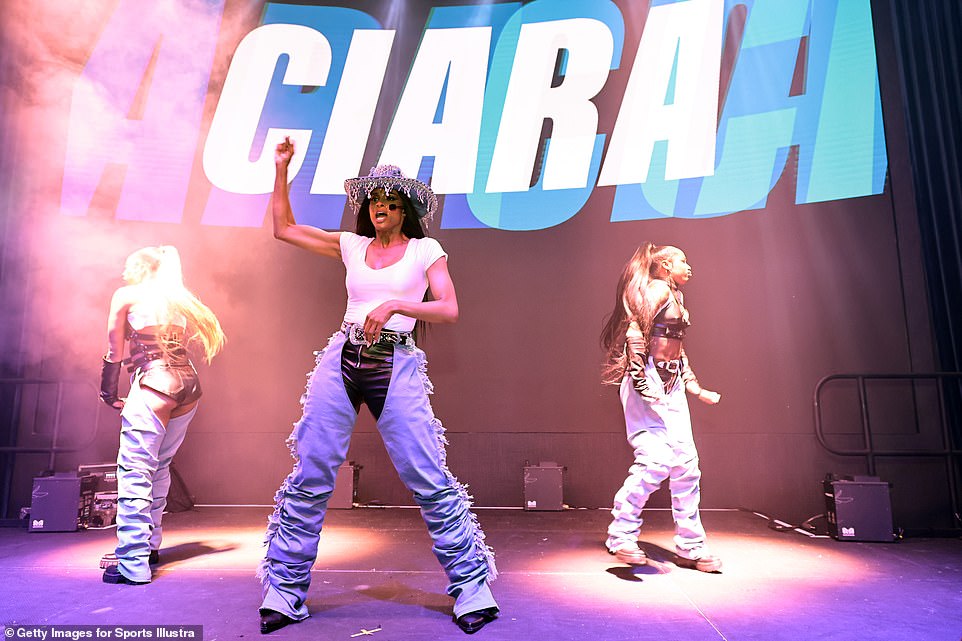 Giddy up! The beauty wore a cowboy hat and frayed jeans for her performance 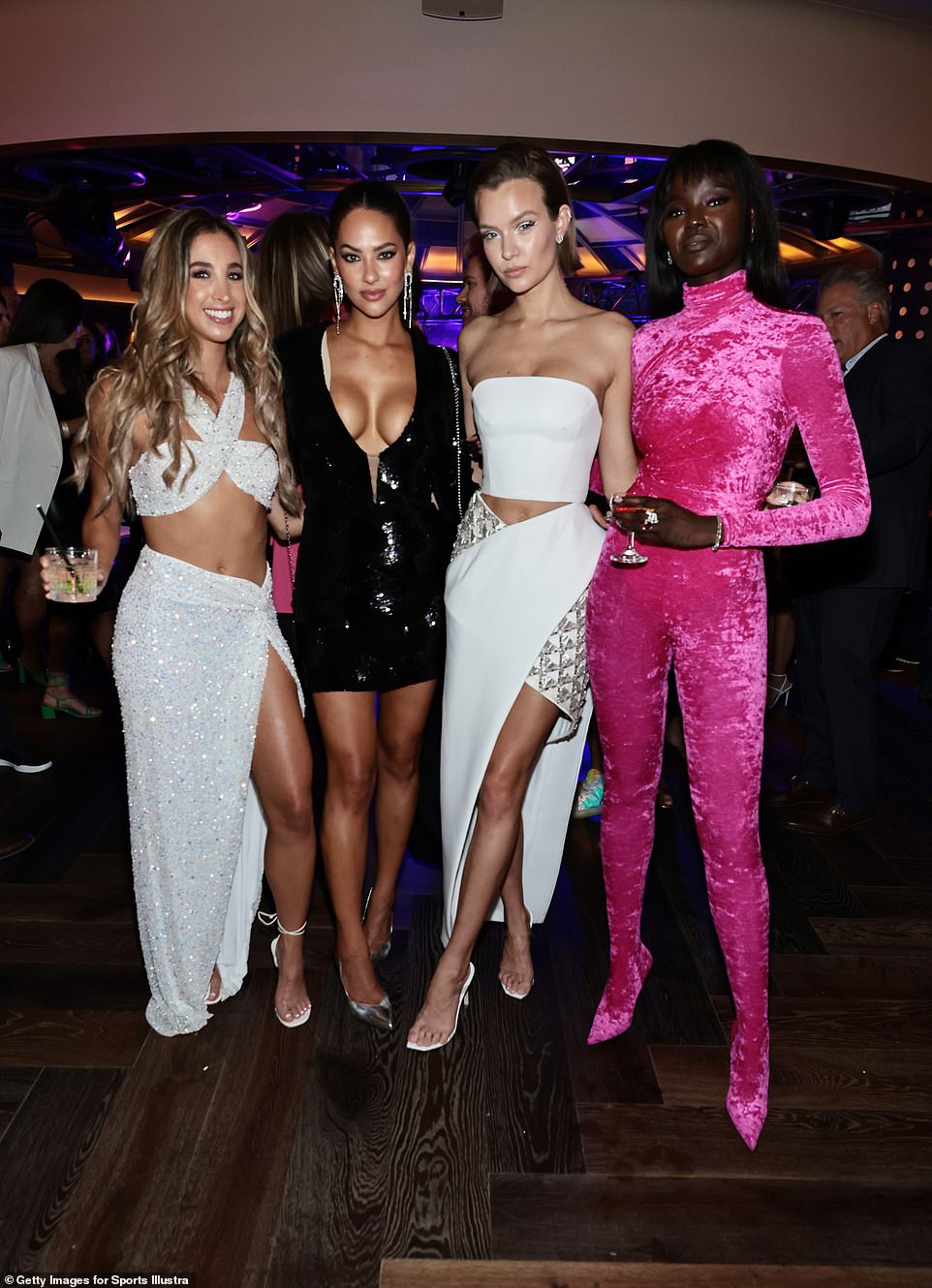 Party with the SI models! Photos captured the festivities inside the Hard Rock Hotel 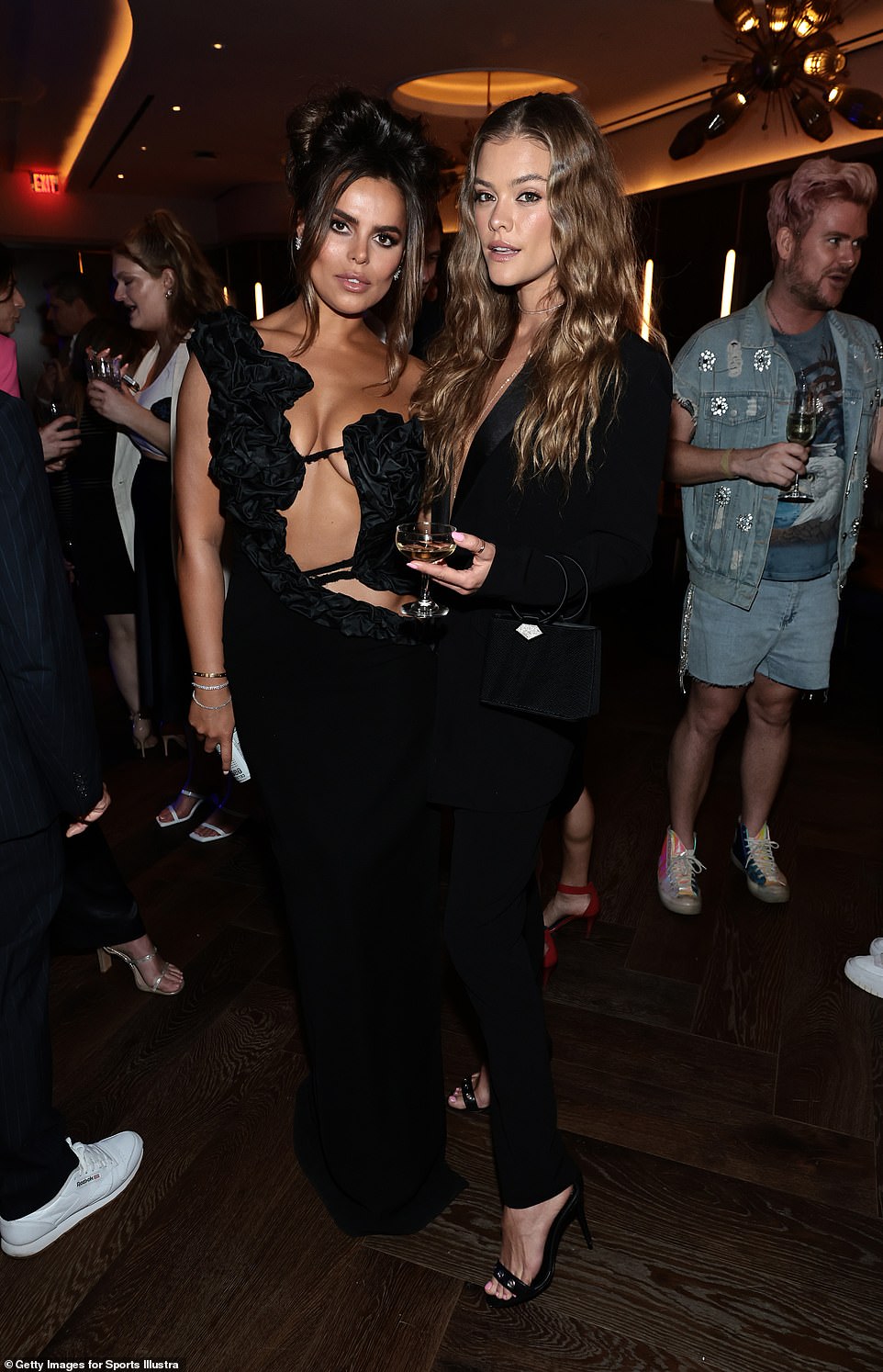 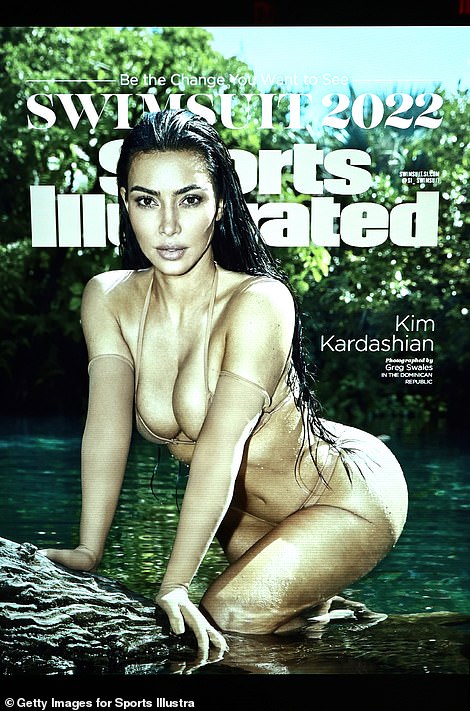 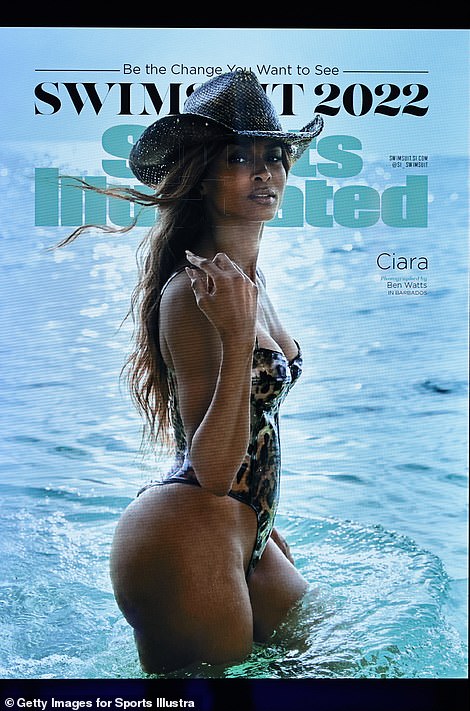 Showing off their assets! Kim and Ciara’s covers were displayed at the bash 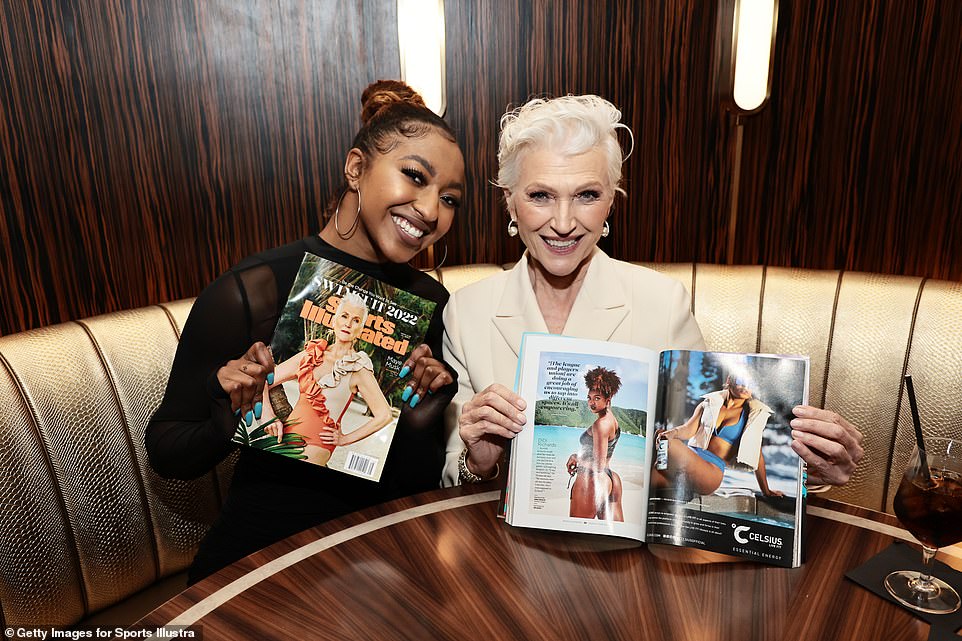 Check it out! Didi Richards and Maye proudly showed one another off on the magazine 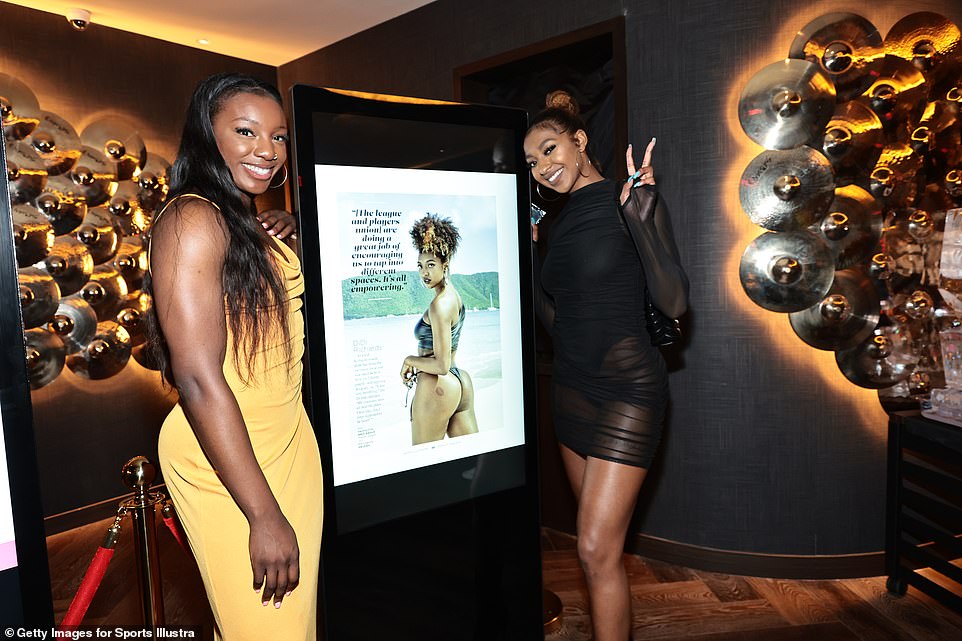 Ready for her close-up! Didi posed by a display of her SI shoot with Michaela Onyenwere 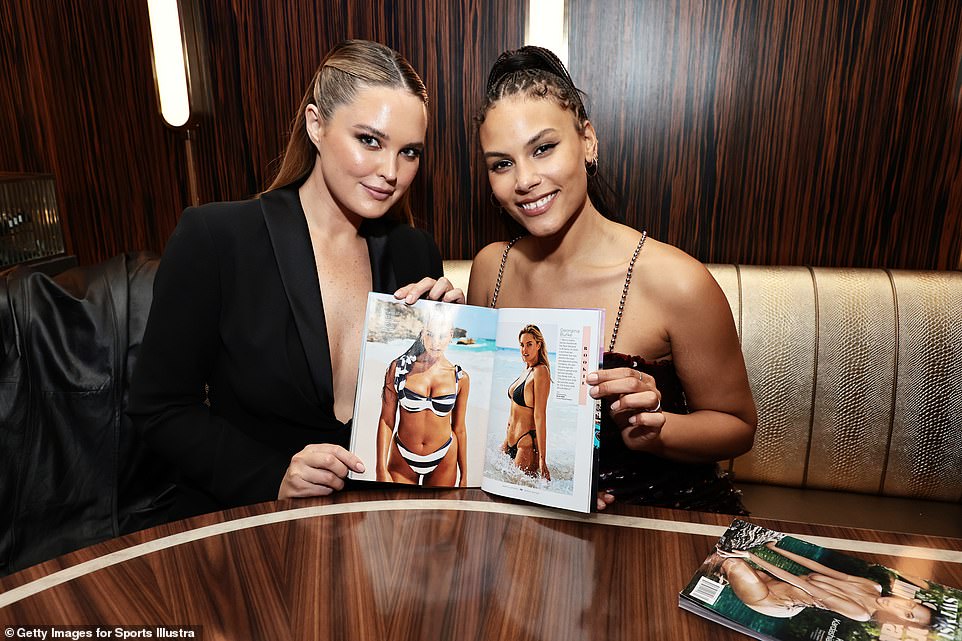 Page turner! Georgina and Marquita admired their features in the mag 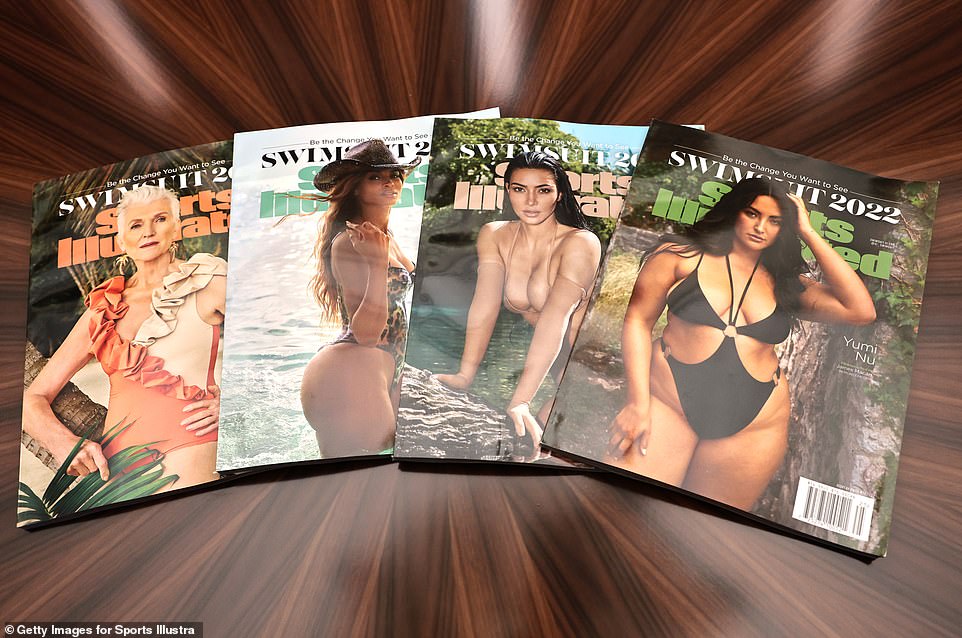 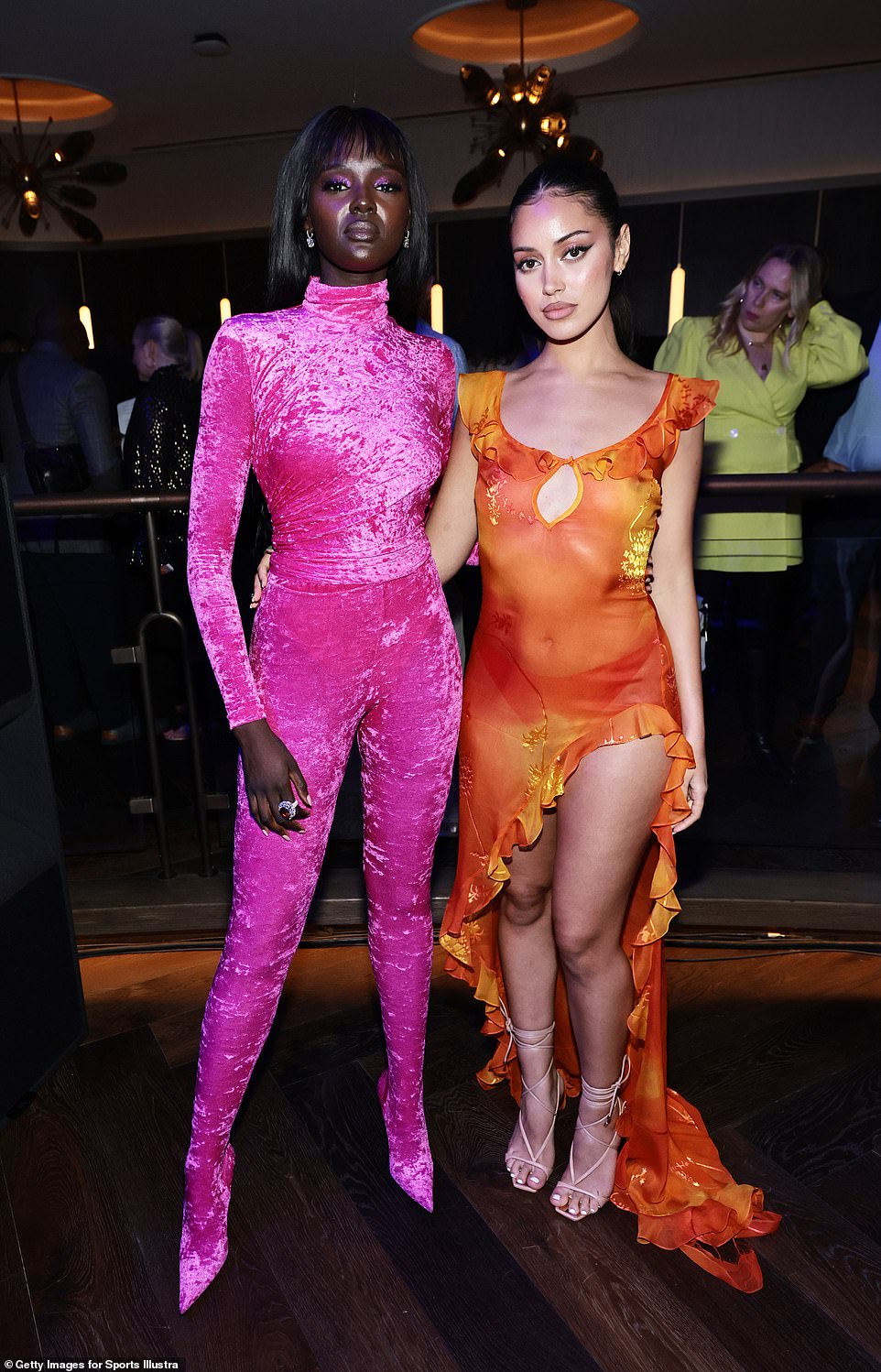 Fashionistas! Duckie and Cindy put on a head-turning display in their vibrant apparel

Musk – the mother of billionaire Tesla and SpaceX founder, Elon – has been a model for more than 50 years now, appearing in campaigns for magazines like Time, New York Magazine, Elle Canada, Women’s Day, and Vogue, and posing for brands like Special K, Revlon, and Target.

She starred in Beyoncé’s music video for her hit song Haunted in 2013, and made history in 2017, when she became CoverGirl’s oldest spokesmodel at age 69.

She also wrote her own memoir in 2019, called A Woman Makes a Plan: Advice for a Lifetime of Adventure, Beauty, and Success.

Ciara, who was famously behind songs like One, Two Step, Level Up, and Body Part, has now sold 23 million records worldwide.

She has also tried her hand at modeling, acting, producing, and designing over the years – and dedicates much of her time to giving back.

Nu, 36, a Japanese and Dutch recording artist, became the first-ever Asian plus-size model to be featured in SI Swim as a rookie last year – and it launched a huge modeling career for her. 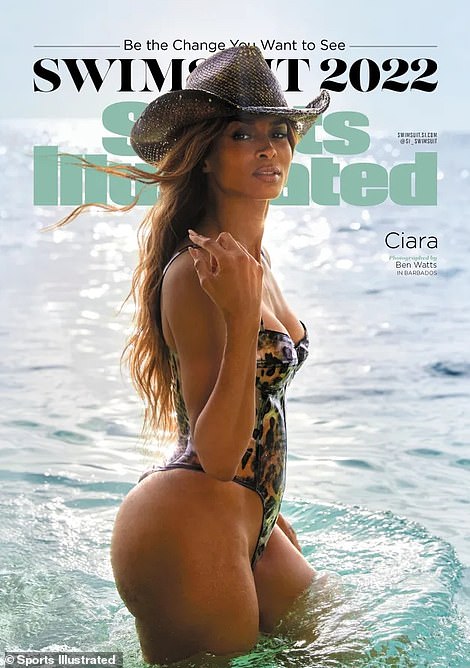 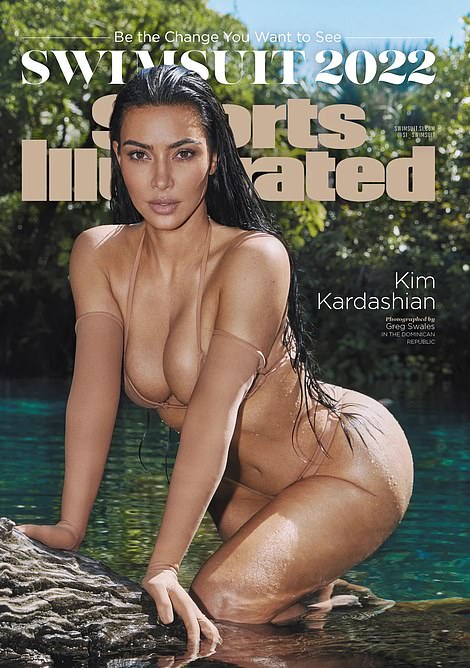 Making a splash! Ciara and Kim Kardashian dropped jaws as one of the four women to have landed their own covers 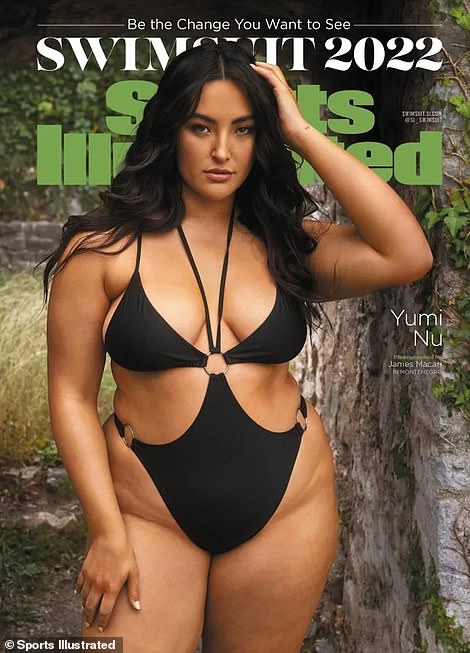 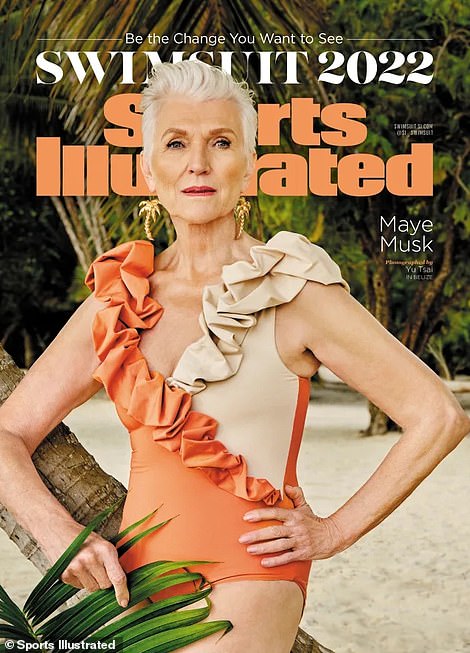 Ready for swimsuit season! Yumi and Maye wowed on their respective covers

Former Disney CEO Bob Iger battled with the company’s board over...

Artificial intelligence is getting artistic for Scotland

What are bonds, how do they differ from gilts, and where...

Ted Baker’s Pet in US Authentic Brands May Apply for Fashion...