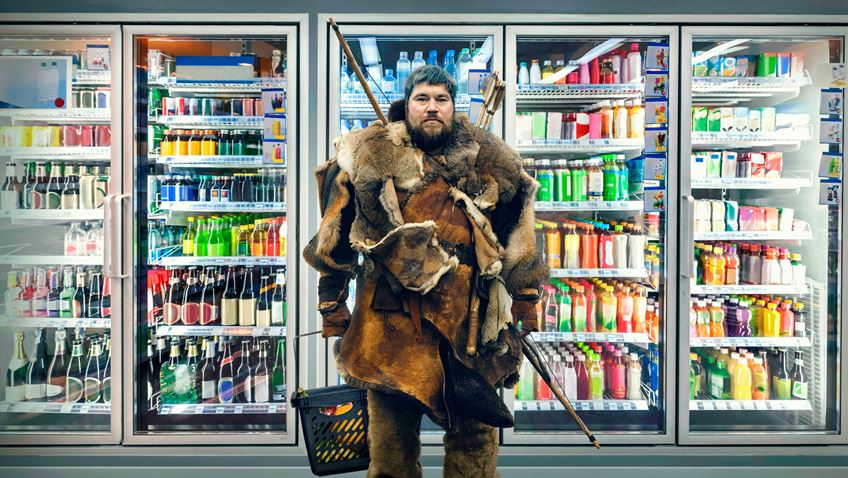 Recently, The Times The newspaper reported that former advertising manager Harry Wallop has given up his six-figure salary and comfortable urban lifestyle to live off the net in a makeshift cabin in Dorset. He made this decision when his deteriorating mental health made it difficult for him to cope with normal working days. Such a lifestyle change, though more radical and much more bizarre, is the starting point of Thomas Daneskov’s entertaining Danish black comedy Wild people. A funny joke with a serious message, the film is reminiscent of a wonderful Norwegian comic book thriller by Morten Tildum Bounty Huntersif the film lacks tension and sophistication.

We find ourselves in the media really when a burly bearded man, dressed in animal skins and armed with a bow and arrow, robs a shop at a gas station somewhere in Norway after an attack on the owner. We have previously witnessed him miss out on his goal in the wild and possibly as a result of sobbing.

This man is Martin (Rasmus Bjerg), nominated for his Danish accent, who later in the film, as we learn, was happily married to Anne (Sophie Rake), who is proud of her two beautiful daughters and a beautiful home.

Although the wishing Viking does not seem to pay attention, he is wanted: wanted by his family, who is traveling from Denmark to find him, and incompetent local police, whose hunt is compromised by an officer who, unlike Martin, wants return home to wife and home dinner.

There are two parallel stories that go hand in hand and intersect with Martin’s story. The first concerns a trio of cannabis smugglers heading for a ferry to Europe when their car hits an elk and crashes. Musa (Zaki Yousef), nominated by this ethnicity, has an open wound on his thigh, but he is in better shape than his two crime partners, who are covered in blood and unresponsive when he tries to wake them up.

When police have to find them, he limps with a bag of cash when Martin finds him lying in the woods in pain. Martin offers to take Musa to the hospital. When Musa refuses, Martin closes his wound in a scene that is not for the faint of heart.

Police find the wrecked car, only two smugglers survive and search for Musa in a motel near the ferry port. Musa and Martin are now being chased by two criminals and the police. Although they are chalk and cheese, these two wanted men impose a bond in adversity. They head to a modern Viking camp, where Martin hopes to find kindred spirits, but finds only hypocrisy and frustration.

The second parallel story introduces Detective Inspector Oyvind (the wonderful Bjorn Sundquist), whose character fits into the Scandinavian noir tradition we see on television. Oyvind, though a little older, is usually a talented and devoted but sad and tired of the world detective, exhausted by the system and his failed personal life.

As Oyvind is patient with his two assistants, he misses his deceased wife and may feel guilty for not having time to spend time with her during her illness. There is a touching scene in which Oyvind meets Anne and seems determined to reunite her stupid husband with a loving strong woman and mother, whom he takes for granted.

With the exception of Oyvind, Daneskov avoids the gloom of Scandi Noir, on the one hand, and the quirky, vague, mannered style of the great director, Finnish Aki Olavi Kaurismäki, on the other, to find his own style. The result is an uneven tone – there is not enough laughter in this absurd pursuit in the film – and it is difficult to deal with Martin or, to the end, to sympathize with him.

Does he rob a HUNDRED store because the Vikings don’t trade money and he retains his character because he feels entitled to free food, or because he lost it and settles accounts by force? A similar situation occurs in a Viking camp, where Martin charms a woman who serves food until she asks for payment, after which he becomes hostile.

Perhaps Martin believes that those who live in the wild like him should share, and he sets an example by sharing with the Museum the food and the little medical help he can provide. He is also ready to help Musa escape from his crime partners and the police, ignoring the cash in Musa’s bag that doesn’t interest him.

And one does not have to be Freud to suspect that Martin is compensating – with his macho, Conan the barbarian and self-sufficient, cruel way of life – the feeling of upbringing in his bourgeois life in Demark.

Several scenes stand out. In addition to Oyvind’s conversation with Anne, the two dead souls and the meeting of Musa and Martin, there is a devastating scene where Anne finds her husband dressed in animal skins and camouflaged so that he is not found by a search party. Several scenes are missed, including a plot with a rabbit and Oyvind’s last stand.

Daneskov keeps his three threads in motion and deftly intersecting to a beautifully ambiguous end. Wild people not on par with Bounty Hunters (Norwegian), A woman at war (Icelandic-Ukrainian) or Jar Cit (Icelandic), but, for a fresh variation on the theme of the midlife crisis of men, it provides a satisfying combination of a silly adventure saga and a film about friends from a writer-director who feels a true relationship.

A wild Nordic romp with a serious message

Anna Richardson says she will “never be ready to break her...

Resignation of the cabinet: who stays and who leaves? Ministers...

A friend blamed police for a police mistake that called her...