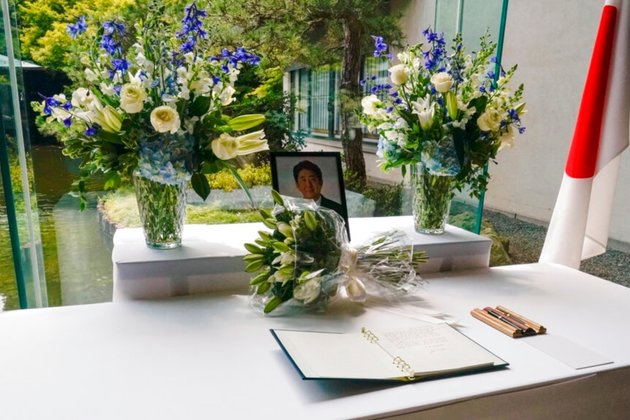 US President Joe Biden expressed his condolences to the Abe family. “This is a tragedy for Japan and for everyone who knew him,” he said in a statement.

Biden talked about his personal connection with Abe.

“I had the honor of working closely with Prime Minister Abe. As vice president, I visited him in Tokyo and welcomed him in Washington. He was a supporter of the alliance between our peoples and the friendship between our peoples,” Biden said. “Japan’s longest-serving prime minister, his vision for a free and open Indo-Pacific will live on.

“Above all, he cared deeply for the Japanese people and devoted his life to serving them. Even at the moment when he was attacked, he was engaged in the cause of democracy.”

Biden said he ordered the U.S. flag to be flown at half-staff in Abe’s honor.

US Secretary of State Anthony Blinken issued a statement saying: “Prime Minister Abe has been a world leader and steadfast ally and friend of the United States, whose vision for a free and open Indo-Pacific region has taken our alliance cooperation to new heights.”

Former US President Barack Obama said in a statement: “Abe was committed both to the country he served and to the extraordinary alliance between the United States and Japan. I will always remember the work we did to strengthen our alliance, the moving experience of going to Hiroshima and Pearl Harbor together, and the kindness he and his wife Akie Abe showed me and Michelle.”

Japan’s current prime minister, Fumio Kishida, condemned the “unforgivable act”, saying: “Free and fair elections, which are the roots of democracy, must be protected no matter what. We will not win with violence.”

A spokesman for UN Secretary-General Antonio Guterres also issued a statement on Friday.

“My family and I are deeply saddened to hear the news of the sudden and tragic death of former Prime Minister Shinzo Abe,” the Queen said. “I have fond memories of meeting Mr. Abe and his wife during their visit to the United Kingdom in 2016. His love for Japan and his desire to forge even closer ties with Britain were evident.’

Indian Prime Minister Narendra Modi said he was “shocked and saddened beyond words”. Modi also said India will observe one day of national mourning on Saturday as a mark of respect to the former prime minister.

Many other world leaders reacted to the news, including leaders from Canada, Germany, Pakistan, Sweden, the Philippines, Australia, Spain, France and Italy.

The International Olympic Committee praised Abe’s “vision, determination and reliability” for moving the Olympics to Tokyo for one year due to the spread of the coronavirus around the world. The IOC said the Olympic flag will be flown at half-mast at the Olympic House in Lausanne, Switzerland, for three days.

Aubrey Plaza is reprising her legendary Parks and Rec role on...

Variety has become the USP for iGaming platforms –