Newsheadlinesuk.com
Home Business What are stress tests? Explanation of investment 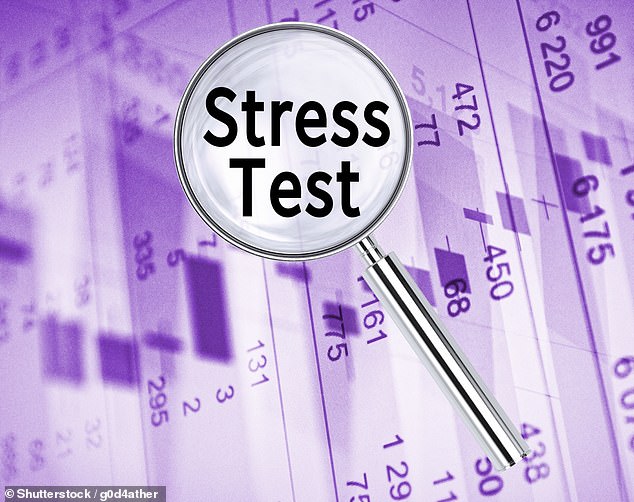 INVESTMENT EXPLANATION: What you need to know about stress tests – in which a financial institution demonstrates that it can survive a major shock

In this series, we break down the jargon and explain a popular investment term or topic. These are stress tests.

In the world of money, not the world of medicine, it’s the process by which a bank, insurance company, or other financial institution demonstrates that it has sufficient capital — and the right internal control procedures — to survive a severe shock.

Shocks include a sudden reversal in the economy or a catastrophic fall in the stock market. Tests set by central banks such as the Bank of England of Great Britain or the Federal Reserve System of the United States are simulated by computer.

Under pressure: Tests set by central banks such as the Bank of England of Great Britain or the Federal Reserve of the United States are simulated by computer.

How often are these tests performed?

Every year the Bank of England conducts stress tests of the largest banks and building societies, while the rest must carry out their own checks in accordance with a scenario set by the Bank’s Office of Prudential Regulation.

Last week, the Bank announced that this year it will ensure the financial sector’s ability to withstand severe downturns in the UK and global economy.

It increases the amount of money banks must set aside as a “countercyclical capital buffer” from 1 percent of their assets to 2 percent.

The move, which will force banks to set aside an extra £11bn, comes in response to a marked deterioration in the global economy and growing concerns about the impact of the cost of living crisis on household incomes.

What does the bank think?

Andrew Bailey, the Bank’s governor, said our banks were well placed to weather the deep downturn, but their capital ratios – their weapons against adversity – will be hit over the next few months.

Bailey also told banks that keeping loans from customers is not a way to shore up their reserves.

How are the American banks?

The latest tests conducted by the Federal Reserve System – “the Fed” – showed that the 33 banks involved in this were in good condition with comfortable capital.

The Fed said these banks could lose a combined $612bn (£510bn) in a recession, but their capital levels would still be above the required minimum.

Why do we hear so much about stress tests now?

There is controversy over the Bank’s decision to cancel its current mortgage stress tests next month.

Those rules, introduced at the end of the financial crisis, required banks to determine whether mortgage borrowers would face hardship if they were forced to pay a rate 3 percent higher than their lender’s standard variable rate.

That meant they had to afford repayments if the rate rose to 7 or 8 percent.

The requirements are less stringent, which critics find somewhat surprising at a time when inflation is soaring, reducing borrowers’ incomes.

I see there is a book called The Stress Test. Is this a guide to stress testing?

No. This is the memoir of Timothy Geithner, who was the US Treasury Secretary during the global financial crisis.

The book will take you behind the scenes of unusually tense discussions behind the rescue of banks.

Reading this account of how the financial system was prevented from collapsing is certainly stressful.

These 13 historic pictures offer a fascinating glimpse into a bygone...