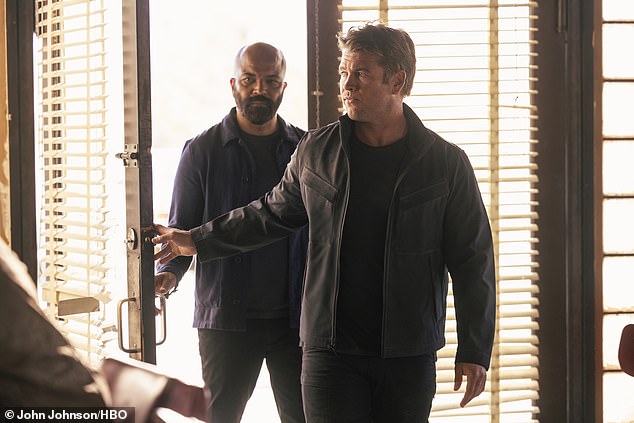 The title of the episode is taken from a French term that describes the social and cultural upheavals of the Roaring 20s, which is very appropriate since this is when the new Westworld park takes place.

Last week’s episode featured Maeve (Tandiv Newton) and Caleb (Aaron Paul) explore the new park, which they continue to do in the third episode.

The episode opens with Bernard opening his eyes and putting on his glasses while Josh takes the maze from his hands and runs away.

As Josh steps outside, Bernard finds a completely different setting as the tree in front of him suddenly catches fire.

He enters the saloon as a white horse gallops past and sees several dead owners lying on the ground.

He transitions into another much different setting, following a white horse, when he finds a circular maze on the ground and looks up at a massive tower – the same one teased in images from previous episodes.

Bernard goes inside and finds a white horse when Bernard is greeted by a man who says it’s good to see him again.

‘Where am I?’ Bernard asks, and the man says he’s in our world, and Bernard asks where the others are?

“In worlds of their own choosing, they have no reason to be there,” as Bernard says, “the world is in trouble there, it needs our help.”

He says that times are very different there and all paths end in destruction, and he must intervene if there is any hope of survival.

Bernard sees flashes of other shots flashing at the same time, and the man asks if he understands where this is going, and Bernard says he does.

“Do you think you can save them?” the man asks, as Bernard says, “I saw the trail.”

The episode cuts to a dusty Bernard sitting in a hotel room with a halo around his head as Ashley arrives, saying he thought this day would never come.

Ashley says he’s been gone for years and Bernard says he’s ruled out half the possibilities.

Bernard thanks him for keeping it clean and tells Ashley to fetch a shovel, which Ashley finds outside and puts in the trunk of her car.

Bernard comes out after cleaning up and says he has a few things to check on how to save the world.

“Why would I expect anything else?” Ashley asks before getting into the car and taking off.

The trailer for the new episode also shows the iconic maze that William (Ed Harris) has been trying to decipher for years, but to no avail.

William has now been made the host, although the only one who knows he’s the host is Charlotte Hale (Tessa Thompson), who was seen talking to the real William – or what’s left of him – in last week’s episode.

Lead William, under Charlotte’s guidance, has been busy in season 4 protecting the land around the Hoover Dam and all the data inside it.

The Maze: The trailer for the new episode also showed the iconic maze that William (Ed Harris) has been trying to decipher for years, but to no avail

He also took the rather daring step of killing the Vice President (Jose Zuniga) and his Secret Service agent with the help of Clementine (Angela Sarafian).

Whip said that William can do whatever he wants abroad, but he will not support the opening of a new Westworld park in America.

So William simply ordered him killed, replacing him with a master version that would do his bidding, leading to the opening of the Roaring Twenties theme park.

William: So William simply ordered him killed, replacing him with a master version that would do his bidding, leading to the opening of the Roaring Twenties theme park

Maeve and Caleb see the Roaring Twenties in the park, and Maeve adds that “they made some changes, but the story is the same.”

They also see themselves encountering Master William, though it seems that with Maeve’s powers, she’ll probably find out he’s the master.

Maeve and Caleb: Maeve and Caleb see Roaring Twenties in the park and Maeve adds that “they made some changes but the story is the same”

Williston police share dashcam video after a truck crashes into a...

Michael Martin says that it is “difficult to fathom the level...

Ukrainian sailors trained in Scotland to fight against Russia