Newsheadlinesuk.com
Home United Kingdom Ukrainian soldiers are training in Great Britain while the war with Russia... 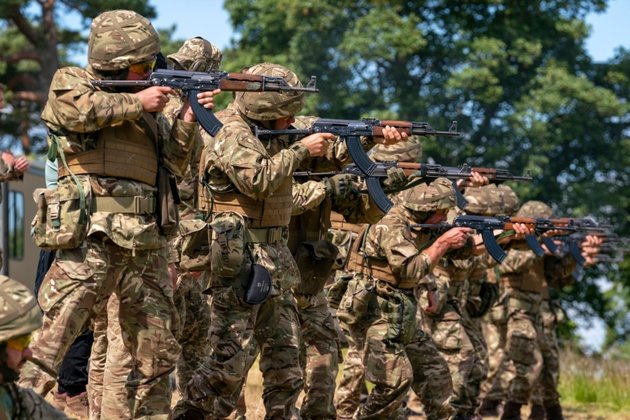 London – The first cohort of Ukrainian soldiers, many with no previous military experience, have arrived in Britain for combat training as the eastern European country seeks to replace troops killed and wounded in its war against Russia.

The first few hundred recruits are being trained at facilities across Britain as part of the first phase of a program aimed at training up to 10,000 Ukrainian troops in weapons handling, battlefield first aid and patrol tactics, the UK Ministry of Defense said. It is part of a wider package of support for Ukraine that includes 2.3 billion pounds ($2.8 billion) of anti-tank weapons, missile systems and other equipment.

“Using the expertise of Britain’s world-class military, we will help Ukraine rebuild its strength and build resistance as they defend their country’s sovereignty and their right to choose their own future,” Defense Secretary Ben Wallace said.

As part of the program, Britain purchased AK-type assault rifles so that the Ukrainians could train with the weapons they would use on the front lines. The UK will also provide soldiers with personal protective equipment, including helmets, body armor, eye, ear and pelvis protection, individual first aid kits, as well as field uniforms and boots.

The goal is to quickly turn civilians into effective soldiers, Sgt. Dan Hayes told The Times of London about it.

“All these guys were (truck) drivers, or worked in quarries, or owned stores,” Hayes said. “I have been in the army for 14 years and decided to go. All these guys are civilian (civilian) … and we’re putting in everything we can because we know they’re going to need it.”

The fight over pregnancy drugs points to the risk of the...

The latest Russian-Ukrainian war: what we know on the 214th day...