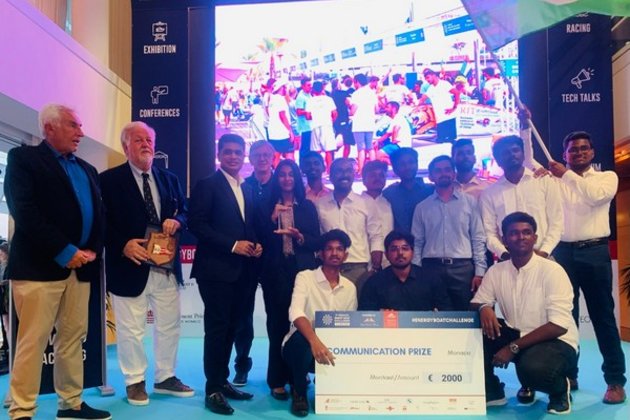 Team India enjoyed the most support among the 38 participating teams. Team India is ranked 6th overall in qualifying, endurance and slalom. In the Energy class, the Italians won on UniBoat (Italy), and in the Solar class, Sunflare Solar (Netherlands) did it again after winning in 2021. The Open Sea class was won by the Brits with Vita Lion. walked away with this trophy.

Speaking to ANI, Mohan, pilot of Team India Sea Sakthi, said, “Team India was the team that enjoyed the most support at MEBC. Overall performance or all the technical ways we secured sixth place overall. About 16 teams participated in the Energy Class competition. We secured sixth place in the endurance race and fifth in the slalom. This was our first participation. We have a year to prepare for next year’s MEBC and I hope we secure a top three finish. “Sumit Anand, President of the Indo-French Chamber of Commerce and Industry (IFCCI) congratulated the Indian team. He said Team India demonstrated young India’s ability to innovate on the planet’s pressing challenges, such as climate change, and how countries as diverse as Monaco and India can come together to address these challenges.

“We hope to have more teams from Indian universities to participate in the MEBC in the future. Every year we have more and more imaginary innovations. I’m sure we can get more involved. I am completely sure of that. Because India has many universities and companies that make the future stable. I hope to see the development of relations between India and Monaco,” he added.

Francesco Praccia, general manager of Monaco SBM Offshore, a company with more than 6,000 employees worldwide and sponsor of Team India, headquartered in Bangalore, said: “Our role is to facilitate such important events. As a company, we recognize that the energy transition is ongoing. We are an energy company. We believe that events like MEBC are a unique stage to test a technology that may have a future in this field. This is our fourth year participating in MEBC.” Praza further said that the company is based in India and is actively looking for talent. They handle engineering, supply chain and fleet support. “We are very happy to sponsor the team and believe that these guys will be the future of India,” he added.

Myalin Gilbert, team manager of Uniboat, Italy, the winner of the championship, said it was a pleasure to attend the event and it was fantastic to win and to see the results they have been working towards finally come to life.

“I think the best part of the team is how we all try to work together. Even coming mainly from different engineering sectors, we always try to pass on knowledge to the younger students to bring the best boat for the best possible future of sustainable development,” added he

The Monaco Energy Boat Challenge is organized every year under the auspices of the collective Monaco, Capital of Advanced Yachting, the umbrella brand of the Yacht Club de Monaco in partnership with the Prince Albert II of Monaco Foundation and with the support of Credit Suisse, BMW and SBM Offshore, as and the Oceanco shipyard. (ANI)

A North Yorkshire mum is launching a drug addiction campaign to...

Apple is now an advertising company