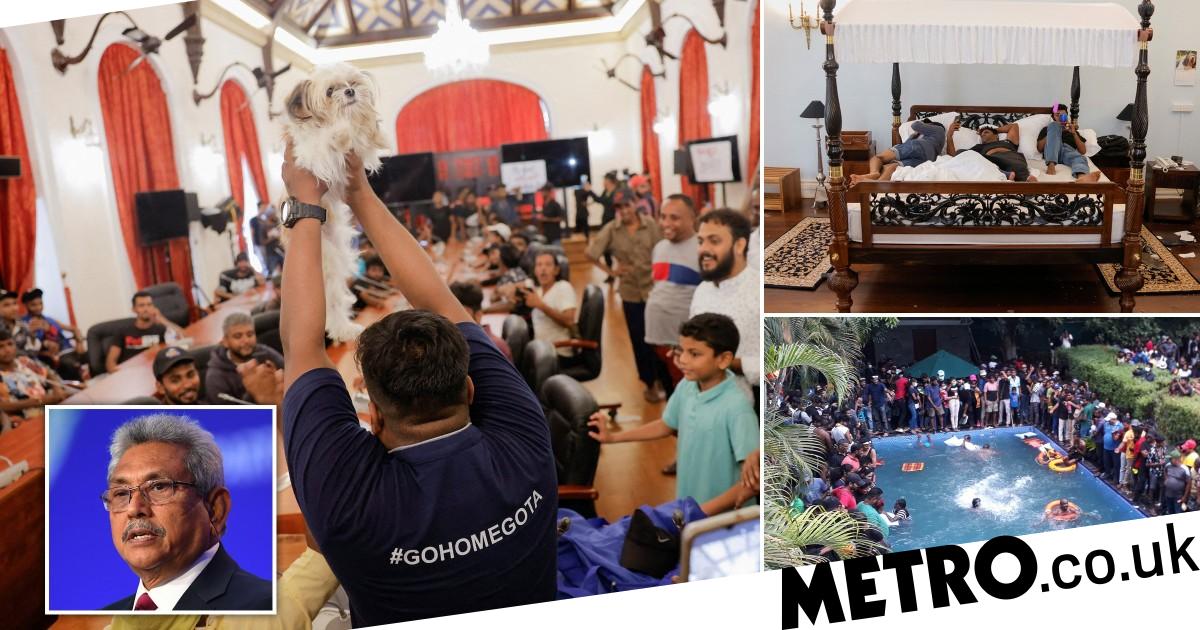 The whereabouts of Sri Lanka’s president are “unknown” following mass protests across the country.

Yesterday there were extraordinary scenes when thousands of people stormed the luxurious presidential palace in Colombo.

Today, many feel at home waiting for the official resignation of Gataba Rajapaksa from the presidency.

The group vowed not to leave until he confirmed he was stepping down.

People have been photographed sleeping on Mr. Rajapaksa’s bed, swimming in his pool and relaxing on the palace’s luxurious furniture.

Some made tea or hit the gym, while others made statements from the conference room demanding that the president and prime minister leave.

Clean-up operations began today, with protesters swapping their flags and signs for brooms and garbage bags to clear away the debris.

Mr. Wickremesinghe has already said that he will leave his post once a new government is formed.

But protesters are waiting for direct confirmation from Mr Rajapaksa, whose whereabouts are unknown after yesterday’s protests at the palace.

He told the government speaker he planned to resign on Wednesday, but has not directly addressed the nation since his palace was stormed.

It is not yet clear whether Mr Rajapaksa was in his palace at the time of the invasion.

The video appeared on social networks yesterday showed hundreds of protesters fleeing to the presidential residencechanting “Gota go home,” as the president was nicknamed.

Barricades were toppled as protesters pushed past security and stormed the colonial-era parliament building, which had been converted into the president’s office.

Pressure on Mr Rajapaksa and Mr Wickremesinghe to step down increased how people in Sri Lanka are coping with the economic crisis.

The protests have been going on for months as more and more people struggle to get food, fuel and other essentials.

Police tried to break up the planned demonstrations yesterday by imposing a curfew, but it was lifted as lawyers and opposition politicians denounced it as illegal.

Opposition MP Mahinda Yap Abeywardena said all opposition parties together could easily muster the 113 members needed to show a majority in parliament.

If so, they may demand that Mr. Rajapaksa appoint a new government and then resign.

He said the two sides hoped to reach a consensus by the end of today.

Schools were suspended amid economic chaos in Sri Lanka, and fuel use was limited to essential services.

The country is currently relying on aid from India and other countries as leaders try to negotiate aid with the International Monetary Fund (IMF).

Mr Wickremesinghe recently said that negotiations with the IMF were difficult because Sri Lanka was now a “bankrupt state”.

If both the president and the prime minister resign, Mr. Abeywardene will take over as interim president, according to the constitution.

Pakistan to pull out of 2023 World Cup as India pushes...

It’s by no means obvious where this awesome toilet seat hack...

Why do children benefit from Isas worse than adults?

A study shows that parents who smoke put their grandchildren at...