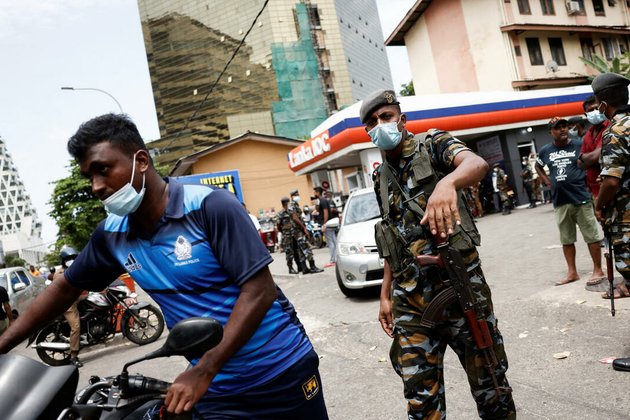 Sri Lankan President Ghatabaya Rajapaksa left his official residence in Colombo on Saturday, according to security sources, when protesters stormed his home demanding his resignation. The government earlier declared bankruptcy amid the country’s worst food and fuel crisis since independence in 1948.

“The president was escorted to safety,” a military source told AFP, adding that troops fired into the air to prevent angry mobs from taking over the presidential palace.

Thousands of people poured into the capital Colombo for the latest demonstration sparked by the island nation’s unprecedented economic crisis.

Prime Minister Ranil Wickremesinghe hinted that talks with the International Monetary Fund (IMF) had hit a wall, but added that Sri Lanka plans to pay off its total foreign debt of €49.8 billion next month.

“In the past, we had discussions as a developing country, but the situation is different because now we are negotiating as a bankrupt country,” Wickremsinghe told parliament about talks with the IMF.

He was appointed prime minister in May after President Mahinda Rajapaksa’s brother resigned four days after anti-government clashes killed 10 people on May 9.

In April, Sri Lanka defaulted on its debt to foreign creditors for the first time in its history, even as it struggled to meet daily expenses.

The island nation needs more than 5 billion euros to import essential goods in the next six months, but only had 1.8 billion euros by the end of May.

The IMF warns that Sri Lanka’s economy will shrink by 7% this year.

Parliament rioted this week, with MPs booing President Rajapaksa, who said he had approached Russian President Vladimir Putin for money and fuel.

Video footage showing soldiers kicking and beating citizens in line at a petrol station in Colombo has angered many.

“Even now, the government seems to think that the solution to all our problems is to make an agreement with the IMF, as if the IMF can come to Sri Lanka, restructure the economy and make everything good,” he told Democracy Now online.

The central bank, which raised interest rates last week to rein in prices, warned that inflation would rise to 70 percent and that the collapse of the local currency had wiped out savings by half.

The government has also decided to close its embassies in Norway, Iraq and its consulate in Australia to cut running costs.

“It’s going to be a bitter road,” the Prime Minister warned as experts said food prices had already risen by a staggering 80 percent.

The World Food Program (WFP) said on Wednesday that 6.26 million Sri Lankans do not know where their next meal will come from.

Drug shortages have already forced some hospitals to postpone operations.

The UN agency said it had offered an emergency food program worth 59 million euros for the three million worst-hit Sri Lankans.

The instability prompted Britain and New Zealand to advise their citizens against all but essential visits, and the US to tell Americans to “reconsider” their travel plans.

France, Canada and Saudi Arabia continue to advise against non-essential travel to the Asian country.

Several other governments have warned their citizens in Sri Lanka to avoid areas of possible confrontation and to plan for shortages of basic necessities.

The London Stock Exchange is closed until the day of the...