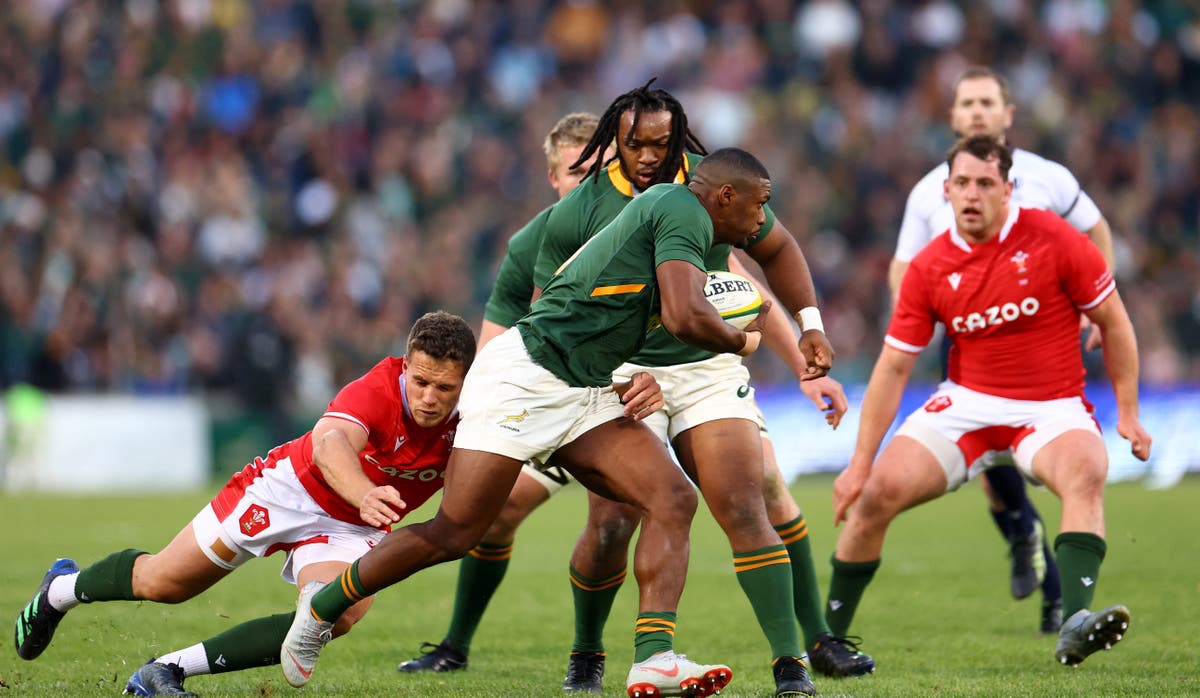 After an instant classic test a week ago, South Africa and Wales face each other again in the second game of the three-match series – this time at the Toyota Stadium in Bloemfontein.

Coming into the game as huge underdogs, Wales were eyeing a historic first ever win over the Springboks in South Africa as they led for most of the game thanks to the pair Louis Rees-Zammit tries and even drew 29-29 at the end after a try at Dewey Lake despite being down 13 men but Damian Willemse broke Welsh hearts with a last-gasp penalty to win 32-29.

It was a a much improved performance from Wayne Pivac after a dreadful Six Nations, but they will need to respond after that late woe to keep the streak alive in Bloemfontein.

Given the experiments before the World Cup, the The Springboks changed 14 starting XVs for the second test – with Eben Etzebeth, the sole survivor of the week before – and Welsh legend Sir Garrett Edwards saw it as a sign of disrespect encouraging visitors to give the hosts a “good tan”.

Follow all the action below in our live blog:

The second half is underway!

In fact, sooner than I even thought, although it’s familiar faces for now – Malcolm Marks in the hooker spot in place of Joseph Dweba, and Vincent Koch joining him in the front row, replacing Trevor Nyakane.

Alex Cuthbert update – The Wales winger’s arm is in a sling after leaving the field early in pain. Considering the number of straps around Josh Adams’ knee, you really do wonder how fit he is. South Africa may target the left flank in the second half.

Notably, the Springboks have maintained their trademark 6-2 bench split despite all the changes. There are three potential debutants among the forward six and plenty of beef that I imagine we’ll see at some point fairly soon after the restart.

South Africa are clearly targeting a Welsh line-up that brings joy, while they also had a slight advantage during the scrums. But all those changes are arguably to their detriment – it’s only half gone from the Springboks in every aspect, with plenty of frustrating inaccuracies.

Wales, meanwhile, keep the ball in play and fight in the air when they can – again, it’s working to an extent, but they’re really lacking in attacking wins, which prevents them from building momentum on that.

Not much to report from this half. South Africa clearly have the lead and are playing in the right places, but both sides make mistakes too regularly, which has prevented this encounter from developing any flow or buzz. The attacks were clumsy, the defense tight and every kicker missed the ball – not the best first 40 minutes, overall.

Evan Roos thinks he’s racing to the line as he collects another loose ball, but there are South African hands involved as it hits the deck. Roos smiles as he trots back – knocking South Africa, Welsh scrum.

Wales win a penalty in the scrum but Dan Biggar has seen a rather unsightly half of rugby. Pressed and crashed into the front row – further down the tunnel to the oranges at halftime.

Another chance to attack for South Africa; another rather atypical mistake. Wales manage to shut down the game in the early stages and this much-changed Springboks side seems to lose form after that. It’s Andre Esterhuizen this time groping forward.

Still, the score remains 3-3, and the half-time buzzer will soon sound.

The obscenity on both sides continues. After some good work by Warwick Gelant, the ball breaks out from under the back of the Welsh ruck and Joseph Dweba makes a dash down the right, beating Dan Biggar who decides to go high.

Dweba makes a comeback but finds a lack of support, allowing BIggar to corner him and wrestle him from the hooker’s outstretched arms. Biggar makes contact.

It’s better than Wales! The running play doesn’t go in, so Dan Biggar goes to boot, kicking a great cross which Louis Rees-Zammit neatly flicks back inside to the onrushing Liam Williams.

South Africa responded quickly with Williams forced to kick again, the ball once again touching the white line on the bounce.

Truss announces her new cabinet with key roles for her closest...

More than half of young Brits want jobs that ‘make a...

MarketFinance is providing a £30m line of credit