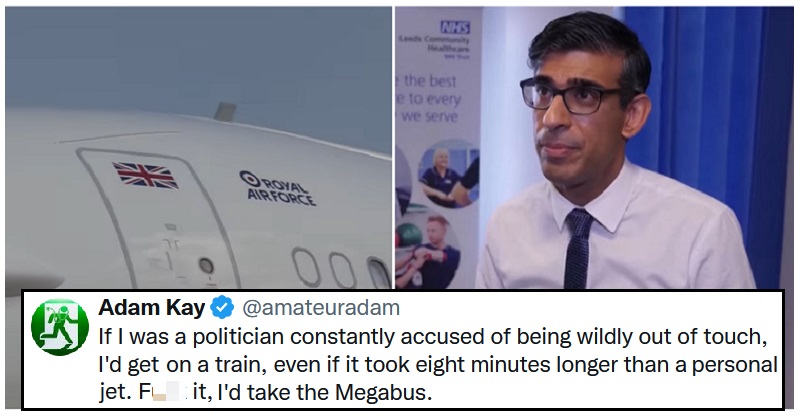 It is not the first time that a British Prime Minister has made a trip in an unreasonably expensive and climate-damaging way solely for the sake of prestige or convenience.

There was Liz Truss Flight to Australia for 500 thousand poundsBoris Johnson flight to Cornwall to discuss climate change and Johnson’s other jaunts on a jet from holiday to the Cornish and to Blackpool to take a photo, to name but a few.

The current Prime Minister’s choice of a private jet to visit Leeds Hospital has been criticized, with many pointing out the terrible optics of ordinary people struggling with the cost of living, while others cited the government’s green pledges.

NEW: On Monday, Rishi Sunak left for Leeds on board a plane with fourteen passengers.

It comes after the government promised a “jet zero” strategy in July last year. https://t.co/3d8YWtmg41

NEW: Rishi Sunak flew to Leeds yesterday on a private jet, say #10, because it was the most efficient use of his limited time. ✈️

Glad to see that the richest Prime Minister in our history has not been affected by the strikes. Or the climate crisis. Or the cost of living. https://t.co/6nnoDNtkaB

If I were a politician constantly accused of being out of touch, I’d take the train, even if it takes eight minutes longer than a private jet. Hell, I’d take the megabus. https://t.co/iy3UZmbmI0

There’s no connection, then it’s…https://t.co/FsDv7ivQwL

Not sure why more nurses don’t do this. https://t.co/Rl09VK0AkF

Climate change and no future for children or efficient use of time, such a tough task https://t.co/dG4dFRifne

What they mean is that he will only be prime minister for a limited time, so he needs to use a private jet when he can. https://t.co/tJ4K1xcr3T

*Long, tired sigh as I continue to separate my recycling* https://t.co/1Q2A4cx1k3

We are completely out of touch with PM. How can we trust him with both our public services and our UK response to #ClimateEmergency? Answer: we cannot. He is useless. https://t.co/vo1jGutwa8

In truth, his party launched the health, transport and education systems we all need to use, so what’s a busy prime minister to do?

I wonder if he realizes that many of us are “busy” too, so we need things to actually work! https://t.co/gG56jcPANX

Rishi Sunak, November 7, 2022: “we can turn our fight against climate change into a global mission.” https://t.co/tXOIyf4VA7

Rishi Sunak, the person in charge of our public services, enjoys private health, private jets and went to private school.

Rishi Sunak has flown to Leeds on a private jet because he believes he is rich enough to avoid the worst of the climate meltdown and that everyone else is wasted. ✈️🔥 https://t.co/y92maTbJtz

We can’t help but wonder who could do the job that John Elledge is proposing here.

I was again impressed by the fact that there was no attempt to neutralize the “untouchable” line of attack. He’s so disconnected that he doesn’t realize he could benefit from someone whose job it is to let him know when he looks disconnected. https://t.co/YVJbY8Qayf

We hear Boris Johnson has a lot of free time these days.

CHRISTOPHER STEVENS looks back on TV’s past: ‘When I’m young today,...

Morrisons says he didn’t turn off the beeps when ordering the...

The most popular startups in Amsterdam