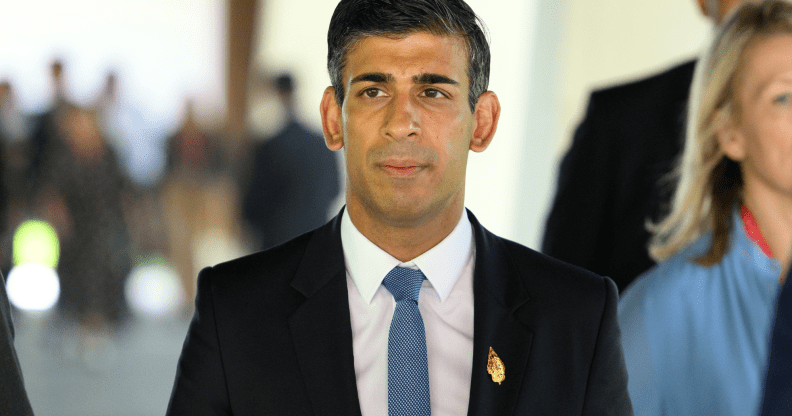 Rishi Sunak said he was “concerned” about how gender law reforms in Scotland could affect the rest of the UK.

The The Prime Minister visited Scotland yesterday (January 12) as part of a two-day trip to jointly announce the first freeports north of the border, located in the Cromarty Firth and Forth, with Scottish First Minister Nicola Sturgeon.

Sunak also met Sturgeon yesterday to discuss issues including the NHS, the economy and Scottish independence.

The meeting marked the first time Sunak had traveled to Scotland since the start of his premiership and the first meeting between the two leaders since Scotland hosted Gender Recognition Reform (Scotland) Bill..

The bill passed 86-39 in December 2022 and removes the need for a psychiatric diagnosis of gender dysphoria in order for people to obtain a Gender Recognition Certificate (GRC), and lowers the age limit from 18 to 16.

The new legislation will reduce the amount of time a person must have permanently resided in their acquired gender before they can apply for a GRC from two years to three months, or six months for 16- and 17-year-olds, from three- a month-long reflection period during which a person can change their mind.

The process for obtaining a GRC remains the same in England, Wales and Northern Ireland.

After the new legislation was passed, the UK government, including Scottish Tory secretary Alistair Jack, was quick to suggest it could block the gender bill from receiving royal assent through a never-before-used provision in the Scotland Act.

“We share the concerns of many people about certain aspects of this bill, particularly the safety issues of women and children,” Mr Jack said in a statement to PinkNews.

“We will be looking closely at this and the implications for the Equality Act 2010 and other UK-wide legislation in the coming weeks – up to and including section 35 of the order, which stops a bill going to royal assent if necessary.”

The Prime Minister’s meeting comes days after Minister for Women and Equalities Kemi Badenoch announced a review of the approved list of countries and territories whose gender reassignment process is recognized by the UK.

This may include GCRs obtained in Canada, Australia and New Zealand.

Equalities Minister Badenach, who also represents Saffron Walden in Essex, told the House of Commons on Monday (January 9) that the Government would update the list to “make sure it does not compromise the integrity of the Gender Recognition Act”.

Mr Sunak told presenter Laura McIver he was “concerned” about the effect the bill would have on the rest of the UK.

He said: “Obviously this is a very sensitive area and I know there was a lot of debate and exchange of views in Scotland when the Bill was passed, but I am concerned about the impact of the Bill on the UK and quite naturally the UK Government will take advice on that questions.

“The fact that you’re asking these questions shows that there could be consequences that we need to be aware of and understand the impact of.”

Asked about Ms Badenoch’s statement and what it might mean for Scots with gender recognition certificates, the Prime Minister said it was “sensible” for the Government to examine the implications and the new law.

“The process here is completely standard, and I really want to convey that to people.

“I think it is reasonable that when the Scottish Parliament passes legislation, the UK Government would be wise to consult on the impact of that legislation on the UK and then decide on the best course of action.

“The government is awaiting final advice and then we will outline the next steps in due course,” he said.

This week, LGBTQ+ leaders and the wider community condemned the government’s response to the Gender Recognition Reform (Scotland) Bill.

More than 145 LGBTQ+ leaders across the country wrote an open letter to the Prime Minister urging him to stop the government’s plans to block the bill.

For now thousands of people sent emails to their MPs urging them to take action on the UK government’s response.

MAFS’ Olivia Fraser has put on a brave face following her...

Attendees turn up the glam at Venice Film Festival’s ‘The Whale’...

Get £175 for switching your bank account to NatWest or RBS

Police are reporting a disturbance that has closed Mitchell Lane near...