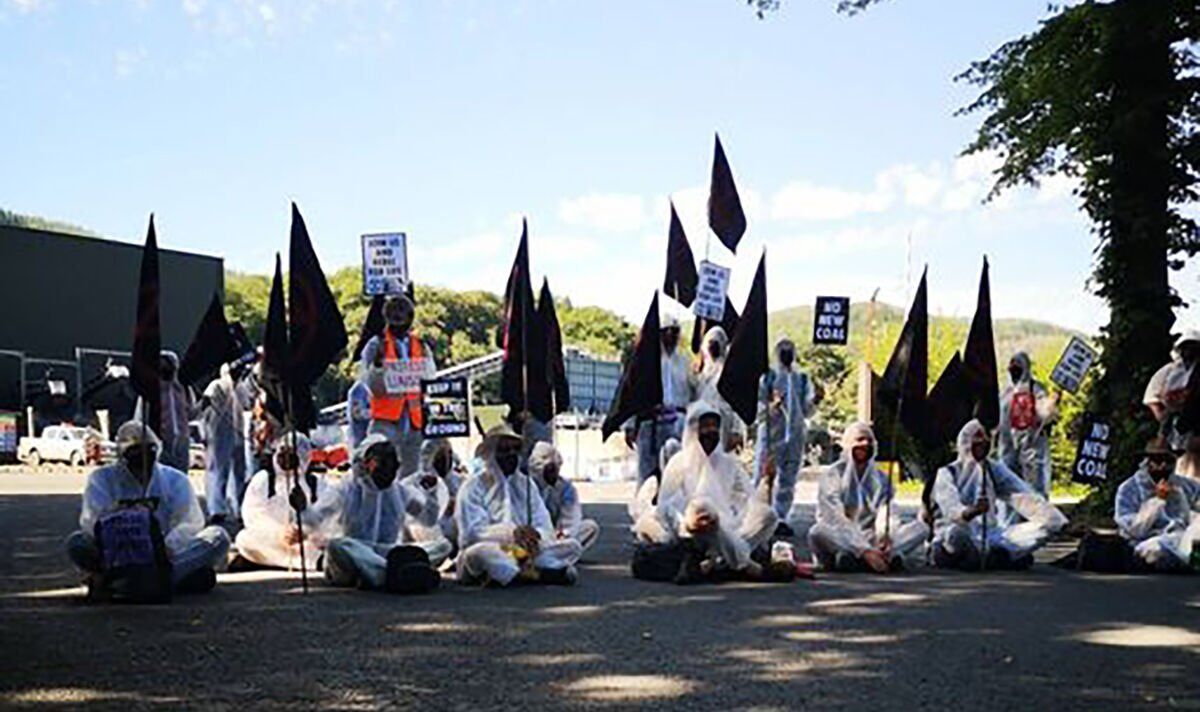 More than 60 activists entered the Aberpergwm mine in south Wales at around 3pm on Sunday. They wanted to “highlight the Welsh Government’s silence on the decision to allow an additional 42 million tonnes of anthracite coal to be licensed”.

The protesters were dressed in white overalls and waved black flags, firing powder rockets and climbing onto the roof of the office, where they remained overnight until Monday morning.

The XR environmental protesters have not said how long they plan to occupy the site, but shortly after 11am this morning, organizers confirmed that all activists had left the premises.

They said it was both voluntary and through arrest.

Police have confirmed that seven people have been arrested on suspicion of aggravated assault. reports Wales Online.

A spokesman for South Wales Police said: “The incident has been closed. Two other people have been arrested on suspicion of aggravated assault.”

The group claims the new mine license will breach the Welsh Government’s Wellbeing of Future Generations Act by allowing 100 million tonnes of CO2 to be emitted.

The protesters demanded that First Minister Mark Drakeford and Climate Change Minister Julie James write to the Coal Authority stating their “clear and urgent opposition” to the coal mine expansion.

XR accused the Welsh and UK governments of “pointing fingers at each other” for failing to intervene in the mine expansion.

Pressure group Coal Action Network has won a judicial review to see if the Welsh Government can apply the Wales Act 2017 to the Aberpergwm expansion licence.

The review will also test whether the Coal Authority can consider a wider range of factors when deciding on a license application.

But people flocked to Wales Online’s Facebook page to express their frustration with the protesters.

One person commented: “Kick them out straight away and fine them for wasting the police’s time.”

Another person said: “Where’s their hi, they need to be thrown off the site and prosecuted for breaching health and safety at work!!!

A third person added: “Shut them down. We need this fuel to filter our water and on top of that we have an energy crisis, but most of them are wealthy middle class people who have nothing to do.”

A spokesman for the Coal Action Network said: “It started with more than 4,000 emails demanding that the UK and Welsh Government stop this license before it was issued by the Coal Authority.

“Ministers in Great Britain and Wales alike ignored all these emails and failed to deliver on their promises to ditch coal when the license slipped through weeks later.

“The coal mine expansion alone will release 1.17 million tons of methane regardless of where it sends the coal.

“This cannot be made compatible with the Future Generations Act and the Welsh Government’s rhetoric up to this point.

“What we want now is a crystal clear statement from the Welsh Government that it opposes this coal mine. Without “ifs” and “buts”.

However, some people sided with the protesters, with one person writing: “People here don’t seem to understand the very serious danger we are all in.

“So some feel compelled to act.”

Another said: “We need to do something about climate change.”

The mega-blinking Liz Truss goes so well with The Thick Of...

Luke Daly has been banned from Eastleigh after breaching a restraining...

Call for new offense for failing to report child abuse –...

Ferrari plays down the effect of the “pig” rules.

Barbara Smith is ‘broken’ as EastEnders star shares her mother has...