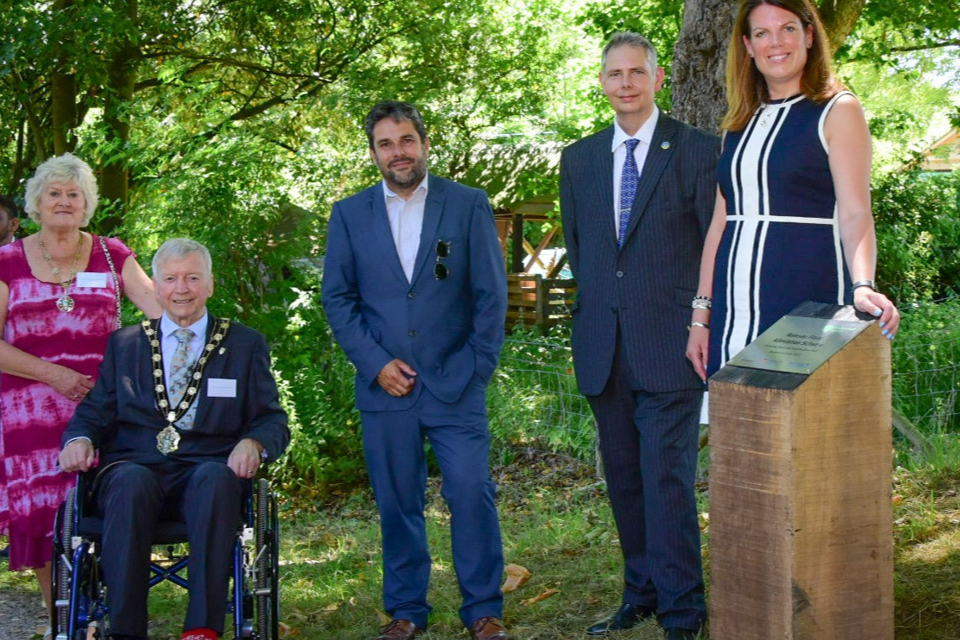 The scheme, which began operation in autumn 2021, reduces flooding from the River Test and surface water. Construction will cost around £9.5m, of which the Environment Agency has contributed around £6.4m through a government grant.

Romsey had a history of flooding in the 1960s, 1995, 2000 and 2001. In the winter of 2013/2014, water flooded the Fishlake Stream and Barge Canal, severely inundating 36 homes and 44 commercial properties with devastating consequences for families and businesses.

A climate emergency carries greater risks. We are seeing more extreme weather with more flooding. Our response must be to do the best we can to protect our communities, make them more resilient, and tackle the causes and consequences of climate change. We can make a difference if we work together, as we have done with this scheme.

The flood control scheme includes a sloped dam structure used to control the flows of Fishlake Creek and earthen embankments to contain excess water within the floodplain. More earth embankments were built on the Causeway to deal with the flood waters, as well as a new bridge and spillway to allow floodwater to drain into the River Test.

The risk of surface water flooding has been reduced through improvements to the existing drainage system, including ditches, culverts and road drainage at the Mainstone and Middlebridge Street junction.

As well as reducing flooding, this scheme provides additional environmental benefits. About 150 meters of new water vole habitat was created and 150 meters of river habitat was improved through vegetation management and improvements to the structure that controls water flow in the Barge Canal. The London Sycamores, some of the oldest in the country, were also carefully preserved during construction.

Members of the local community were consulted during the development of the scheme to ensure they were happy with the design. As a result, the new Causeway Bridge is a carbon-friendly Dutch design made of glass-reinforced plastic and clad in wood to blend in with its scenic surroundings.

The scheme, which took 3.5 years to build, was developed in partnership with Hampshire County Council and Test Valley Borough Council.

This is an important scheme and we were delighted to play our part in helping to protect the people of Romsey. We contributed £1.5 million to the overall cost and worked in partnership with the Environment Agency, the City Council and other local stakeholders to plan, design and build the scheme.

Although there will always be a risk of flooding, residents’ property, businesses, roads and other infrastructure are now much better protected and more resilient thanks to the work that has been done.

In addition to building and maintaining flood defences, the Environment Agency also offers free flood warning services. You can sign up for free flood alerts in minutes at gov.uk at Check the flooding – GOV.UK (www.gov.uk) or call Floodline free on 0345 988 1188.

Photo of flooding, diagram and opening – on request.

In the 2020 Budget, the Government doubled its investment in flood and coastal erosion risk management in England, committing a record £5.2 billion between 2021 and 2027. This long-term commitment will better protect hundreds of thousands of properties, including homes, businesses, schools and hospitals, from the risk of flooding.