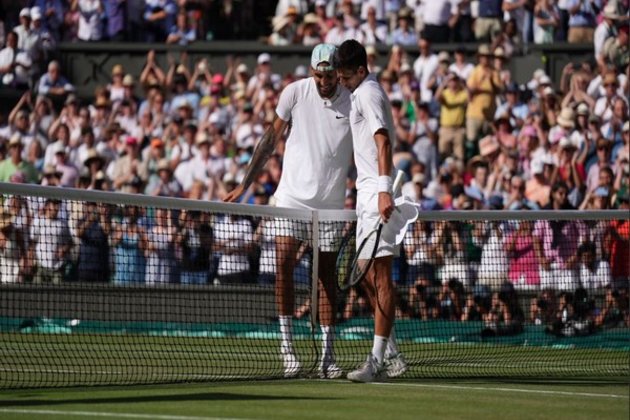 “He’s a bit of a God, I’m not going to lie. I thought I played well. It’s been a great couple of weeks for me. I’m very happy with this result, probably the best of my career, and hopefully one day I’ll be here again , but I don’t know about that,” Kyrgios said at the post-match press conference.

“I felt like he just had so much experience to draw on. He won the tournament four times in a row. When you win tournaments that often, when you’ve been in those situations, it’s unbelievable,” Kyrgios said.

“You can tell yourself you’ve been here before. The confidence and self-belief that only comes with achievement or something that he has achieved many times. I can only imagine how confident he feels every day, especially at Wimbledon, walking around,” he added.

After taking the first set, Kyrgios was unable to break through and claim his first Grand Slam title. However, the Australian was satisfied with his performance.

“I thought I handled myself well today. I came out and did what I had to do tactically to give myself a chance. I thought I served amazing today and he was just able to put so many balls in play. I just it didn’t work out and I’m happy with that,” Kyrgios said.

The Australian won the first set against Novak Djokovic on Sunday before the Serb turned the tables to seal his seventh crown on Center Court.

“My level is here. I feel like when you look at what Novak has done to some of the other opponents, it’s a bad feeling. But I’m here,” Kyrgios said.

“I am not behind the eight at all. I played in a Slam final against one of the greatest of all time and I was right there. [I will take] confidence. It was a hell of an occasion… I came out in the first set looking like I’d played in a lot of finals. I thought I handled the pressure pretty well,” he added. (ANI)

Zara lost its bid to change its name to the owner...

SportTech to expand in Manchester with $52 million in funding