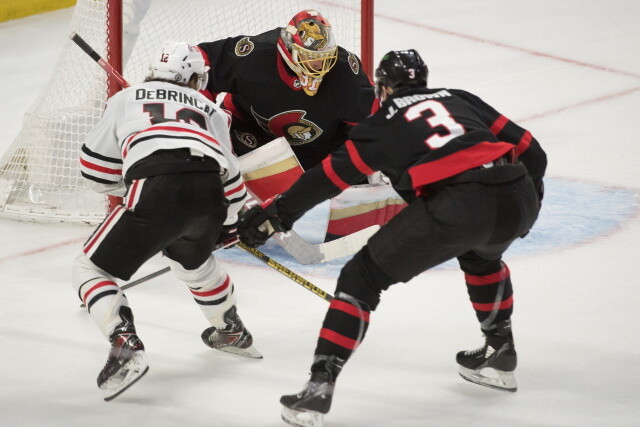 Mark Lazerus: Blackhawks GM Kyle Davidson on the trade: “It was an incredibly difficult decision to trade a player of Alex’s caliber. We believe this move sets the Blackhawks up for future success by providing us with additional flexibility and future talent.”

Ben Pope: GM Davidson: “We feel this move sets the Blackhawks up for future success by giving us additional flexibility and future talent.”

Thoughts from the media

Ben Pope: “For DeBrincat, this is not a good return at all. I understand the Hawks are fully committed to a full rebuild and committing to a plan is a good thing, but it doesn’t equate to DeBrincat’s value.”

John Dietz: Tough. Not enough for Alex DeBrincat. The Blackhawks will receive the 7th and 39th picks this year and a third round pick in 2024. Let me repeat that: BRUTAL.

Ian Mendes: “I hesitate to call this trade a home run for Ottawa. I actually think it’s a grand slam.”

Frank Serravalli: “See a lot of reaction from people impressed with DeBrincat’s return. It’s understandable, I think, and it’s probably even fair to say that CHI thought it could get more if the process started. However, not sure everyone fully understands how many dollars DeBrincat will pay. Not an easy deal to swing.”

Evolves Wild: “Can we just quickly talk about how Chicago signed Seth Jones for $8 x $9.5 million less than a year ago and is now trading their best player”

Anthony Petrielli: “Really like DeBrincat, but I guess the $9 million qualifying offer scared off more than a few teams. It’s fair for Ottawa to take a swing at him though given his age, production, where they are in their development and price.”

Josh Yohe: “Be glad you’re not rooting for the Blackhawks.”

Alex DeBrincat, transferred to OTT, is an elite shooter who takes a lot of penalties and creates a lot of offense with his skating, puck and passing. #GoSensGo pic.twitter.com/etZbuUNsz8

NHL Trade: The Blackhawks Trade Alex DeBrincat to the Senators

Can Labor solve the cost of living crisis?

Which contenders will make trades and which losing teams could make...

Forming a future sales strategy to bridge the gap between buyer...

The untold story of a group of mid-20th century women fighting...