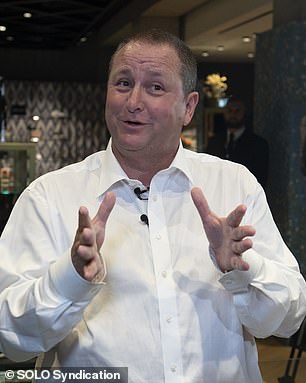 Frasers, the retail group controlled by billionaire Mike Ashley, is in talks to back a £40m fundraising by online electricals retailer AO World last week.

City sources said Frasers was “trying to get involved” by signing a deal or buying shares.

Sources suggested Frasers may have sought a relationship with AO World and could use any stake as leverage. Perhaps it had a long-term goal of taking control of the business, one said.

The Ashley Group owns Studio Retail, which sells electrical goods. It also sells a smaller range through department store House of Fraser. “At one point there was discussion about funding the fundraiser and as recently as this week there was talk of Fraser being involved,” one source said.

Frasers has acquired shares in a number of companies, most recently increasing its stake in Hugo Boss to around £750m.

Ashley acquired House of Fraser after initially taking an 11 per cent stake in 2014. Four years later, he seized control of the business shortly after offering it an “emergency” cash injection when the business was close to collapse.

He also amassed an almost 30 per cent stake in Debenhams before trying to take the reins. But that strategy backfired when the department store chain collapsed, costing his company around £150m. Ashley is described as someone who “likes to park his tanks on other people’s lawns.”

AO World founder and chief executive John Roberts launched a surprise fundraiser on Thursday to shore up its finances after reports that credit insurers had dropped cover. The leak sent the stock price plummeting.

Roberts said City investors had given the company a “strong endorsement”.

He said the fundraising was a “sensible part of financial management” given the general economic uncertainty.

The AO declined to comment. Frasers did not respond in time for publication. AO World shares are trading at 43p – the same as the offer price – and down 28 per cent for the week.

How self-service business intelligence is changing the retail industry

Karen Brady: Once the frenzy of England’s Euro win wears off,...