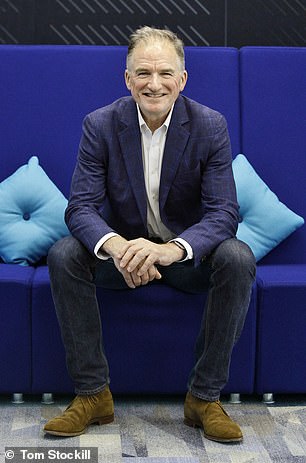 John Lewis looks distressed as he describes the predicament Capita found himself in when he joined five years ago. Lewis has been dubbed the “Turnaround King” to clean up the bloated government contractor, which he says has spent too long buying other firms indiscriminately and piling up debt while continuing to pay hefty dividends to shareholders.

He was most shocked by the losses brought on by years of neglect and underinvestment.

“We didn’t even have cyber security on some of our PCs,” says Lewis, 60, wincing at the memory of his creaky infrastructure.

The public may also cringe: Capita’s work includes everything from collecting the BBC license fee and congestion charges in London to army recruitment.

Many in both the City and Whitehall at the time were convinced that Capita was a lost cause – as rival Carillion would later become. Lewis, then embarking on his fourth reversal and arriving after a series of earnings warnings, says he did not fully appreciate the scale of the task.

Now he is much more upbeat in his first interview since completing a “very, very difficult” restructuring last year. His sense of relief is palpable after admitting that the result “could have been completely different”.

“Let’s remember that this is a business that is an integral part of the fabric of the UK,” says the Welshman. “It may sound like a grandiose statement, but we interact with 50% of the population of this country in one way or another almost every week.

“Together, as a board of directors and a management team, we saved the company so we can continue to do this and do it better than ever before.”

Since arriving in late 2017, he has sold large chunks of the business and sought to position Capita as a high-tech firm. Move away from core products like traditional call centers and into artificial intelligence and chatbot startups for companies like O2.

In the process, he cut Capita’s headcount from 73,000 to 52,000 and reduced debt to more manageable levels.

But the real transformation for him is changing the culture in the group. This is partly due to the creation of a consulting division, which he now compares to the likes of Accenture.

It also overhauled the way Capita works with customers. He says, “We used to decide which one [contracts we wanted to work on] then bet for them.’

The group “will then fulfill the contract and not one iota more.”

“We didn’t manage our client relationships in the same way that other businesses or the Big Four professional services firms did, there were no partners who owned those relationships.” He insists things have shifted and he wonders why Capita is still being compared to the likes of Serco and Mitie rather than rivals Deloitte Digital, Accenture and Infosys.

The reality, it seems, is that her reputation — and, unfortunately, the crude nickname “Crapita” — may take longer to change.

Have you thought about renaming and rebranding the group? Yes, he says. But this was quickly dismissed when their research showed that customers had no problem with it.

“When we started this transformation five years ago, if you did a Google search for ‘Crapita’ you would get quite a few hits. Today, you get a lot fewer hits,” he offers.

But he adds: “The way to solve this problem is not through a superficial change of the company’s name. It’s just putting lipstick on it.’ For all Lewis’s enthusiasm, the share price remains stubbornly low at 25p. The group is worth around £430m – a fraction of its previous value and well below the 97p at the time of the £700m emergency rights issue in 2018 that Lewis launched to stem losses.

He simply replies that it has been a “very challenging” time for investors.

But he lists the things he still wants to do: grow the group’s business units in line with the markets they serve and wipe out Capita’s debt. “At that point you can pause and say, ‘Isn’t it time to get off and do something else?’ But we are not there yet.’

When do you think you will be? “Well, I can’t put a time frame on all of that.”

He is optimistic that his shares will reach their pre-issue value in the next year or two. Whether the market will convince is another matter.

Lewis – perhaps unsurprisingly for someone rejuvenating businesses as a consultant – has a habit of using the jargon many bosses use.

He repeats the word “transformation” and admits that it is most likely to be found when he utters the phrase “Are we delighting this customer?” around the office.

This, and his boundless enthusiasm, may be partly explained by the 20 years he spent in America.

A geologist by training, he spent two decades at US oil services giant Halliburton. His tenure there came to an abrupt end when he was passed over for the top job – the lowest point of his career, he says. “I’ve been in the succession plan there for many years,” he says.

“There were six of us, then five, then three, then two. I got to two, I didn’t get to one, and I dedicated years of my life to believing that at some point I would be the CEO of this company.

“When you have that prospect dangling in front of you, you’re pretty much giving your life to this company.”

Now he seems to have found peace at home, and also – at least relatively speaking – at work.

Brought up in South Wales, Lewis went to a local club where he met his wife of 37 years. He arrived at Capita after a short stint at another oil services group, Amec Foster Wheeler.

Now his family lives in a settlement in the same village where he grew up, and where he spends a lot of his free time gardening.

“I run into people I went to nursery school with, I run into people from my comprehensive school and it’s nice to have those connections – they don’t know what I do. It’s actually a kind of grounding.

“I’m really back home and I’m loving it.”

How to convince your organization to invest in paid software

Heat waves are melting alpine glaciers at the fastest rate since...

Moonpig goes back to basics and prioritizes greeting cards

Monsoon floods in India kill at least 40 people as bridges...