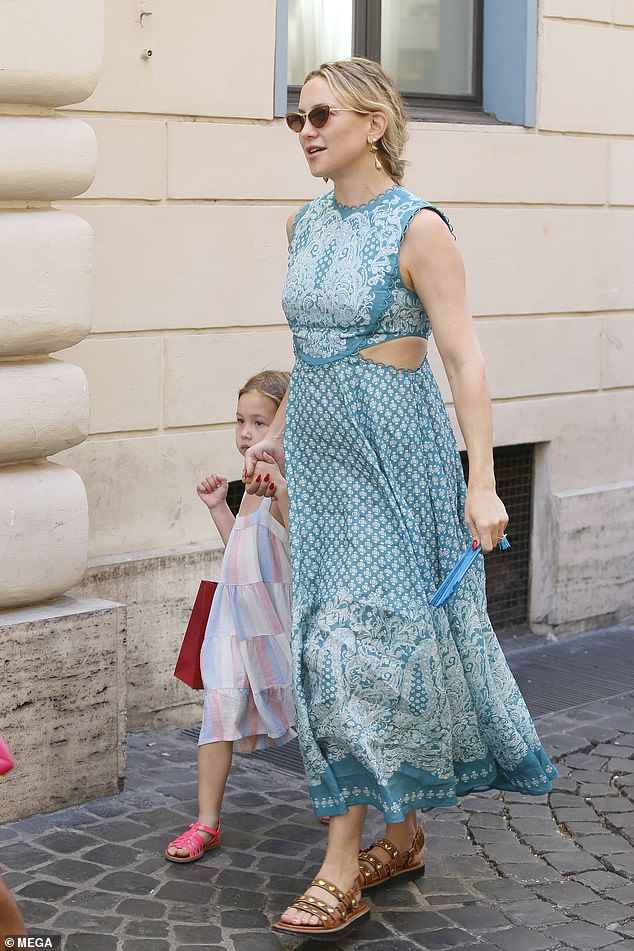 Kate Hudson exudes summer chic in a cut-out maxi dress as she enjoys an outing with fiance Danny Fujikawa and daughter Rani Rose, 3, in Rome

She’s been enjoying her Italian holiday this week, hopping around town between Rome and Positano.

I Kate Hudson looked her usual chic self as she enjoyed a family day of shopping in Rome on Saturday, walking arm-in-arm with her three-year-old daughter Rani Rose and fiance Danny Fujikawa.

For the walk, the 43-year-old actress wore a blue maxi dress with a white pattern and cutouts on the torso.

Holiday: Kate Hudson, 43, went summer chic in a cut-out maxi dress on Saturday as she enjoyed an outing with daughter Rani Rose in Rome

Adding a pair of brown gladiator sandals, Kate shielded her eyes from the sun with metallic cat-eye sunglasses.

Her blonde tresses were braided away from her face in a tousled braid, and the beauty chose a natural make-up palette.

Clutching a fan, she held her daughter Rani, who looked adorable in a pastel ruffled dress and hot pink sandals. 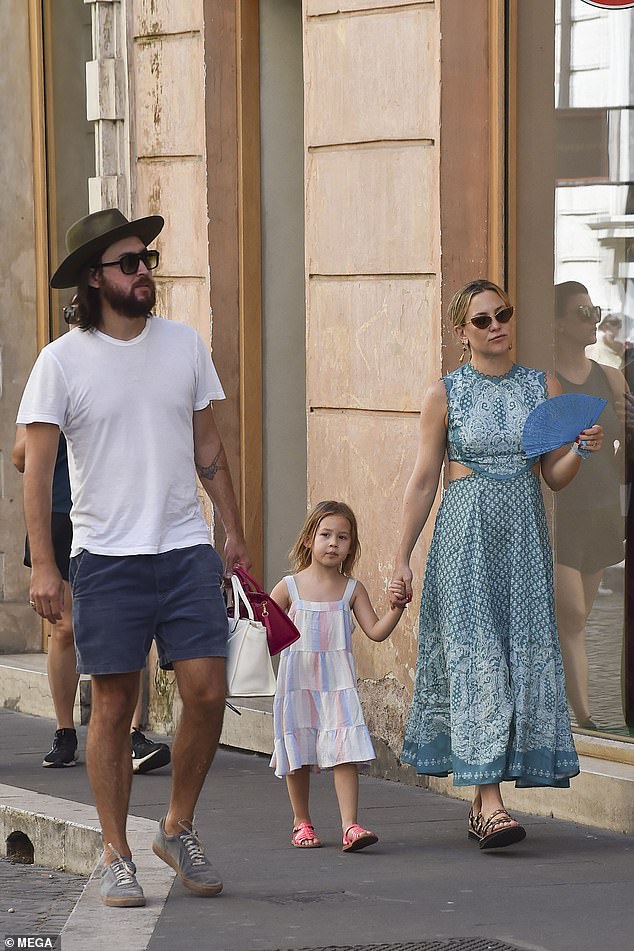 Family: Kate was also joined by her fiance Danny Fujikawa, who was tasked with carrying her handbags while they went shopping 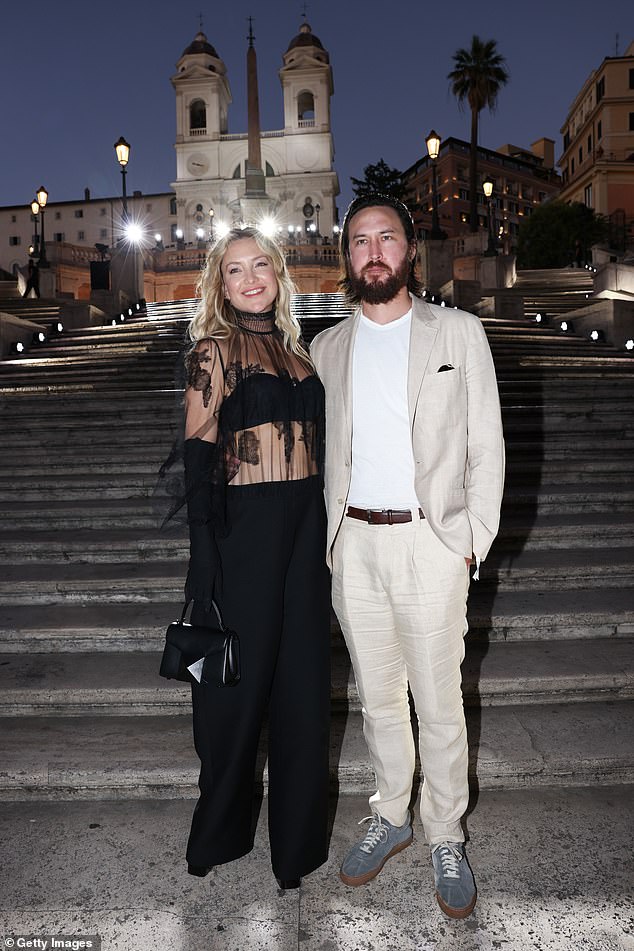 Fashion Week: The Almost Famous actress headed to Rome to celebrate Haute-Couture Fashion Week as she and Jason were pictured looking chic at Valentino’s city show on Friday

Kate’s fiance Danny was left with the task of carrying her bags as he carried a white and red handbag during the outing.

Kate is also mother to Bingham Hone Bellamy, 11, who she shares with Muse musician Matt Bellamy, and Ryder Robinson, 18, who she met in 2004 with Chris Robinson of the rock band The Black Crowe. 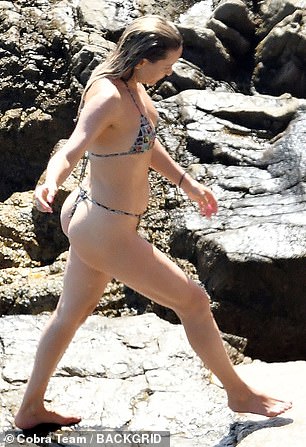 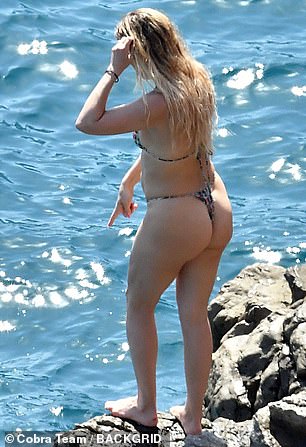 Making a splash: Squeezing in some holiday time, she headed out on a yacht earlier this week – when she was pictured in Positano with her fiance and mum Goldie Hawn 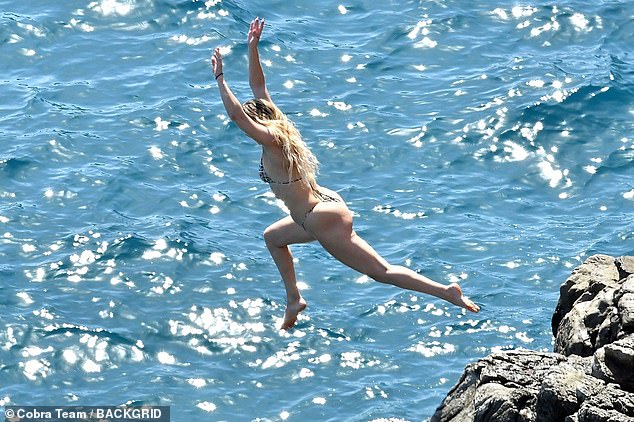 Leap of Faith: She raised her arms in the air as she threw herself off the rocks into the warm blue water below

The Almost Famous actress headed to Rome to celebrate Haute Couture Week as she and Jason were photographed looking chic at the Valentino show in the city on Friday.

But with time off, she also hit the yacht earlier this week – when she was photographed in Positano with her fiance and mother Goldie Hawn.

Basking in the sun, Kate showed off her svelte figure in a patterned bikini as she took a dip in the sea from a boat. 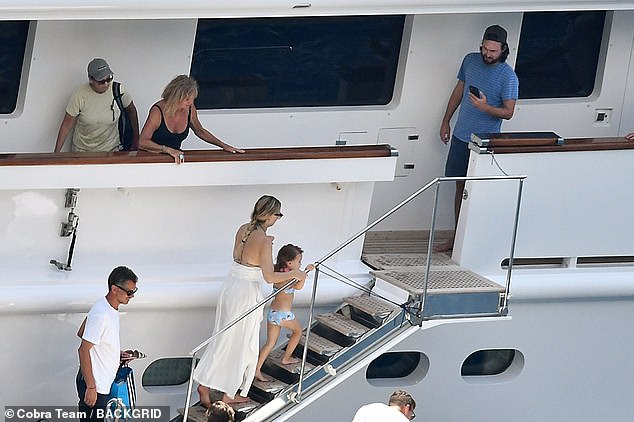 Back on the boat: Goldie and Kate’s fiance Danny were seen on the deck of the boat looking over the edge as other members of their group made their way on board 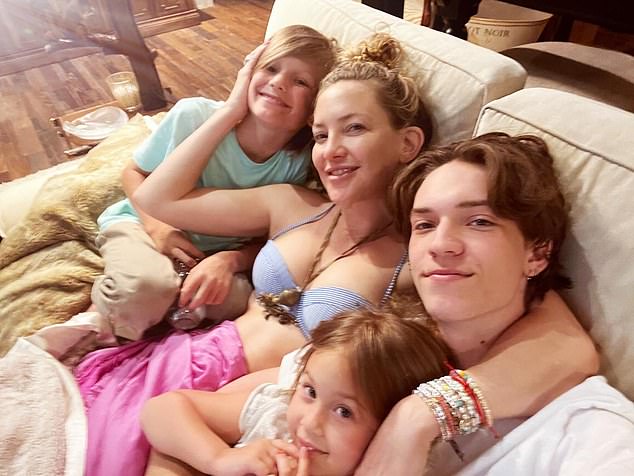 We can provide financial support in the event of a power...