Newsheadlinesuk.com
Home World In a video message, Zelensky thanks the outgoing Boris for his support 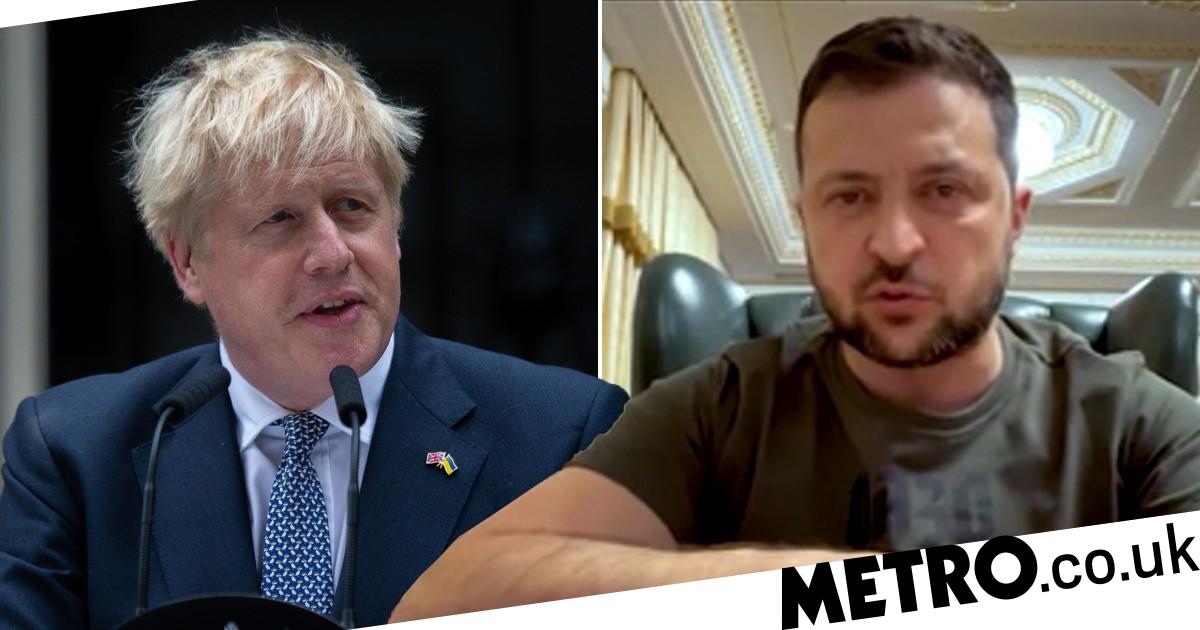 Vladimir Zelensky thanked Boris Johnson for supporting his country “from the first day of Russian terror.”

Ukraine’s president sent the message to Mr Johnson in a late-night video message on Thursday, hours after the British prime minister finally agreed to step down.

Mr Zielenski said the news of Mr Johnson’s decision to step down was “a major topic (of conversation) in our country”.

He said Britain played a leading global role “in defending freedoms” and “the leadership and charisma of a head of state is always of paramount importance”.

Listing the weapons and “many other things” that Britain has supplied to Ukraine since Russia invaded in February, Mr Zelensky thanked Mr Johnson for “significant political support, tough sanctions against Russia and financial assistance” to Ukraine.

“Britain’s role in protecting freedom is truly global,” he added.

“No matter what happens in the government offices in London, UK support for Ukraine should not change.”

The Ukrainian president said as he thanked Mr Johnson earlier in the day they talked on the phonethe Tory leader assured that Britain would remain steadfast in its support for the war-torn nation.

Mr Johnson visited Ukraine several times during his premiership and after the Russian invasion.

In April, he surprised the world by making a secret trip to Kyiv to meet with Mr Zelensky at a time when the capital was still a big target for Russian troops.

Downing Street said that the visit was “a manifestation of solidarity” with Ukraine.

He returned to the capital again last month, visiting Mr. Zelensky on June 17 to discuss a new military training program.

Mr Johnson announced his resignation after more than 50 ministers left the government.

The move marked the end of a chaotic 72 hours in British politics, which came after three tumultuous years in Downing Street during which Mr Johnson faced numerous scandals.

But the 58-year-old was finally hurt by how he handled the Chris Pincher scandal.

Downing Street confirmed on Monday that Mr Johnson was aware of concerns about Mr Pincher’s behavior when he appointed him as deputy chief executive.

His spokesman later admitted that he was aware of the “speculation” surrounding the deputy, but “there was no official complaint at the time.”

The admission marked the beginning of the end for Mr Johnson, with a series of high-profile resignations from his government on Tuesday and Wednesday.

U his resignation speech Yesterday, Mr Johnson made many references to the conflict in Ukraine and Britain’s role in “leading the West to counter Putin’s aggression in Ukraine”.


Key events that led to the resignation of Boris Johnson

The news that Boris Johnson will step down as Prime Minister comes after a turbulent few days in British politics.

After a vote of no confidence in June, the government’s decision on the Chris Pincher scandal marked the end of Mr Johnson’s tenure in office.

Here’s a rundown of the key events that got us here.

Downing Street confirmed that Mr Johnson was aware of concerns about Mr Pincher’s behavior when he appointed him as deputy chief executive. His spokesman later admitted that he was aware of the “speculation” surrounding the deputy, but “there was no official complaint at the time.”