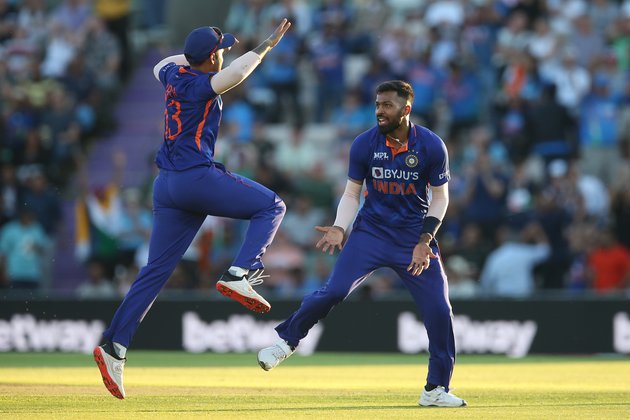 Hardik smashed a 33-ball 51 to take India to 198/8 in the first innings. He later scalped four wickets and restricted England to 148. Apart from him, debutant Arshdeep Singh and spinner Yuzvendra Chahal scalped two wickets each.

Chasing 199, England started on a pathetic note as captain Jos Buttler was run out by Bhuvneshwar Kumar on the fifth ball of the innings with just one try on the board. David Malan joined hands with opener Jason Roy at the crease and tried to anchor the innings.

Their duo broke through in the 5th over when Hardik dismissed Malan, who departed after scoring 21 runs in 14 balls. Liam Livingstone was then dismissed in the same over, leaving the hosts struggling at 29/3.

Harry Brooke came to the crease with Jason Roy but India got another breakthrough in the 7th over when the latter was caught by Harshal Patel off a Hardik delivery. Brook was joined by Moeen Ali, who gave England some momentum.

The duo then put on a 60-run partnership to take England to 94/4 before Chahal struck two strikes to send both batsmen back into debt in the 13th over, leaving England 100/6.

Sam Curran and Chris Jordan came to the crease but couldn’t do much as the former was caught by Dinesh Karthik off Hardik’s delivery in the 14th over. Tymal Mills joined hands with Jordan and was caught and bowled by Harshal Patel after scoring 7 runs.

Rhys Topley came to the crease after that but couldn’t last long as he fell prey to Arshdeep’s spells and departed after scoring 9 runs for his team. Matthew Parkinson teamed up with Jordan and tried to build a partnership.

England’s chase ended after Parkinson was caught by Deepak Hooda off an Arshdeep delivery to ensure the visitors a 50-run win.

SHARE OF THE WEEK: Ocado Retail in focus, results imminent

A long-awaited report into the mass grooming of children in Telford...