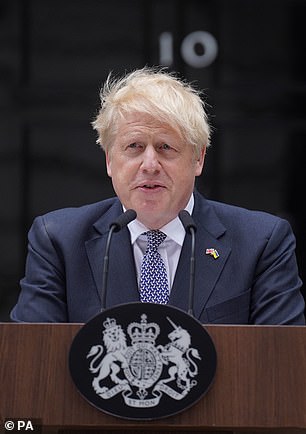 Gone but not forgotten: Boris Johnson

Political upheaval goes hand in hand with economic work – and that’s what the new government, once in place, will have to deal with. This should help the country get out of recession faster than it is currently managing to do.

Don’t believe the scary headlines that claim the economy is in some sort of post-pandemic meltdown. It is not so. In fact, it grew more rapidly between the last quarter of 2019 and the first quarter of this year than France, Italy, Japan and Germany – although more slowly than the US and Canada.

But there are serious problems, and there are at least four reasons to suspect that the new government could better deal with them. There’s also one reason to think things could get worse in the short term. So you could say it’s a case of four weddings and one funeral.

The nuptial one is that whoever forms the government and whoever is chancellor, there will be a reassessment of the UK economy and the rationale for investing here. Don’t expect a sudden rise in the pound or UK stocks, although both are undervalued.

There are much bigger forces at work here, particularly the flight to safe havens that are pushing up the dollar, and the question mark in global equities given the possibility of a recession.

But there was a modest rise in sterling against the dollar when Boris Johnson announced he was leaving, and a sharper rise against the euro. Given that inflation is partly driven by the cost of imports, any rise in the pound is very welcome.

Changes in fiscal policy will follow. One of the reasons for Risha Sunak’s resignation was his disagreement with Boris Johnson about the need to raise taxes. Although we do not know who will become prime minister or whether Nadhim Zahavi will remain chancellor, this is an opportunity to reconsider.

Taxation is now projected to rise to its highest level as a share of GDP since 1948. Of course, there are costs to keep the economy going during the pandemic, and we seem to be running a budget deficit of about 4 percent of GDP. this financial year. (Last year it was 6.1 percent, and the year before – 14.5 percent).

But while it must continue to decline, the pace at which we reduce the deficit is a real debate. I worry that we are doing it too soon.

This leads to the third wedding, which means that the new chancellor will also be dealing with the details of taxation. Here Rishi Sunak seems to have lost his point.

Is it really a good idea to increase corporate tax from 19 to 25 percent? Sure, you could push it to 20 percent. That’s a nice round number and you can oblige the government not to increase it in this or the next parliament. You might even get more income from 20 percent than 25 percent, given the way companies behave. Has the issue of National Insurance contributions been well addressed? I’m afraid not.

The bottom line here is that there are ways to adjust the tax system to maintain current levels of income without angering people and businesses who are hoarding money.

Jean-Baptiste Colbert, Louis XIV’s finance minister, noted that “the art of taxation consists in plucking the goose in such a way as to obtain the greatest number of feathers with the least hiss.”

HMRC needs feathers, but the backbenches hear a lot of hissing from their constituents. The new chancellor will have to find ways to appease them.

And so to wedding number four. A famous saying goes that retail is all about the details: what makes stores and supermarkets successful is the attention they pay to getting the right products at the right price and displaying them correctly.

Well, the government is also about the details. Things that have worked well over the past couple of years, such as vaccine procurement and distribution, have been the result of careful, intensive, and precise planning. The things that didn’t work well were… well, let’s not get into that. The next government will make mistakes, but it will be less chaotic, and that is very important.

A funeral? It’s very simple. Economics is driven by certainty as much as numbers. We need consumer confidence to keep spending. For companies to continue to hire and invest, we need confidence. It means confidence in whoever is running the show. I’m worried it’s going to drag on. The new leader must assemble a competent Cabinet, and it must be established quickly.

A New York court has granted an appeal against Harvey Weinstein

Nikki Haley accuses Sunny Hostine of ‘racism’ for attacking her for...

Riza Ahmed’s brilliant answer to Where are you really from? ...