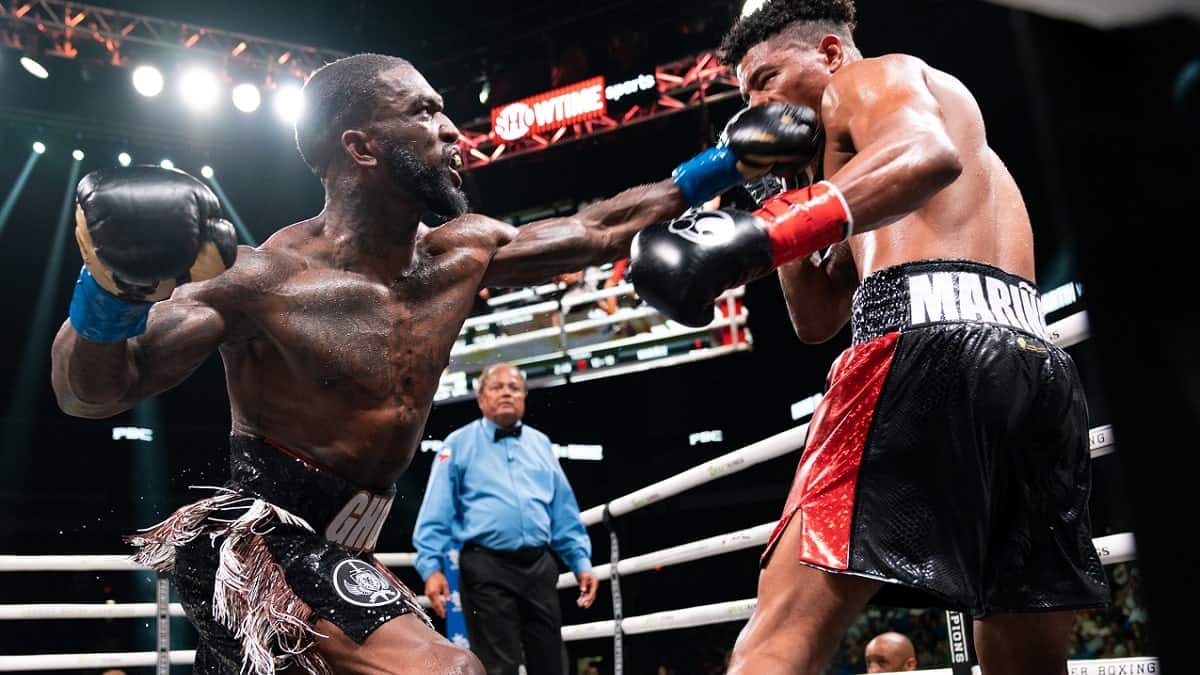 Extending his record to 16-0 with 12 knockouts, Martin displayed the full range of skills that have made him one of the most talked about rookies in the 135-pound division.

He inflicted methodical destruction en route to stopping Jackson Mariñez (19-3, 7 KOs) in the 10th and final round.

After a tentative first two rounds, Martin, who was coached by Derrick James, began to use his high foot speed to position himself and land a deadly left hand to the head and body.

“I was ready to go the distance whether I got knocked out or not,” Martin said. “Me and Derrick James have been working hard in the gym.

“It was just a matter of me being patient and not worrying.”

Mariñez used his size advantage in the early rounds to keep Martin honest, finding success by landing counter rights over the top of Martin’s guard.

“I felt great,” Mariñez said. “I was very comfortable in the ring. It would have been a completely different result if I had had more than eight days to prepare.”

Marínez, who came on as a substitute to face Martin, couldn’t put together effective combinations and relied too often on counterattacks.

Martin slowly broke down Mariñez with a consistent body attack, landing 53 shots throughout the action.

“I’m just an accurate shot,” Martin said. “We needed to really stay on the outside of the hook. I was doubling two and trying to go inside with a hook.”

After a close first half of the fight, Martin began to pull away in the final rounds and finally broke through. He hurt Mariñez at the end of the ninth round.

He landed a series of vicious lefts that floored Mariñez before the next attack left Mariñez on the mat in a neutral corner.

“The knockdown in the ninth round changed the tone of the fight,” said Mariñez. “Maybe I could have been more careful.

“These things happen in boxing and you just have to be ready to throw punches. He had power and so did I.’

Mariñez was able to get back to his feet and survive the round, but Martin wasted little time resuming his attack in round 10. He increased the tempo from the start and threw punches at Mariñez, who was pinned against the ropes.

Mariñez hit the canvas again and referee Rafael Ramos stepped in to end the fight 30 seconds into the round.

“I was on top of him when I hurt him. I was hungry, he was in deep water, so I had to get him out of there,” Martin said.

“I’m here with the best guys in the lightweight division. Sit me down at the table with them when I’m ready.

“I’ll sit down with my team and hopefully get something big. In the end, we won them all.”

Ellis dropped Marouf twice in the first two minutes of the frame before the ensuing attack forced referee Ellis Johnson to stop the action at 2:17 of the round.

TGB Promotions promoted the event. Martin vs. Mariñez fight in association with Man Down Promotions.

Firefighters get high-tech help from robotics

17 of the best snaps of British life from Great British...

Brady Singer shined in the Victoria de Royals game at the...

Bryce Young will lead Alabama, the SEC this fall