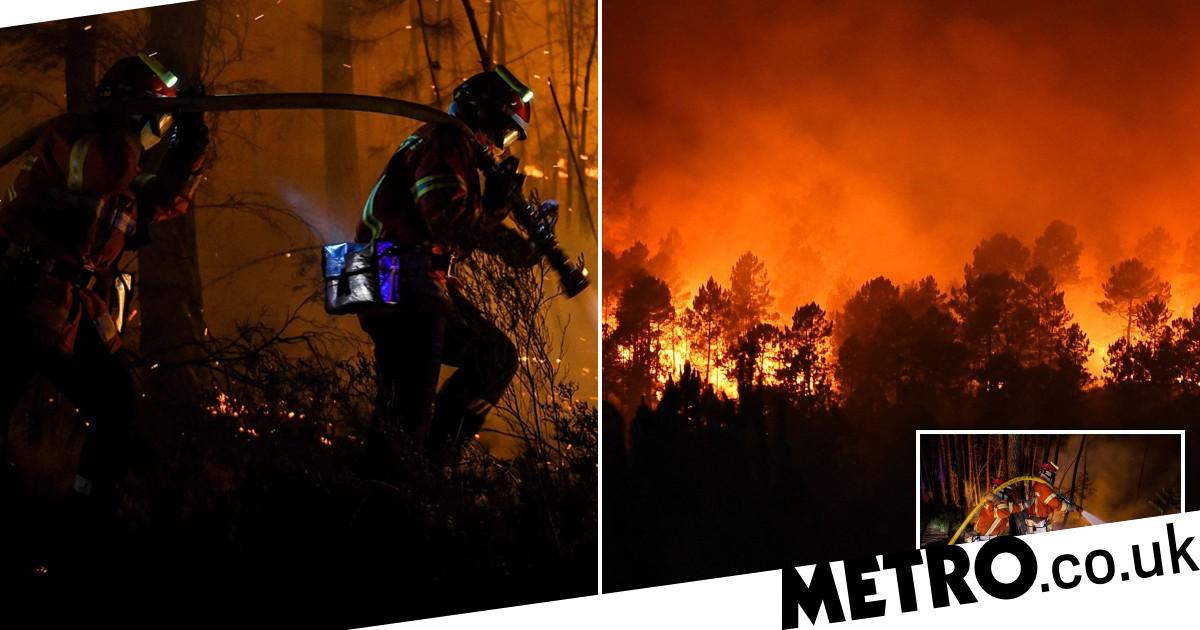 More than 900 firefighters have been deployed to bring under control a massive forest fire in southern France.

The fire in the Gard region in the south of the country started late on Thursday, burning 1,500 acres in the first 24 hours.

The inferno, described by first responders as a “mega-fire”, was first reported near the village of Bardezac and forced people to evacuate nearby Besegues and other communities.

The local prefect’s office said about 100 people had to stay in holiday homes and restaurants in the area, which is about 55 miles north of Montpellier and on the Mediterranean coast.

“I’m looking for rooms for people, and all the vacation homes are doing the same thing,” Regine Marchand, manager of a restaurant in nearby Ajaque, said Thursday night.

“We prepared pasta for them, people left quickly without bringing anything, but they keep a cheerful mood, a good atmosphere.”

With the support of 12 planes and two water-dropping helicopters from the sky, firefighters turned on backfires to slow the fire.

By yesterday, the homes were no longer in danger, with only a garage and a small shed damaged, but there were warnings that the fire could be brought under control by the weekend.

“This fire is still far from extinguished. There are fronts in hard-to-reach areas that we haven’t touched that are advancing freely,” said Eric Agrinier, a senior member of the fire department.

“It will be a feat of resilience,” he added later, warning that the fire may not be contained until Sunday due to adverse weather conditions.

South-eastern France has been hit by drought this year, increasing the risk of fires.

During unseasonable heat last month, about 600 hectares were burned by a fire started by shelling of an army artillery range near the Mediterranean port city of Marseille.

On Thursday, firefighters in the Bouches-du-Rhône region were called to up to 35 flare-ups, many of them near populated areas.

Four houses were destroyed near the southern city of Arles, and 250 firefighters were called to tackle a forest fire in Saint-Mitre-les-Remparts.

Although several other fires broke out in southern France on Thursday, most of them were extinguished before nightfall.

The fire department said thousands of acres of wooded land were at risk as winds gusting up to 50 miles per hour fanned flames through dead trees.

The Dodgers race is overshadowed by the history of the American...

Oklahoma executes Benjamin Cole for killing his infant daughter in 2002,...

The pound is steady as markets expect the Bank of England...