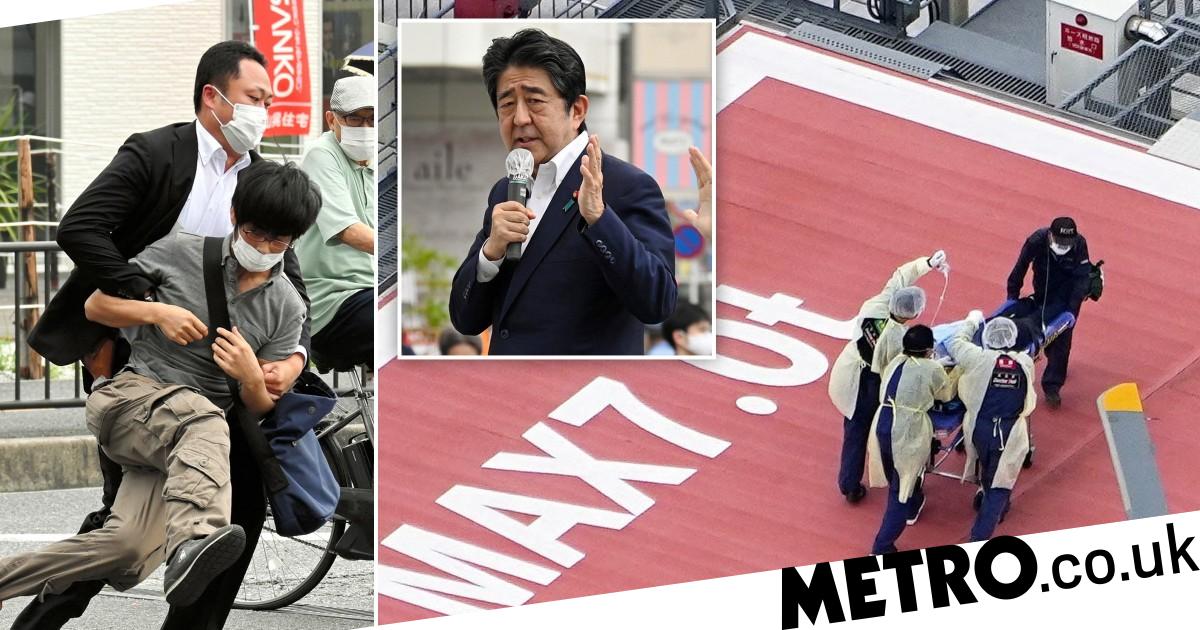 Former Japanese Prime Minister Shinzo Abe was shot dead during a campaign speech and is “showing no signs of life.”

He was photographed bleeding and clutching his chest as he lay on the ground in the western city of Nara today.

Public broadcaster NHK said he appeared to be in cardiac arrest and that he was showing no vital signs.

Local reports said he was shot twice in the back, with wounds to the left side of his chest and possibly his neck.

Firefighter Makoto Morimoto said Abe was not breathing and that his heart had stopped while being transported to the hospital.

Police said a 41-year-old man suspected of committing the assault with a shotgun has been arrested.

He was named Tetsuya Yamagami and is believed to be from the city of Nara.

The suspect is believed to have been armed with a homemade firearm and witnesses say he was immediately tackled to the ground by security guards.

Abe, 67, was airlifted to hospital and was initially conscious and alert, but his condition appears to have deteriorated.

NHK showed video of Abe giving a campaign speech outside the station when two gunshots rang out around 11:30 a.m. local time.

The view was then briefly obscured, and then security personnel rushed at the man who was lying on the ground.

In another video, a plume of smoke could be seen behind Abe, followed by a loud crash and a gasping crowd.

“At first I thought it was firecrackers,” one bystander told NHK. Political violence is rare in Japan, a country with strict rules on the purchase of weapons.

In 2007, a Nagasaki major was shot dead by a Yakuza gangster. The leader of the Socialist Party of Japan was assassinated during a speech in 1960 by a right-wing youth with a samurai short sword.

Abe served two terms as Japan’s prime minister before stepping down in 2020 due to ill health.

But he still dominates the ruling Liberal Democratic Party (LDP), controlling one of its main factions.

His protégé, Prime Minister Fumio Kishida, is running in Sunday’s upper house election, hoping, analysts say, to step out of Abe’s shadow and determine his premiership.

Kishida suspended his election campaign after the Abe shooting and was returning to Tokyo where he was scheduled to address the media.

The government has said it has no plans to postpone the election, but most major parties have suspended their campaigns.

What’s next for Miami Dolphins Tua Tagovailoa after being ruled out...

when will it start and what to expect