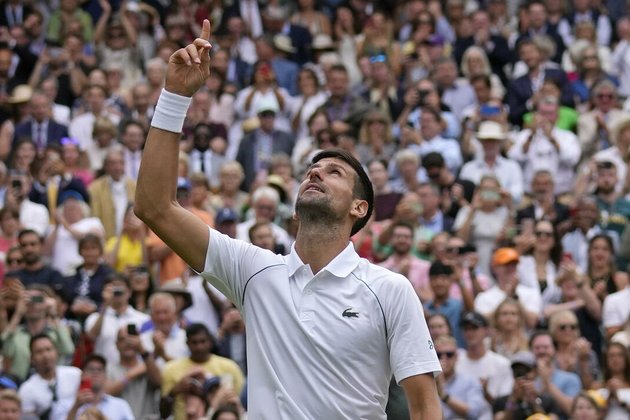 Novak Djokovic recovered from a shaky start to beat Cameron Nori in four sets at Wimbledon on Friday to reach a record 32nd Grand Slam final, where he will play Nick Kyrgios.

The Serbian top seed was broken three times in the first set but turned the tables on his British opponent to win 2-6, 6-3, 6-2, 6-4 in the sunshine on Center Court to reach his eighth final to the All England Club.

The six-time Wimbledon champion’s new mark of 32 major finals is a record for men’s tennis.

That puts him one ahead of Roger Federer and two ahead of Rafael Nadal, who withdrew from the tournament on Thursday due to injury.

“He was the better player in the first set,” Djokovic said.

“Slam semifinals, I’ve played a lot of them, but there’s always pressure from inside and outside.”

Djokovic and Norry both dropped serve at the first time of asking and the crowd offered vocal support for the ninth seed.

But while Nori quickly found his rhythm, Djokovic – save for a stunning tweener – was strangely out of sorts, dropping his serve twice more in a set that Nori closed out with an ace.

The Serbian completed just 55 percent of his first serves and committed 12 unforced errors against his left-handed opponent in the opening set.

Djokovic looked more composed early in the second set, finding more rhythm on his serve and reducing his errors.

A single break for the 35-year-old in the eighth game changed the color of the match, going 5-3 up.

It was part of an eight-game streak from nine for the 35-year-old, who took the second set and then led 5-1 in the third, giving Nora a mountain to climb.

Djokovic broke again early in the fourth set and didn’t miss a single break point as he galloped to victory.

Djokovic is now on a 27-match winning streak at Wimbledon as he bids to match Pete Sampras with seven titles at the All England Club – just one shy of Federer’s men’s record.

If he wins the title, he will have 21 Grand Slam titles, surpassing Federer and just one behind Nadal in the race for the all-time greatest.

Djokovic already knows he will play 40th-ranked Kyrgios after Nadal pulled out of the tournament ahead of his semi-final against the Australian with an abdominal injury.

Kyrgios, 27, will be playing in his first Grand Slam final but has a 2-0 win over Djokovic.

“The job is not done,” said Djokovic as he chases his fourth straight Wimbledon title.

“One thing is for sure, there will be a lot of emotional fireworks from both sides.

“He plays loose, has a big game and a lot of power in his shots. I’ve never won a set against him – hopefully it can be different this time. He has nothing to lose.”

Buckingham Palace has confirmed the May 2023 coronation date for King...

How to explain to the House of the Dragon over coffee...