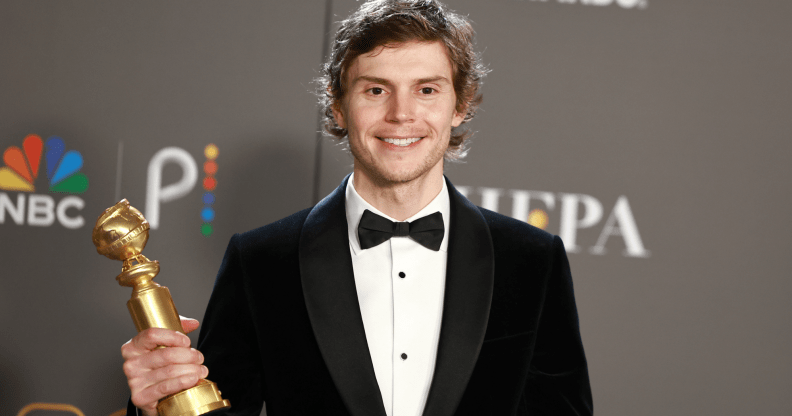 Evan Peters won Best Actor in a Limited Series for his portrayal of Jeffrey Dahmer at the Golden Globes. (Getty/Matt Winkelmeyer)

Peters won Best Actor in a Limited Series at the Golden Globes for his portrayal of a notorious serial killer in the hit Netflix series Dahmer – Monster: The Story of Jeffrey Dahmer.

Shirley Hughes, who used to condemned the Netflix drama for glorifying the murders, said Peter’s victory “continues the obsession” with Dahmer’s crimes.

Talking to TMZ, Hughes said: “It’s unfortunate that people can take our tragedy and make money. The victims did not see a cent. We experience these emotions every day.”

“There are many sick people all over the world,” she added. “And people who win acting roles without playing killers perpetuate the obsession, and it makes sick people thrive on fame.”

Tony Hughes, son of Shirley, was a 31-year-old deaf gay man who did not speak who communicated using lip reading, written notes, and sign language.

The focus was on the story of Tony’s life and tragic murder Damera the sixth episode, “Silenced,” which viewers unanimously declared the “most heartbreaking” episode of the entire series.

Evan Peters used his Golden Globes acceptance speech to thank his friends, family, show creator Ryan Murphy for his “brilliant vision” and everyone who watched the series.

“I want to thank everyone who watched this show,” he said. “It was hard to do, hard to watch. But I sincerely hope that something good will come out of it.”

Hughes criticized the actor for not mentioning the victims of Dahmer’s horrific crimes in his speech.

“Evan should have used his acceptance speech to remember the families still suffering from Dahmer’s crimes, or to say that Hollywood needs to stop telling stories about killers and glorifying them,” she said.

Damer has caused widespread controversy since it hit Netflix in September 2022, and the families of its victims said the show “re-traumatized” them.

The series follows the crimes of a Milwaukee serial killer and the aftermath — between 1978 and 1991, Dahmer is known to have killed 17 young men and boys.

Dahmer was sentenced to 16 life terms in 1992, but was murdered by a fellow inmate just two years into serving his sentence.

Since the release Damer became Netflix the second most watched English-language TV series of all time.

The deadly effects of Belfast’s drug problem and why it continues...

A smiling Olivia Wilde brushes off recent controversy as she continues...

Bette Lewis on the queer domestic violence novel The Descent of...

BAE Systems to hire 1,000 engineers as Tempest fighter takes off