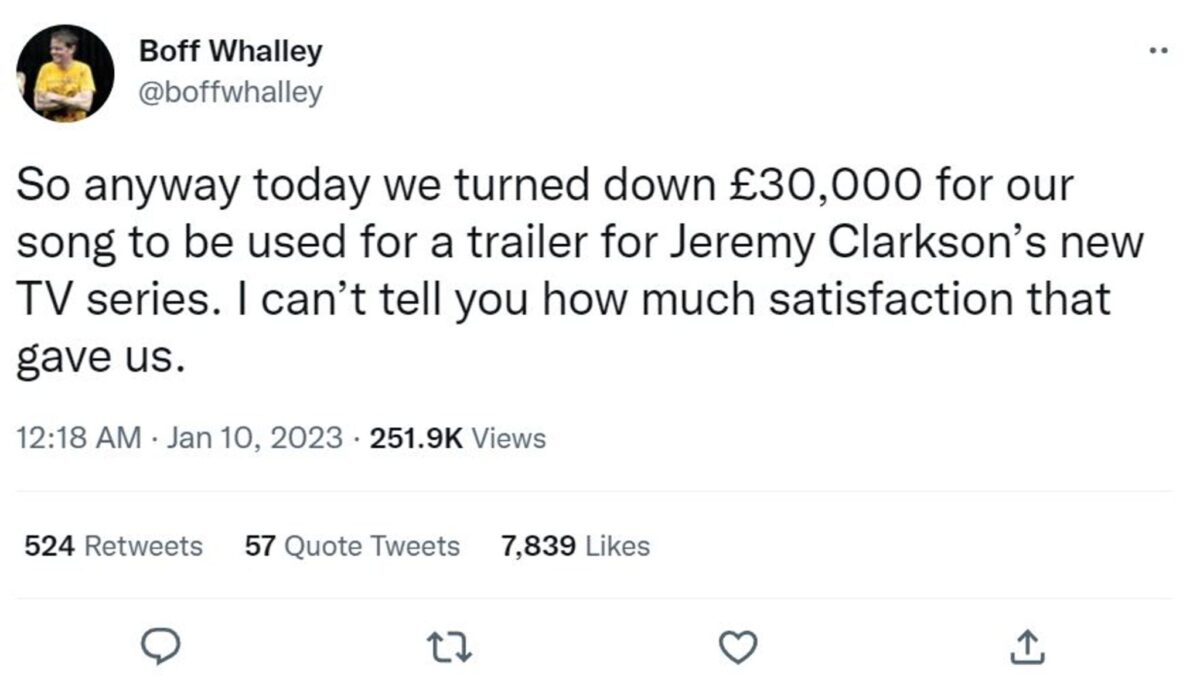 Jeremy Clarkson allegedly turned down £30,000 offer for a song in his new TV series – with one hit miracles Chumbawamba.

Lead guitarist for cult band Heroes Alan Mark “Boff” Wally yesterday told fans on social media that the band had allegedly been approached for permission to make their song is used.

However, the 62-year-old claims the band turned down the request despite an apparent offer of £30,000 for the song to be used on trailer.

Wally, from Burnley, Lancashire, described his “delight” at denying Clarkson on Twitter yesterday.

He said: “So today we turned down £30,000 for the use of our song in the trailer for Jeremy Clarkson’s new TV series. I can’t tell you how much fun it was us.”

Wally’s tweet attracted more than 6,500 likes and more than 500 retweets, with many social media users flooding the comments section to praise the musician’s decision.

Yasmin A. Choudhury said, “We love you so much. Thank you.”

Emma Flowers commented: “It’s a life-changing sum for us songwriters, but I’d do the same. Thank you very much.”

Although not disclosed, many speculated that Clarkson’s team wanted to use Tubthumping’s famous single, which contains the lyrics “I get knocked down but I get up again”.

Released in 1997, the song became Chumbawamba’s most successful single, peaking at number two in the UK Singles Chart and topping the charts in Australia, Canada, Ireland, Italy and New Zealand.

Jeremy Clarkson recently sparked a major controversy after his comments about Meghan Markle, Duchess of Sussex, in a newspaper column last month.

Clarkson said he “hated it”. [Meghan Markle] at a cellular level’ and ‘dreams of the day she is forced to walk naked through the streets of every town in Britain while the crowd chants of shame’.

Prince Harry has since hit out at Clarkson, 62, in his interview with ITV’s Tom Bradby, calling Clarkson’s comments “appalling and offensive”.

In the same interview, the Duke of Sussex said the comments “encourage other people in the UK and around the world, especially men, to think that it is acceptable to treat women this way”.

I get knocked down: Jeremy Clarkson’s £30k song request turned down by Chumbawamba

The shocking moment a 72-year-old Orthodox Jew is sprayed with a...