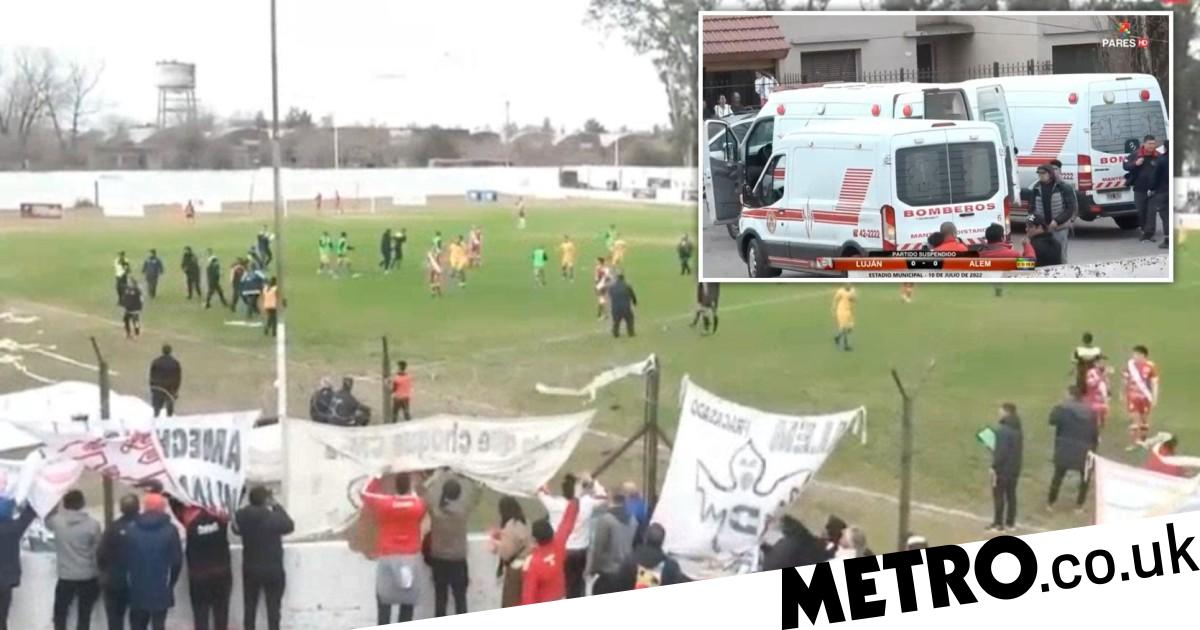 Seven people have been shot dead, including a teenager who is fighting for his life after violence erupted at a soccer match in Buenos Aires.

The fourth division match between rival teams Club Lujan and Club Alem at the Campo Municipal de Deportes stadium in the Argentine capital was suspended after just 15 minutes when a brawl broke out.

It is believed that seven people died, and about 20 were injured.

Among them is an 18-year-old boy, who is reportedly in critical condition.

Local media reported that violence broke out between fans both inside and outside the stadium.

Video from the match shows fans fighting each other and throwing missiles.

It is alleged that a ‘sound bomb’, an acoustic weapon used for crowd control, was used to disrupt the match.

It is believed that the police tried to control the crowd by using rubber bullets and then tear gas.

The injured were transferred to the nearby Nuestra Señora de Lujan Municipal Hospital.

A statement on Alem’s Facebook page read: “Unfortunately, the classic has been suspended due to incidents.

“What should be a football party has been marred by a group of violent people.”

Argentinian outlet Ole quoted coach Alem Horacio Fabregato as saying: “We are in the dressing room, we have no way to go out because we don’t have a microphone and we are waiting [to find out] how are we going to go home.

Leaders [of the club] with us, and the people of Luhansk see how we can do it [leave].

“I was the first to see that something was happening, I called the fourth official and asked him to stop the game.

“Since then they asked us to go inside the field, they started throwing stones at us and a very loud bomb fell near [dugout].

“I know something serious happened outside, but we don’t know who did what.”

Worcester’s unpaid players and staff are pleading with the owners to...