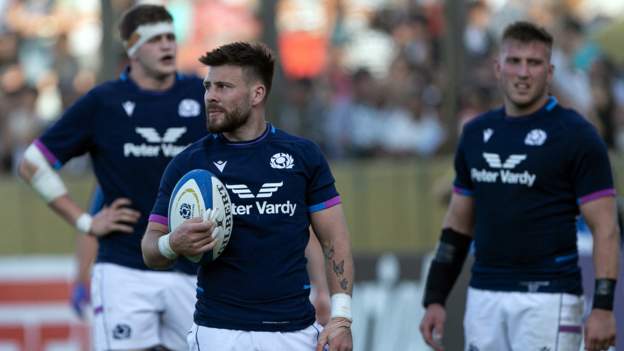 Head coach Gregor Townsend says Scotland are just “scratching the surface” after leveling the series in Argentina with a comprehensive 29-6 victory.

A dominant second half for the visitors in Salta will set up a crucial third test in Santiago del Estero next Saturday.

“We knew we would get an answer this week,” Townsend told Sky Sports.

“There’s a lot of unity in the team, it’s a group that cares about each other and about playing for their country.”

Hamish Watson, Mark Bennett, Matt Fagerson and Sam Johnson all scored tries as Scotland romped to 21 points without reply in the second half after a lackluster first 40 minutes.

The home side led 6-3 just before half-time, but top-of-the-table Watson marked his 50th cap with a timely goal, and from that point on, Townsend’s side’s attacking prowess began to shine.

“We’re scratching the surface with this performance, we’ll work hard to deliver our best performance next week,” he added.

“We started the game well. It was a mixed game after that, but at the start of the second half we really took the ball away from them.

“I thought some of the running lines and the contact effort were outstanding.

“[There are a] lots of areas for improvement but it will take a lot of hard work to win a test match in argentina. So a lot of credit to our team for that.

“We knew it would be a tough task but our team was outstanding, especially in the back row, against a quality away team in tiring conditions.

“A good foundation to build on next week and next season. We had a lot of possession in that third quarter, which was a credit to our performances in the battles and scrums.”

The only downside was injuries to defenders Rory Hutchinson and Kyle Rowe.

Townsend announced that Hutchinson is a doubt for a decision in the series, while also raising concerns that London Irish wing Rowe has suffered a “serious injury” after coming on to win his first match.

Ukraine: children among 146 bodies exhumed at the site of mass...

Sewage monitors at UK seaside resorts are either faulty or not...

Berry: Speeding and uninsured drivers were stopped in Whitefield