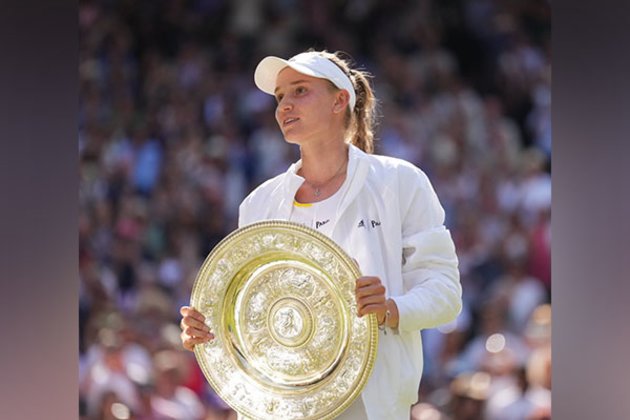 London [UK]July 9 (ANI): No. 17 seed Alena Rybakina made history by becoming the first ever Asian Wimbledon champion by defeating Ons Jabert of Tunisia in the women’s singles final on Saturday.

With it, she also became Kazakhstan’s first-ever Grand Slam singles champion, defeating her Tunisian rival 3-6, 6-2, 6-2 in a final that lasted 1 hour 48 minutes.

In this first Wimbledon title match, the 23-year-old Rybakina, the first Grand Slam finalist in the Open era, also became the youngest woman to win the title since 21-year-old Petra Kvitova, who won it in 2011. her career title. In between, she lost four straight finals, including last year’s play-off for bronze at the Tokyo Olympics.

Her rival Jabert also left the competition, creating history by leaving the venue as the first Tunisian and Arab woman to reach a Grand Slam final.

Ons Jabert of Tunisia booked her place in the Wimbledon final after defeating Germany’s Tatiana Maria in the women’s semi-finals on Thursday.

Her rival Rybakina also reached the final, defeating Simona Halep of Romania in the semi-finals.

A wearable tech firm is going global after raising £9.5m in...

Wildlife Photographer of the Year: A Collection of Works Submitted in...

New Zealand coxedge will retire after the home World Cup

“Nobody Wants To See” Tyson Fury vs Derek Chisora, who has...