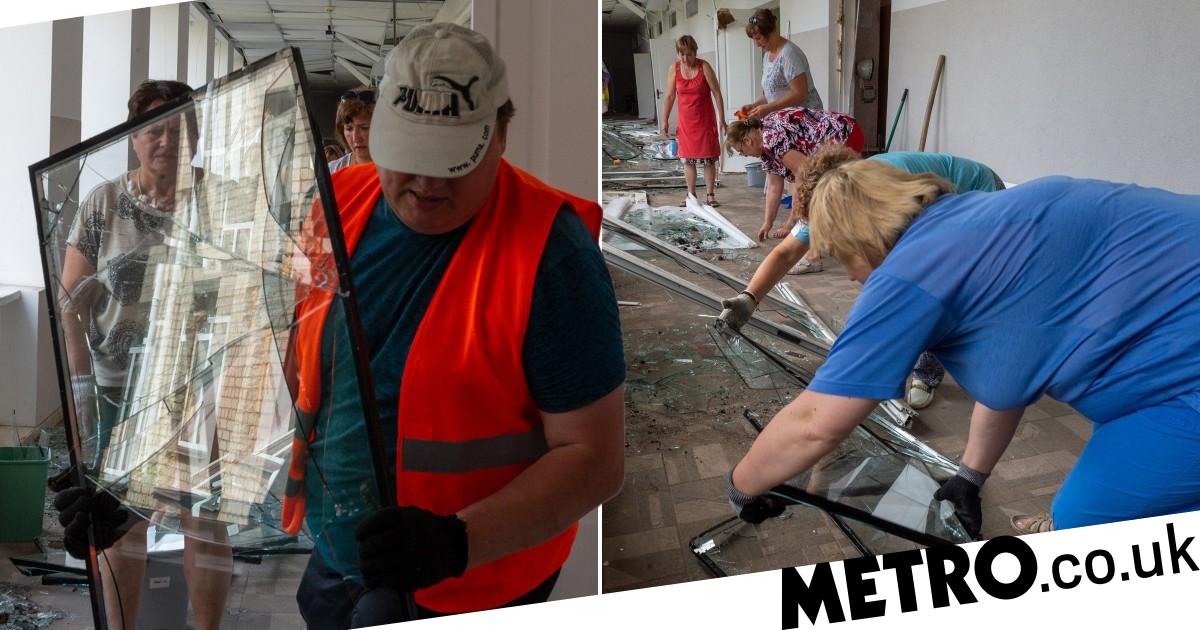 According to Ukrainian authorities, Russian shelling hit a school for visually impaired children.

It is believed that 260 students of the boarding school were sleeping in the facility, located in the east of Kharkiv, when two rockets hit the street around 1 am.

No casualties have been confirmed, but the blast blew out most of the windows and doors and destroyed school equipment, leaving hallways and classrooms littered with debris.

The mother of one pupil said “only beasts” would have carried out such an attack, in what is believed to be the third attack at a school in Kharkiv this week alone.

A part of the high school was destroyed on Monday in the Shavchenka district, and on Tuesday, the PTV was damaged.

The mother continued: “In particular, schools and kindergartens were beaten. So many destroyed schools, kindergartens, houses.”

Holding back tears, chemistry teacher Alla Danilchuk said: “I think they are [plan to] destroy our nation.

“If our children were not there, so that we would not be taught.”

School director Galina Kuklina added: “They are destroying the future of our country. Last night our school was destroyed by Russian aggression.”

Over the past two weeks, Russia has increased its bombing of the city, resulting in the deaths of many civilians, mostly in residential buildings.

Ukraine claims that these attacks are a ploy to squeeze its resources out of the main battleground in the Donbass.

Describing the past day, the head of the regional military administration, Oleg Sinegubav, said: “The occupiers continue to purposefully destroy civilian objects of the Kharkiv region, people’s houses, and farm buildings.

“Due to shelling, forest strips, fields with agricultural crops are burning, hay stocks are being destroyed.

“In the village of Kalinava of the Zolochau United Territorial Community, the occupiers destroyed a farm for growing slugs, a large-scale fire broke out, which was extinguished by rescuers.”

Russia has repeatedly denied claims that it has struck civilians, though officials have often contradicted this denial.

Liz Truss is still in charge, the new chancellor insists