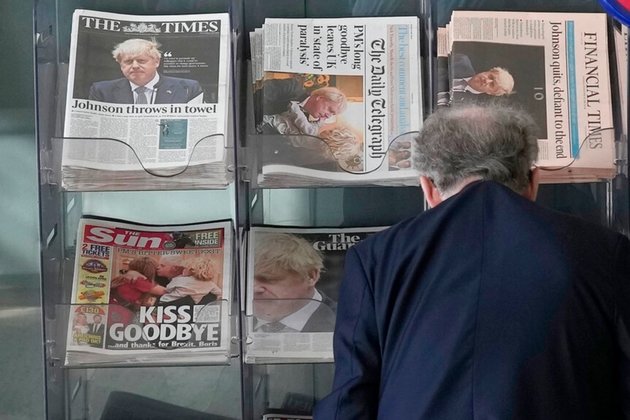 LONDON – Four more candidates have joined the increasingly crowded field of Conservatives vying to succeed Boris Johnson as British prime minister, as the committee overseeing the contest seeks to speed up the process of whittling down the numbers.

The so-called Committee of Conservative Legislators of 1922 will set out the exact rules and timetable for the contest next week after Johnson was forced to leave his party. Many lawmakers are pushing for an expedited process.

The Mail on Sunday reported that Foreign Secretary Liz Truss will launch her campaign on Monday promising to cut taxes and tackle the cost of living crisis, while one of her main rivals for the role, Defense Secretary Ben Wallace, has ruled himself out.

“My aim is simple: to bring the opportunities that were afforded to my generation to all Britons, whoever you are and wherever you come from. To strengthen the ship and stabilize the economy,” Sky News quoted Zahavi, who Johnson appointed as finance minister on Tuesday after Sunak’s resignation, as saying.

Shapps told the Sunday Times he would rule out a national election if successful, but would prepare an emergency budget within the first 100 days that would cut taxes for the most vulnerable and provide government support for energy-intensive companies.

Hunt, a former foreign and health secretary who lost to Johnson in the 2019 leadership race, and Javid, a former finance minister, have both said they would cut corporation tax to 15% as leader.

Javid, whose resignation as health secretary on Tuesday helped increase pressure on Johnson to step down, also said he would reverse the increase in social security contributions that took place in April.

“We cannot afford not to cut taxes,” Javid told the Telegraph.

Conservative lawmakers will hold a series of votes to narrow the field to two final candidates, who will then face a postal vote by the wider Conservative Party membership.

“Obviously what we’d like to do, and I think even the candidates will recognize that, is eliminate some of those who clearly won’t get enough support to get into the bottom two at a relatively early stage,” Committee 1922 Treasurer Geoffrey Clifton-Brown told Times Radio.

Clifton-Brown said this could be done by increasing the number of signatures from other Conservative lawmakers needed to be nominated and by raising the threshold of votes candidates must receive to advance to the next round.

“I think we will be able to set up the process to actually come up with two names by the time parliament retires on July 20,” he said. “We should have an answer by the party conference in October, or maybe before that.”

Wallace, whose popularity has soared thanks to his handling of the Ukraine crisis and was considered one of the favorites, ruled himself out on Saturday.

“It was not an easy choice to make, but I am focused on my current job and keeping this great country safe,” he wrote on Twitter.

Why are emergency workers on strike? Will the army help?

The problematic arrival of anti-obesity drugs

Is it too late to ditch Netflix and Tesla and invest...

Democrats call for ban on church youth camps amid row over...