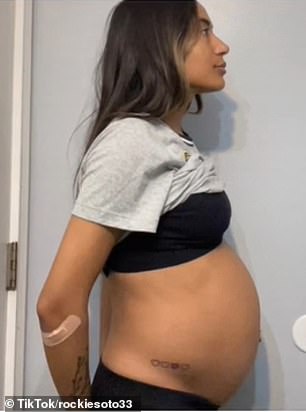 A woman whose pain during sex was blamed by doctors on her partner’s penis being “too big” had a 10.5-pound ovarian cyst containing a gallon of fluid removed from her abdomen.

Raquel Rodriguez, 25 years old, from the village of Minnesotawent to the doctor five years ago with this problem and said she also experienced sudden attacks of pain.

A scan at the time revealed she had an 8cm cyst – or fluid-filled sac – on her ovary the size of a softball, but doctors said it did not need to be removed.

However, last year the cyst began to grow rapidly and eventually became so large that the preschool teacher looked “pregnant.” Her friends even started asking her why she didn’t tell them she was “expecting.”

Four weeks ago, Rodriguez underwent two-hour surgery at Memorial Hospital to remove the cyst, and she recovered so well that she went grocery shopping a week later.

Revealing the story on TikTok, Rodriguez said the tumor had grown to 28cm across, the maximum size for an ovarian cyst.

She said her right ovary and fallopian tube, where the cyst was, had to be removed during the surgery, but the left one is still intact.

It’s unclear what caused the cyst, but Rodriguez said it could have been related to a urinary tract infection and sepsis she suffered in 2017. 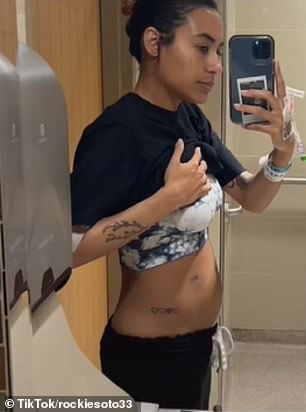 Raquel Rodriguez, 25, of Minnesota, went to the doctor five years ago with this problem and said she also experiences sudden attacks of pain. She is pictured (left) before surgery and (right) after surgery 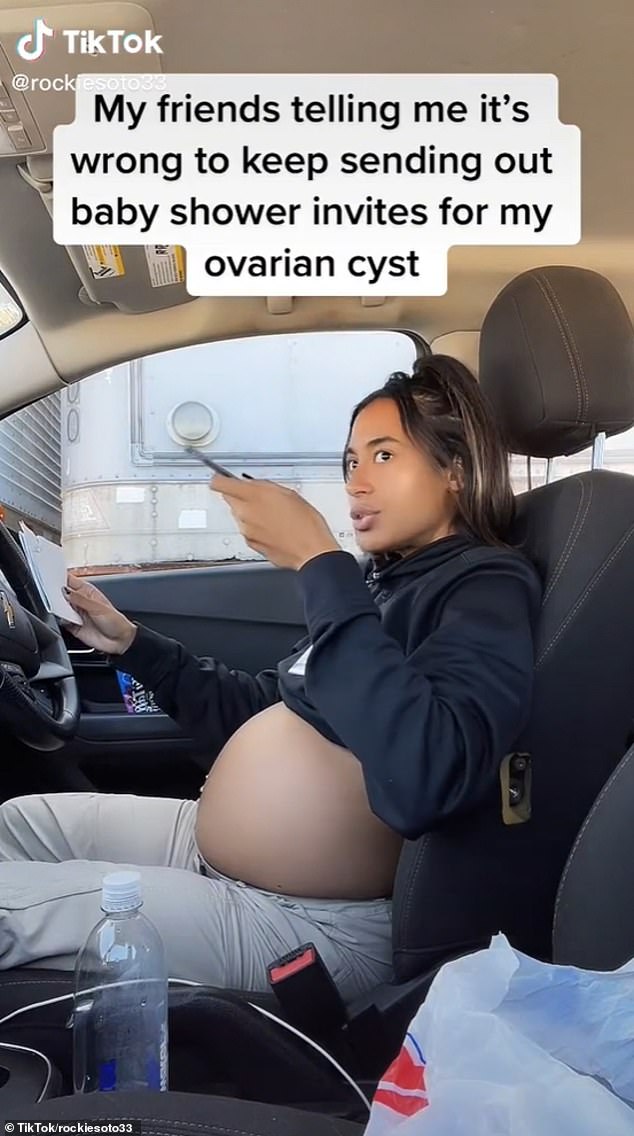 The ovarian cyst eventually grew to 28cm across and contained a gallon of fluid, the equivalent of seven Gatorade bottles 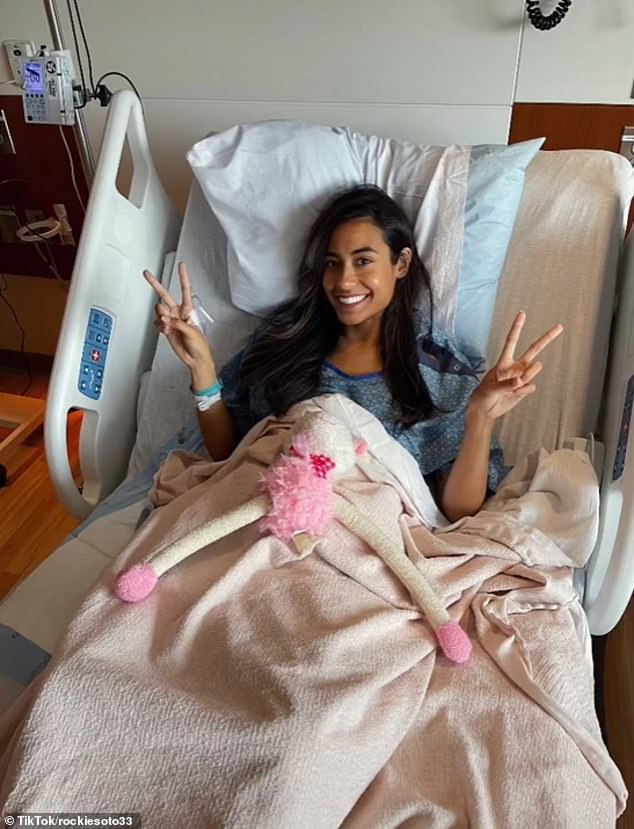 Rodriguez is pictured above after surgery to remove an ovarian cyst. Four weeks later, she says she feels fine 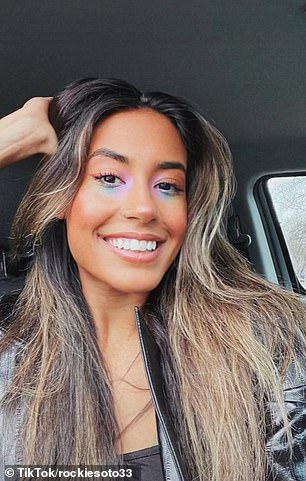 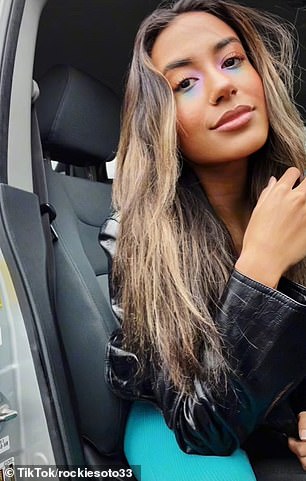 Rodriguez had the tumor removed during a two-hour procedure in Minnesota and was discharged a week later. The next day she went to get groceries

Ovarian cysts are when a fluid-filled sac often forms on the side of the ovary during ovulation, when an egg is released.

They can also be caused by pelvic infections, hormonal problems and endometriosis – when the tissue that normally lines the uterus grows outside of it.

Doctors say that ovarian cysts are generally “very common” and usually go away without causing any symptoms.

What is an ovarian cyst?

An ovarian cyst is a fluid-filled sac that develops on a woman’s ovary. They are very common and usually do not cause any symptoms.

Most ovarian cysts occur naturally and disappear after a few months without the need for treatment.

An ovarian cyst usually only causes symptoms if it ruptures, is very large, or blocks the blood supply to the ovaries.

An ovarian cyst can sometimes also be caused by an underlying disease such as endometriosis.

The vast majority of ovarian cysts are not cancerous (benign), although a small number are cancerous (malignant). Cancerous cysts are more common in postmenopausal women.

Surgery may be needed to remove the cysts if they are large, causing symptoms, or potentially cancerous.

But some types — like the mucinous cyst that Rodriguez had — don’t go away and can get bigger if they’re not removed.

Symptoms of the disease include bloating, swelling and pain in the lower abdomen. In cases where they rupture, they can also cause severe pain.

Most women diagnosed with cysts are offered painkillers and prescribed hormonal pills to help regulate ovulation.

But those who have more serious forms of the disease will be offered an operation to remove them.

Describing when doctors refused her surgery, Rodriguez said she explained to the male doctor that she was in “excruciating pain.”

She added: “He was a man and he told me the pain I was feeling was probably because my partner was ‘too big’ and I should be having ‘less sex’.

Other doctors told her that the pain was most likely just cramping or bloating and not to worry.

Rodriguez said that even though the cyst was seen, the doctors weren’t too concerned and sent her home.

Dr. Tarane Shirazian, director of the Fibroid Treatment Center at New York University Langone Health, said TODAY they had to do surgery when they found the cyst.

“Mucinous cysts do not resolve on their own like normal cysts, which usually come and go with a woman’s menstrual cycle,” she said.

“They either just hang on the ovary and stay the same size, or they can grow — and they grow pretty fast.”

Shirazian said doctors should worry about them if they are larger than 5 cm, but when Rodriguez was diagnosed, he was already 8 cm.

Rodriguez said she generally has an “athletic” build and is quite “petite.”

But around her 24th birthday – after being turned away by doctors – family members noticed she was starting to look more bloated.

Describing when the cyst became quite large, she told TODAY: “I looked and felt pregnant.

“I had shortness of breath, I was bloated and I was writing all the time. People asked me: “When should I?” I’ve had friends say, “I didn’t know you were pregnant! Why didn’t you tell me?” 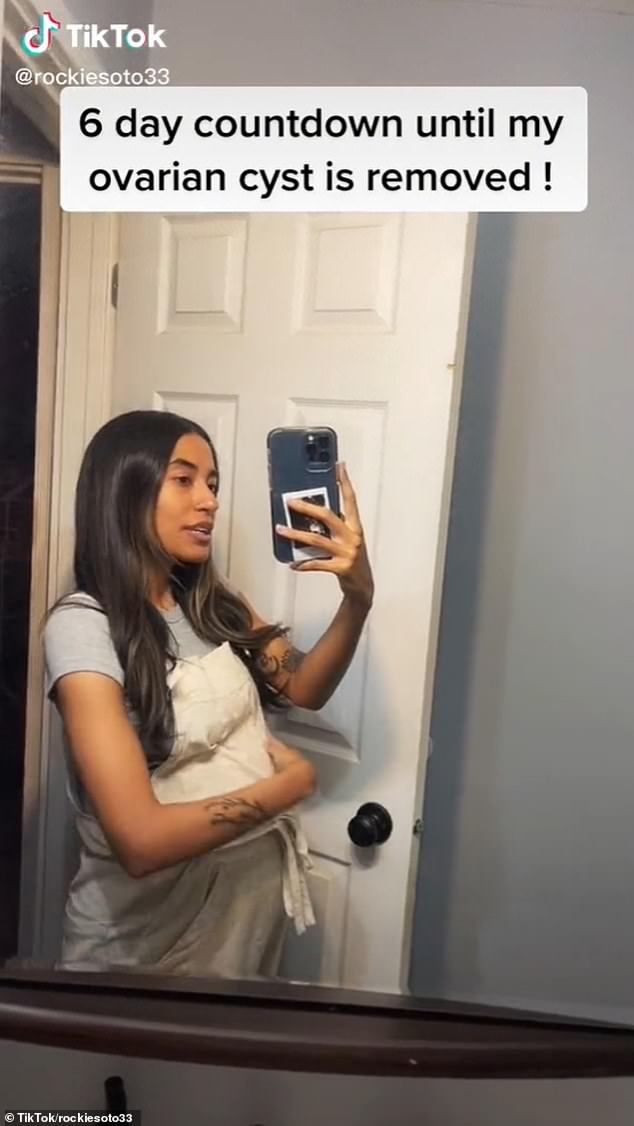 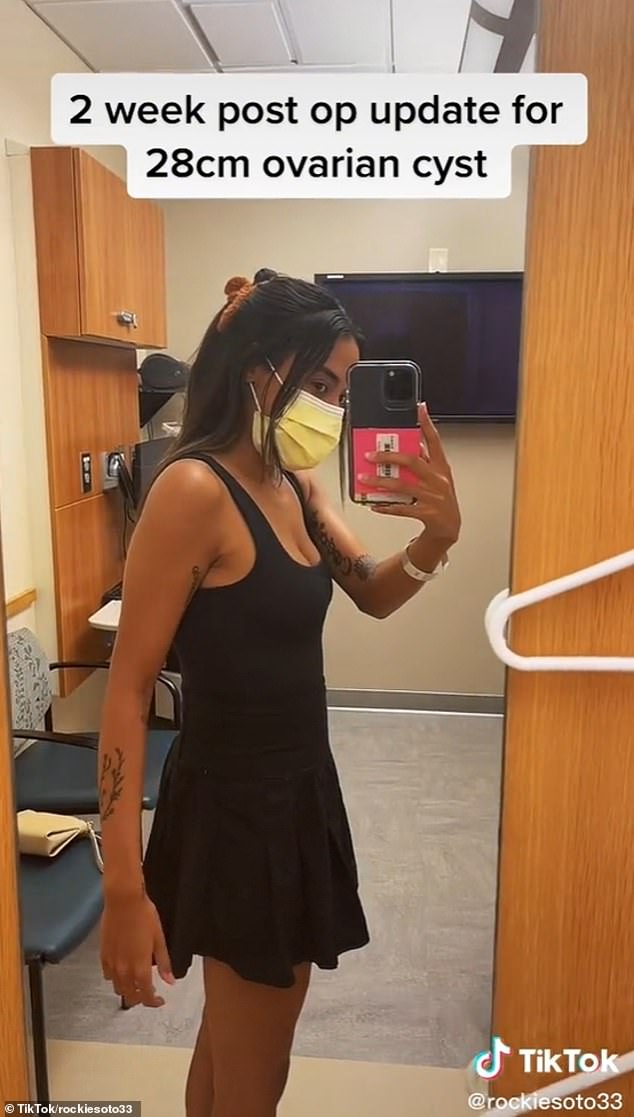 “I’m laughing now, but it’s not really funny,” she said. “My hair was falling out, I was in a lot of pain and I was losing weight without trying.”

A few days before the operation, her friends organized a holiday party to highlight the situation, and hung a banner with the inscription: “It’s a cyst!”.

After the surgery, Rodriguez said her stomach felt “smaller” and like she had lost a lot of weight.

After about a week, she was able to go to the supermarket again and do other things.

In an update a week after the operation, she said: “I’ve been doing really well, I’m going grocery shopping now.

“So far everything is fine. They did say there would be a lot of bloating and swelling because I still have a lot of fluid, but my body should absorb it and I should be good.’

The mass grave of the victims of Nazism was found in...

‘He raped me, beat me half to death and strangled me’:...

Britain must reform, not raise taxes, a group of MPs and...

The role of Haley Lou Richardson is open to people we...